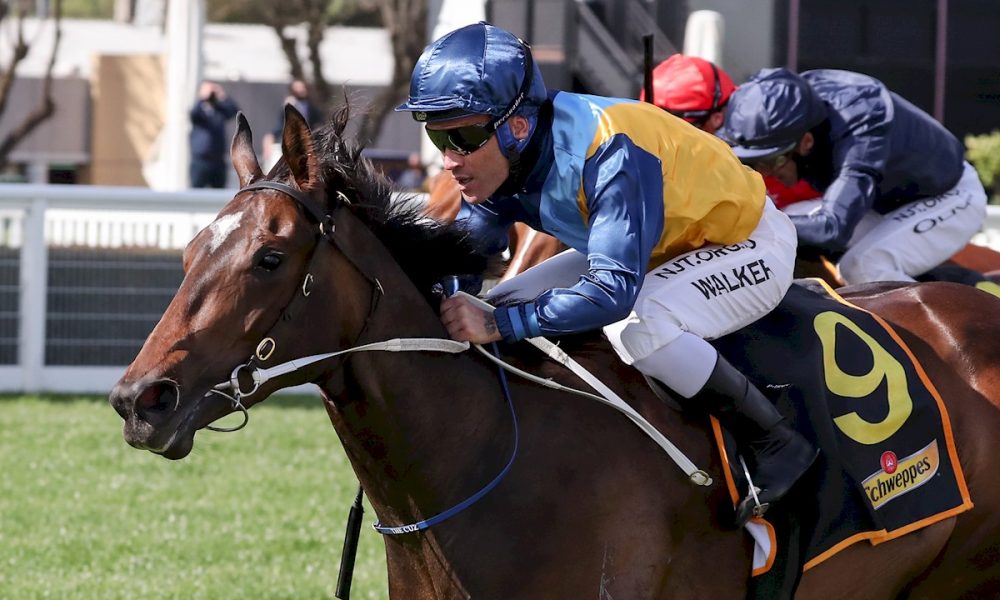 The $7.5 million Golden Eagle (1500m) is firmly on the radar of Group 1-winning filly Odeum (Written Tycoon) but not before she attempts to take out a second race at the highest level this season, taking on the older mares to bring down the curtain on a stellar three-year-old season.

Co-owner Sheamus Mills yesterday outlined the longer-term plan for the MRC Thousand Guineas (Gr 1, 1600m) winner, revealing that the lucrative Sydney race, restricted to four-year-olds, was the favoured option next campaign rather than chasing the more traditional spring black-type races in Melbourne.

Odeum, who was a gallant second behind Brooklyn Hustle (Starspangledbanner) after being caught wide in the Dane Ripper Stakes (Gr 2, 1300m) at Eagle Farm on Saturday, will press on to the Tattersall’s Tiara (Gr 1, 1400m) on Saturday week in Brisbane before trainers Mick Price and Michael Kent Jr map out a campaign towards the Golden Eagle at Rosehill on October 30.

“We have thought about (Odeum’s spring campaign) reasonably extensively, actually, and we’re thinking that we’ve been keeping her preps short, sharp and light just to look after her,” Mills said yesterday.

“I don’t see any reason why she’s not going to continue to develop as a four- and five-year-old, so I think it will pretty much be the same formula. My thoughts are to give her two runs in Melbourne and then target the Golden Eagle.

“I think the 1500 metres is her right trip. She obviously goes well on her Sydney leg. She’d have to take on Ayrton, but they don’t give away these races and I think she’s up to it.”

The merits of such a rich restricted prize-money race, seemingly at the expense of the “pattern”, has and will continue to be debated, particularly in the context of the ongoing NSW versus Victoria racing bodies competition, but it is hard to ignore the fact that many owners and trainers choose the money over Group racing with the “pop-up” races.

On Saturday, Price indicated that Odeum’s stablemate Ayrton (Iffraaj), who bounced back from a shock defeat to take his record to four wins from five starts in Saturday’s Gunsynd Classic (Gr 3, 1600m) at Eagle Farm, would also be aimed at the Golden Eagle next preparation rather than races such as the Cantala Stakes (Gr 1, 1600m) at Flemington which falls on the same day.

Mills reasoned that Odeum could tackle an Empire Rose Stakes (Gr 1, 1600m), a race she ran second in last year, as a five-year-old.

“She goes (well) that (clockwise) way, the trip’s beautiful for her, she’s run well at Rosehill against Isotope and I think with the timing, it’s pretty good for her. She can have a little break in the sunshine (in Queensland) after the Tatt’s Tiara.”

Early indications from Price were that Odeum, who is being trained during her Queensland campaign from Steve O’Dea and Matthew Hoysted’s stables at Eagle Farm, had pulled up well from her Dane Ripper run.

“James (McDonald) got off and apologised for the ride a bit, but I think he was totally a victim of circumstances,” Mills said.

“We were coming off her horrible beginning in the Coolmore Classic when she missed the start by four lengths and she was slowly away when she got beaten a lip by Isotope in the Darby Munro as well.

“We took all the gear off, she went to Pete (McMahon’s) at Kolora Lodge and they did a bit of barrier work with her, a little bit of dressage, got her mind in the right spot and she was good in the gates on Saturday.

“Seven weeks between runs and four deep, punching the breeze is not easy at the weight scale especially, but I was very proud of her.”

In recent years, Melbourne-based Mills has been putting together a select group of high-end race fillies with staunch clients Heath Newton and Anthony Roberts’ Chesapeake Thoroughbreds.

Scientific approach taken with Queen Of The Green

Odeum is the ladder leader of the Mills-managed group thus far, but the agent hopes two-year-old Queen Of The Green (Written Tycoon), a $1.5 million Magic Millions purchase in 2020 and a daughter of high-class sprinter Karuta Queen (Not A Single Doubt), can follow suit.

She has been carefully managed by trainers Tony and Calvin McEvoy and her owners from the time she was broken in.

Mills compared the filly’s size and bulk to champion mare Black Caviar (Bel Esprit) who trainer Peter Moody had to monitor throughout her career due to her weight and size.

“They gave her two weeks of pretty solid work and she had put on 20 kilos while in work,” he said.

“She weighs in at 586 kilos as a two-year-old filly, so she looks absolutely fantastic, but she is a beast. I have enlisted the help of Dr Brian Anderson at Ballarat (Equine Clinic).

“He described her as a four-year-old entire with a two-year-old filly’s skeleton and his suggestion was to be mindful of what you do with her.

“He has been really, really good. He has helped us to devise a program. She has done a lot of treadmill work, a lot of swimming. She hasn’t done a lot with anyone on her back.”

Queen Of The Green is currently on the water walker and treadmill at Leneva Park.

“What I have noticed in the past ten years is that there is a real shift in thinking about how to train these horses,” he said.

“You look at Peter McMahon’s place at Kolora Lodge, doing the dressage and so on, trainers are embracing more modern methods. It is something that I have enjoyed being a part of with Queen Of The Green because, if she is going to be good, she can be good at any age or stage.

“You don’t have to be early to be good. Odeum didn’t run until August of her three-year-old year and this filly is on track for that.

“We’re just mindful of not pushing her too early and taking that more scientific approach. We’ve done bone scans, not regularly, but enough to know what’s really going on. While she has had no issues, I’ve got really patient owners who want to see the best out of their horses and enjoy the experience of taking a slightly different approach on how to train her.”

Mills also said yesterday that his latest high-priced yearling purchase, the $1.95 million I Am Invincible (Invincible Spirit)-Hips Don’t Lie (Stravinsky) filly bought from the Inglis Australian Easter Sale in April, was one week into a four-week spell following her breaking-in preparation.

She will then head to Price and Kent Jr’s Caulfield stable to continue her education.

Mills is also about to make the move to Romsey, north west of Melbourne, to a 15-acre property, but don’t expect him to be competing in the agistment and foaling down business despite being about ten minutes from stallion operations Spendthrift Australia and Widden Victoria.

He has named the property Kilcoole Park after the town in Ireland where his late mother Eithne was born.

“It’s a little lifestyle farm, it’s not going to be a commercial operation. I’ll probably put my own mares on there, the two or three broodmares that I just tinker around with, the fillies who I have raced that I love,” he said.

“I’ll put an arena on there and that sort of stuff to get the little fella out of Melbourne … but Odeum won’t be agisting there any time soon. I’ll leave that up to the professionals.”