Sprinters are shaping up for a worthy Sha Tin showdown 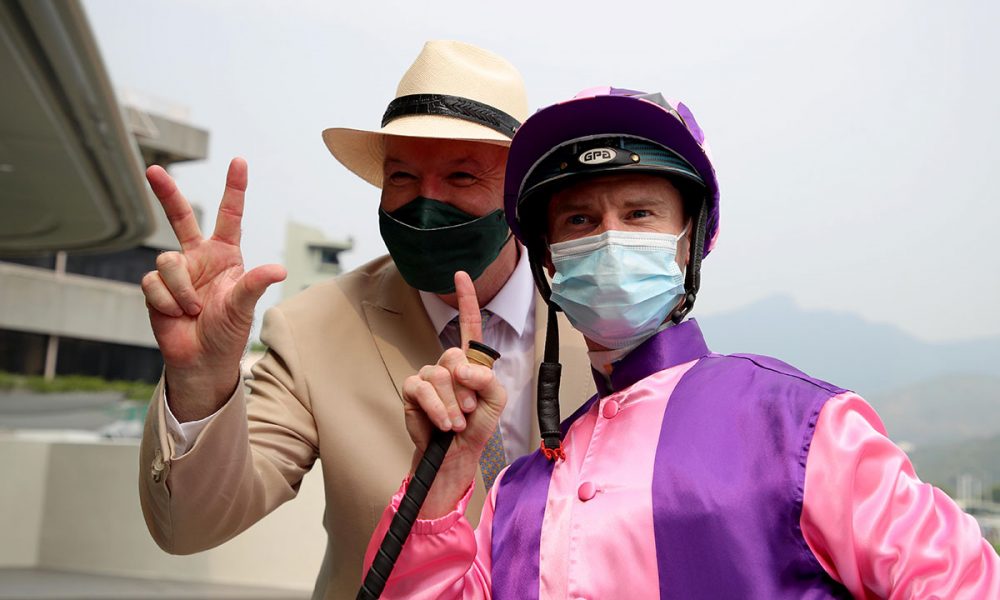 Pixie Knight (Maurice) emerged as the new star on Japan’s sprinting block with an impressive performance in the Sprinters Stakes (Gr 1, 1200m) at Nakayama on Sunday that could well see him pointed towards Sha Tin to shake-up the Hong Kong contingent on the second Sunday in December.

Trainer Hidetaka Otanashi is believed to be contemplating taking the Hong Kong Sprint (Gr 1, 1200m) route that worked out so well for Japan’s Danon Smash (Lord Kanaloa) last year and for the great Lord Kanaloa (King Kamehameha) in both 2012 and 2013. And, in his post-race comments via the JRA, jockey Yuichi Fukunaga said tantalisingly that the three-year-old would be “a target to beat in numerous future sprint races in or outside” of Japan.

After streaking up the Nakayama incline two lengths clear of his rivals in a time of 1:07.01, Pixie Knight would head to Sha Tin as a prodigious candidate for the Hong Kong Sprint. That would be a fitting destination for the first Group 1-winning son of Shadai’s Arrowfield shuttler Maurice (Screen Hero), given that his sire earned three Group 1 titles at Sha Tin with wins in the Hong Kong Mile (Gr 1, 1600m), Champions Mile (Gr 1, 1600m) and Hong Kong Cup (Gr 1, 2000m).

“He was impressive and if he were to come here, I’d be thinking he’s a threat,” Purton told Asia Bloodstock News. “I think he’d be a threat because he’s got great speed, he put himself in the right spot, they ran a lightning-fast time, they were going quick; we know in Japan that they run quick times anyway because of the rolling start that they have but that’s still a pretty fast time. I’ve ridden at that track and it’s uphill in the straight which adds more weight to his win. He’s a young horse on the way through.”

The Hong Kong sprint ranks were conspicuously thin on top talent last season, lacking the depth of quality for which the circuit is so famous – more so when Classique Legend (Not A Single Doubt) returned to Australia and his short-time Caspar Fownes-trained stablemate Aethero (Sebring) remained sidelined – but Wellington’s (All Too Hard) success in the Chairman’s Sprint Prize (Gr 1, 1200), at age four, and the emergence of a number of exciting young prospects means that Pixie Knight could well face a stiffer test than did Danon Smash last December, should he make the journey.

Purton has a couple of those bright young hopes in his book right now. Last Friday at Sha Tin he enjoyed an exhilarating ride on the latest Hong Kong boom horse, the David Hayes-trained Nervous Witness (Silent Witness), while the previous weekend he piloted that strapping gelding’s similarly eye-filling stablemate Naboo Attack (Warhead) to a very good second that held the promise of big-race aplenty.

After only two starts for two wins, Nervous Witness is six months away from a Group 1 tilt, if indeed he develops as those closest to him anticipate, but Naboo Attack – a five-time winner for Steve Tregea in Queensland pre-import – looks set for a Hong Kong Sprint campaign, all things being equal.

“Naboo Attack will, for sure, go to the Hong Kong Sprint: he’ll run on October 17 in the Premier Bowl, which unfortunately I can’t ride him in because of the handicap; after that the plan will be to run in the Group 2 in November and then he’ll go to the Group 1 in December. That’s his programme now,” continued Purton.

But the rider does not view the five-year-old Australian import as a pure sprinter and even believes Naboo Attack could yet trouble Hong Kong’s current champion over farther than 1200 metres.

“That frees up the options for ‘Hayesy’ and myself; that means Nervous Witness can come through towards the sprint and Naboo can go to the mile (in April). We’ll take it one race at a time and see where we get to.”

“If we’d had a clear run, we would have won, but we had to come around, giving the winner 20lb and beaten half a length taking ground off him, so it was outstanding. He’s a big player, he’s top-class. He’s the real deal,” Fownes said, while also noting that the Premier Bowl Handicap in 11 days’ time will provide more insight.

“We still haven’t seen a couple of really good horses come out yet, like Wellington and Courier Wonder. The sprinting ranks feel strong, so it’s a case of once they start to race, we’ll know how good they are, but Wellington’s proven at Group 1 level last year and Courier Wonder certainly looks to be a Group 1 horse on what he’s shown so far,” he continued.

“The intention is to run Wellington in the Premier Bowl. At this stage of the season, you just concentrate on what’s in front of you and you’ve got enough work to do concentrating on your own horse to start to worry about the opposition,” said trainer Richard Gibson, who offered a pragmatic take on the untried hype horses.

“We see it so often, that these horses look so smart in their current company and time will tell when they’re equal weights against the big boys. The sprint game is a cruel game because if you go to the races and you’re drawn 12, you’re in big shtook against these good horses, so you can only concentrate on your horse because on a bad day you can be wiped out by the draw in a sprint.”

That is so often the case, and yet, if a horse is a bona fide champion, even the draw sometimes cannot rein in their superiority, as Lord Kanaloa showed when he overcame gate 12 of 12 and smashed his rivals by five lengths and more in winning his second Hong Kong Sprint.

Pixie Knight has some way to go to be rated in that category but he showed enough in defeating the top-class filly Resistencia (Daiwa Major) in the Sprinters Stakes that he could be out of the top bracket and, as a three-year-old with three wins on the board from only eight starts, he too has scope for further improvement.

While Angel Bleu might yet be one for the 2022 Hong Kong International Races, Chan and trainer Ralph Beckett are weighing up Kinross’ participation at this December’s showpiece. The Lawn Stud-bred gelding landed the Lennox Stakes (Gr 2, 7f) at Goodwood this summer and is rated 115 but connections are conscious of the likelihood of fast going for their gelding who has thrived with cut in the ground this season

Meanwhile, one horse who definitely will not be in action in December is Aethero, the fleet-footed Nervous Witness of his day, cruelly curtailed by physical frailties. Fownes gave an update on the 2019 Hong Kong Sprint third, who bled from both nostrils in the 2020 Chairman’s Sprint Prize and has suffered with tendon troubles since. His recovering tendon was due to be scanned yesterday.

“He’s still in work, he hasn’t been put under pressure,” Fownes said. “If we’re happy (with the scan), we’re going to start to increase the workload: load it some more with a bit of pace work and hope that it holds. If it holds, we’ve got a horse. I’ve certainly fixed him internally, now we’ve just got to hope the tendon stays on our side.

“We’re not even looking at a return date. At this stage we have no exact plans until we start to give him more workload, so fingers crossed.”