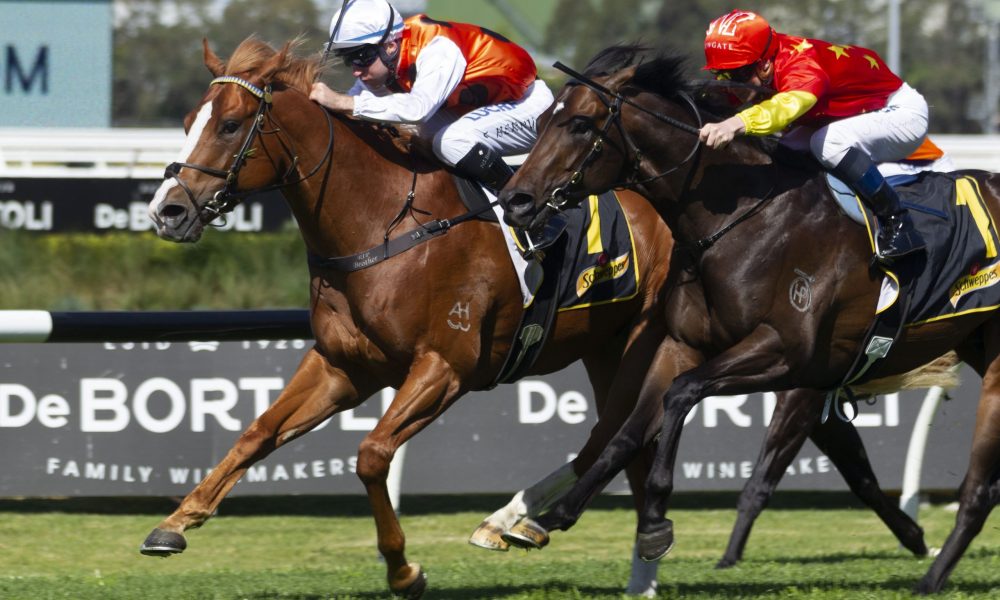 Having his first start since finishing second to Cosmic Force (Deep Field) in the Roman Consul Stakes (Gr 2, 1200m) at Randwick in October, Standout settled back in fifth place before running on strongly for a very easy win.

Standout defeated three-time Group 1–winning mare Alizee (Sepoy) by a length and a half in the good time of 1:09.56 for his fourth win in five starts.

The race featured a strong pace, which was established by noted front-runner Irithea (Snitzel), who clocked the first 1000 metres in a very smart 57.76.

The tempo suited Standout and he probably produced the best performance of his career to date in winning the weight-for-age feature, certainly judging by the manner in which he won and the standard of his sectionals times.

The runner-up Alizee, who was also resuming from a break, settled in last place in the seven-runner field, took a spli t under Hugh Bowman on straightening, went to second at the 100 metres and then battled on very well, albeit without threatening the winner.

The consistent mare White Moss (Mossman), who had tracked the leader, also did well in fighting on gamely for third at her first run since May, and she too looks set for a good preparation.

The fourth-placed Kolding (Ocean Park), who was having his first start since taking out the inaugural $7.5 million Golden Eagle (1500m) at Rosehill in November, also caught the eye.

Again ridden by Glen Boss, Kolding settled back in sixth place, improved on turning for home and kept making ground to finish two and a quarter lengths from the winner.

Earlier in the day at Randwick, talented filly Away Game (Snitzel) followed her impressive late-closing victory in the Magic Millions 2YO Classic (RL, 1200m) on January 11 with a very smart performance when winning the Widden Stakes (Gr 3, 1100m).

Taken to the front on this occasion after working in the early stages, Away Game travelled well for Tom Marquard before drawing away to score decisively by two and a quarter lengths in a time of 1:04.42 (11.71 200m rate), equivalent to 1200 metres in 1:10.27.

It was Away Game’s third win in four starts and she was backing up after her strong late-closing victory at the Gold Coast, in a race of totally different circumstances, which demonstrated the versatility and quality of the Ciaron Maher and David Eustace-trained filly.

In the following race, her stablemate Prague (Redoute’s Choice) took his record to two starts for two wins, advancing from his debut victory in a two-year-old maiden (1200m) at Canterbury on January 17 to take out the Canonbury Stakes (Gr 3, 1100m) in very good style.

Also ridden by Tom Marquard, Prague settled outside the leader Nitrous (Deep Field), got the upper hand halfway down the straight and then drew away to score by a length and three-quarters from the Breeders’ Plate (Gr 3, 1000m) winner Global Quest (More Than Ready).

Having his first start since his late-closing victory in the Caulfield Guineas (Gr 1, 1600m) on October 12, Super Seth settled closer than anticipated in third place on the rails before overhauling the leader Free Of Debt (Unencumbered) to win by a length and a quarter.

The time on the soft 7 track was a reasonable 1:12.83. That was mainly due to a moderate first 200 metres in 14.38 – the pace was actually quite sound in the conditions from that point.

Super Seth naturally clocked faster splits, with his final 1000 metres in 57.95, and the quality colt now looks primed for another very good preparation.

The favourite Dalasan (Dalakhani), who was also resuming, settled further back than expected after being a bit slowly away. He did well on the watch in making up late ground from second last in the six-runner field to finish third, a head behind runner-up Free Of Debt.