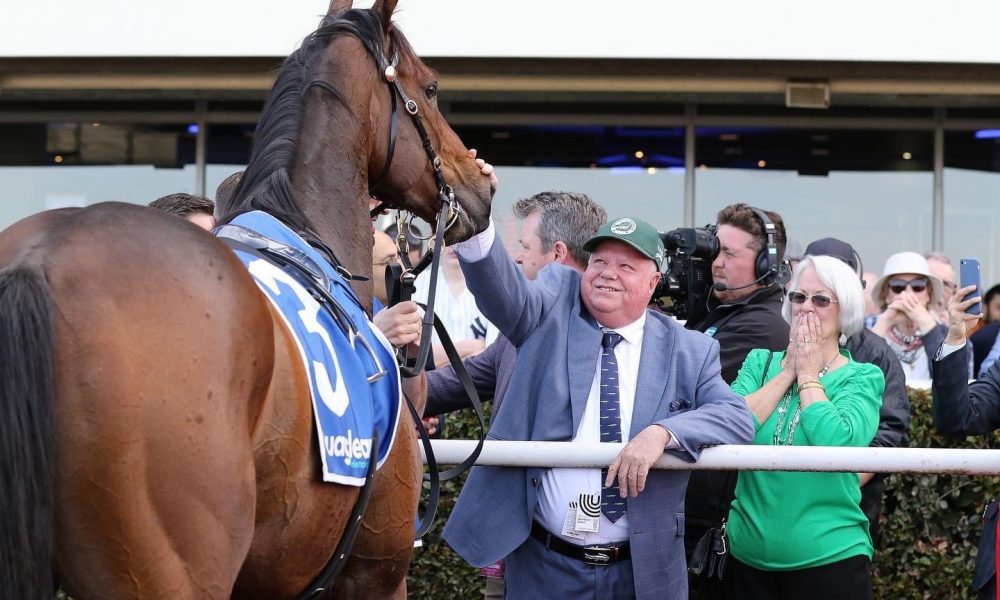 After Alligator Blood’s (All Too Hard) win in the Underwood Stakes (Gr 1, 1800m), Adrian Bott described him as having had a “colourful career”.

He’s not wrong about that! And yesterday’s result added another twist to the tale of the horse they call ‘Al”.

It was a case of third time lucky for Harvey’s famous blue and white silks as Alligator Blood had carried the colours twice before – when he was seventh in the Memsie Stakes Gr 1, 1400m) and second in the Maybe Diva Stakes (Gr 1, 1600m).

As you would fairly expect, there were mixed feelings for his two longest-standing owners Jeff and Robyn Simpson who are Endresz’s aunt and uncle and have been involved with the controversial horse since the day they bought him off Harvey at the Magic Million Gold Coast Yearling sale in 2018.

Jeff and Robyn have been involved in Endresz’s Ezybonds Syndicate since 2016, but now with Endresz not permitted to race horses in NSW or Victoria, they have had to go it alone.

“It was very sad, but Gerry has been fantastic, he has been wonderful,” Jeff Simpson told ANZ Bloodstock News.

“Things happen, but I think they have been very unreasonable.”

Jeff and Robyn are very involved owners and have been close to Alligator Blood throughout his career. When he was trained in their home state at the Sunshine Coast, Jeff would get up in the early hours and attend trackwork at 4am three times a week.  He would also regularly accompany the horse on his special trips to the beach.

The beach, says Jeff, has been instrumental in the horse’s turnaround both mentally and physically, and since he’s been trained out of Melbourne this campaign, he’s been a frequent visitor to Altona Beach.

“When he gets there, he just wants to get on with it. He’s like a young kid with a surfboard, he loves it.”

I asked Jeff whether their hands-on approach to Alligator Blood has changed at all since Harvey became involved in the ownership group.

“He lets us do our own thing. He said you guys have known the horse since day one, so keep doing what you have been doing. I’m happy to sit there and watch him run.”

Jeff and Robyn like to get to the races whenever they can to see him run and they were right in the thick of the action at Sandown yesterday, when the crowd roared for the horse over the last furlong.

“It was the best reception we have had since all the kerfuffle. Sandown made us feel really welcome, it was fantastic.  Everyone after was congratulating us. They know the horse and everything he has been through,” he said.

Yesterday’s Underwood victory was the third Group 1 win of Alligator Blood’s career and all the success is still a bit hard to believe for Jeff and Robyn.

“When we first purchased him, we would have been happy to win a class 6 at Eagle Farm. You don’t know how far they are going to go.”

Now racing’s most colourful equine character could take them on a journey to Moonee Valley next month for the Cox Plate (Gr 1, 2040m).