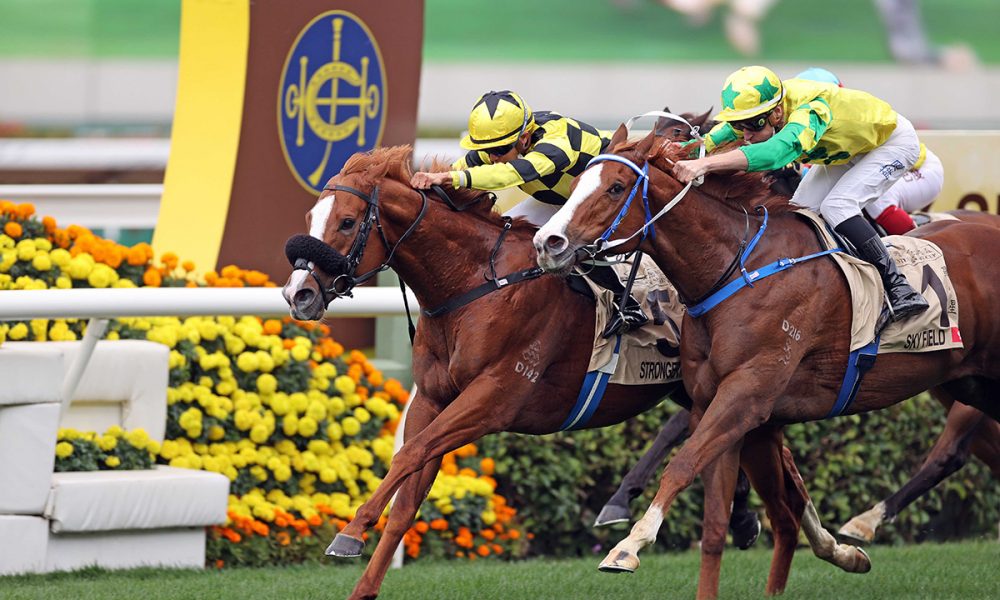 Revered as the most successful rider in Hong Kong racing history with 13 jockeys’ championships and a record 1,813 wins, Douglas Whyte forged new territory yesterday when Stronger (Not A Single Doubt) provided the South African with his first major victory as a trainer with success in the Centenary Sprint Cup (Gr 1, 1200m).

The diminutive chestnut upstaged Hong Kong Sprint (Gr 1, 1200m) champion Sky Field (Deep Field) by a head under Vincent Ho after a protracted battle over the final 400 metres, with another Group 1 winner Hot King Prawn (Denman) a further half-length away in third place.

Whyte’s satisfaction was manifold, joining the select ranks of trainers to have succeeded at Group 1 level in Hong Kong, while the success also vindicated his faith in a horse he has repeatedly praised for his honesty despite his relative size.

“I’ve had numerous (Group 1) wins as a jockey, so to get the first one on the board as a trainer is great. I’ve been stiff a few times, but it’s a good feeling,” said Whyte, who accumulated more than 20 major victories as a jockey.

“Stronger came out of that International run significantly injured. He was lucky to get away with the (leg) injuries that he had, but he pulled through and we sent him up to Conghua for a while and brought him back and trialled him and got his confidence back.

“Since that trial, he hasn’t put a foot wrong.

“He’s been a bit unlucky, he’s been a bridesmaid a few times, he’s had a few excuses but today everything went his way and he can do something like that when he gets the run he got today.

“His trial last week he indicated he would arrive in great shape but, I tell you, today was the longest 400 metres of my life so far. The winning move was putting him to sleep and coming out wide and the second horse (Sky Field) had to come around us and sort of push us along.

“Look, he was vulnerable but he dug deep and that’s all that matters. It was a very long 400 metres.”

Whyte singled out Ho for praise after he had settled Stronger seventh of the eight runners before allowing the Not A Single Doubt (Redoute’s Choice) entire to fan to the middle of the track to build momentum from the corner.

“Vincent gets his head in the right place in these big races. He’s riding to perfection and he should be. He’s come through the grades fantastically.

“I’ve just got to say thank you to the owner for sticking with me and believing in the horse because he was always going to do something like this. To eventually get that Group 1, it’s a very significant, great feeling.”

“Stronger, if it’s on his day, he’s always there and the pace was on today. It just worked out beautifully for us. He’s such a good fighter and when horses come close to him, he wants to fight more.”

Stronger is the first foal out of winning dam Star Pupil (Starcraft), who herself is a sister to the Listed winner Ain’tnofallenstar and to winner Hammer Time while also being a half-sister to the Group 3 winner Bachman (All American).

Frankie Lor, trainer of Master Eight (Oamaru Force), said the previously unbeaten gelding was a victim of circumstances after being caught wide, while Hot King Prawn could not get clear running at a critical stage.

Joao Moreira extended his lead in the jockeys’ championship to 15 over Zac Purton after posting a quartet.

The Brazilian underlined the depth of talent at Tony Cruz’s disposal when The Golden Scenery (Deep Field) surged to victory in the Class 2 Able Friend Handicap (1400m), earning a High Achievement Bonus of HK$1 million in the process.

Known as Dominant King when trained in Australia by Steven O’Dea and Matthew Hoysted, The Golden Scenery claimed the bonus for winning at Class 2 level when rated at 80 or above and before turning five.

Moreira was again to the fore in tandem with Frankie Lor when Beauty Live, a son of Shamus Award (Snitzel), swept to victory in the Class 4 Helene Paragon Handicap (1400m). Lor posted his 40th win of the season when Tavistock (Montjeu) gelding Ready To Win prevailed in the Class 3 Aerovelocity Handicap (1200m) for Derek Leung.

Determined to make the most of opportunities before starting a six-meeting suspension next month, Moreira drove John Size’s Pins Prince (Pins) along the fence to snare the Class 4 Peniaphobia Handicap (1200m) before guiding Superbella (Passing Glance) to victory in the Class 3 Seasons Bloom Handicap (2000m) for Frankie Lor, who had a treble on the day.

Addressing his ride on Zone D at Happy Valley on Wednesday night, Moreira said: “It’s a mistake I have done and there is a price to pay and I will pay with my head down and nothing I could say but just (to) apologise to all those people involved because it is a mistake – a genuine mistake.

“Fortunately, that didn’t get into my mind and apparently I’m still riding well.”

Ruan Maia dictated from the outset aboard Kowloon East Star (Zoustar) in the opening race of the programme – the Class 4 D B Pin Handicap (1000m) – providing Jimmy Ting with his 20th victory of the term.

Ricky Yiu’s Darci Joy (Darci Brahma) posted his third win from his past five starts when he arrived with perfect timing for Matthew Chadwick in the Class 4 Giant Treasure Handicap (1800m).

Navas Two (Excelebration) continued his ascendant progress with a third successive win for Richard Gibson as Maia completed a double by winning the Class 3 Beat The Clock Handicap (1400m).

Aiming to extend his unbeaten sequence to 17 – the champion’s win streak ended after a second-place finish in the afternoon’s feature – his first defeat in nearly 900 days, leaving Silent Witness (El Moxie) alone as the sole record-holder for consecutive wins in Hong Kong.

Given a supreme ride by Zac Purton, Waikuku lifted for his second Stewards’ Cup success after prevailing in 2020, giving trainer John Size a seventh win in the race.

“I was really happy with the way the race was run, I was in a lovely rhythm and I knew he was going to give me a kick but with Golden Sixty in the race, you’re never home until you pass the post.”

“He’s run many horses down the last few years, he’s a champion and obviously the race wasn’t run to suit him today,” Purton said of Golden Sixty.

Sent off as a 14/1 chance, Waikuku stepped away cleanly from gate four – settling behind Healthy Happy (Zoustar) who led for the most part, before taking over at around the 350-metre mark.

“He is (a good horse) on his day and he’s shown that and Golden Sixty has had to fight really hard to get past him a couple of times,” Purton said.

“The horse has trained up very well since the beginning of the season. He’s done everything correctly,” Size said. “He hasn’t had a moments’ problem and he’s kept on improving as every month has passed.”

“So, to get a nice run like that today, he was able to capitalise on it and kick on and win the race.”

Victory in today’s HK$12 million contest enhances Waikuku’s earnings to HK$43.80 million – he is now an eight-time winner in Hong Kong after arriving from Ireland where he was trained by John Oxx.

“It was easy to watch because he was more or less at the leader’s quarters, like trackwork. It looked good in the run. I was very comfortable with the way it was unfolding,” Size said.

The afternoon’s win was Zac Purton’s third in the Stewards’ Cup having previously succeeded with Fellowship (O’Reilly) (2010) and Beauty Generation (Road To Rock) (2019).

“I thought with the way the race was run, and the position we were in, if I could just get first run on him and have him (Golden Sixty) try and run me down again, that was what I was thinking, and fortunately today, we were able to hold on,” Purton said.

Purton and Size combined this afternoon for their first Group 1 in tandem since Ivictory’s (Mossman) triumph in the 2018 Chairman’s Sprint Prize (Gr 1, 1200m).

“He’s healthy and well, he’s been fine and if he gives me every indication he wants to go back to the races, he certainly will.

“Longevity has been his strong suit. He’s lasted all the way through from a very good preparation leading up to the Derby and he was a little bit unlucky the week before Derby – he had a problem and he ran second,” Size said.

Waikuku is the first foal out of Danehill Dancer (Danehill) mare London Plane, who herself is a sister to the Group-placed winner Al Waab.

Waikuku clocked 1m 34.82s for this afternoon’s win, while Russian Emperor (Galileo) rolled into third with More Than This (Dutch Art) behind him in fourth.

Size celebrated a double on the card as Pins Prince (Pins) scored in a thrilling Class 4 Peniaphobia Handicap (1200m) under Joao Moreira.

Brave in defeat, two options next

Golden Sixty was nothing short of courageous this afternoon – clocking a slick 21.95s for his final 400 metres of the race – a herculean performance, especially from the tail of the field.

Boasting a 16-win streak – as part of his glittering career – Golden Sixty lost no admirers today in defeat – his first since July, 2019 as he scrambled to catch Waikuku.

But now, it’s onwards and upwards for the brilliant son of Medaglia d’Oro (El Prado) who will next be tasked with either the Queen’s Silver Jubilee Cup (Gr 1, 1400m) or defending his crown in the Citi Hong Kong Gold Cup (Gr 1, 2000m) on Sunday, February 20 at Sha Tin.

“The horse is ok – he appears to have pulled up well,” trainer Francis Lui said. “It was just the draw. The way the race was run, he needed to be closer but, from the inside, it wasn’t possible today.”

The win was Ho’s second at the top-level this season after savouring the Hong Kong Mile (Gr 1, 1600m) last month with Golden Sixty.