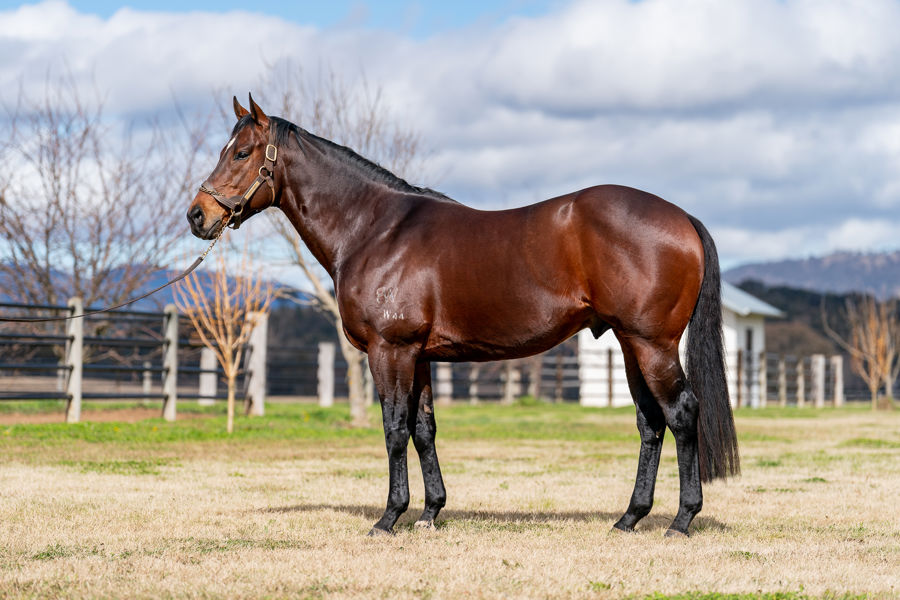 Some stallions’ careers are more linear than others.

I Am Invincible (Invincible Spirit) retired having won one Group race, the D.C McKay Stakes (Gr 3, 1100m) at Morphettville, and stood for an initial $11,000 (all fees include GST). As the success started coming – he had 22 stakes winners from his first three crops – his service fee at Yarraman Park began its climb to its current mark, franked by his just-sealed first general sires title, of $247,500.

Super One, from ‘Vinnie’s’ second crop, also retired having won one Group race, – the DC McKay Stakes, no less – and also initially stood for $11,000, at Newgate Farm.

He didn’t quite hit the ground running like his famous father, his first two seasons in action yielding 46 winners from 124 runners, and none in black type. Towards the end of the second of those seasons he was sold to Hong Kong interests – the All Winners breeding concern, based in Queensland and backed by well-known Hong Kong owner, K.F. (Keung Fai) Cheng.

Despite the relative lack of success, Super One also had a service fee rise when moved to Newhaven Park for the 2021 season, to $16,500. After one year there he’s now back in the Hunter Valley as the sole stallion at Lincoln Farm.

The fee remains $16,500, even though Super One, now with three crops having done his bidding, remains yet to sire a stakes winner.

That last detail, at least, looks sure to change, judging by the emergence of the Edinglassie Stud-bred Alpha One. Team (Peter and Paul) Snowden’s brilliant colt has won the last three of his six starts, the latest by almost four lengths, after leading throughout in the 955m 2YO males’ dash at Moonee Valley on Saturday. The now three-year-old is set to try to bring his sire’s first Black Type as a stallion in the Vain Stakes (Gr 3, 1100m) at Caulfield on Saturday week.

It was something of a red-letter weekend for Super One, in fact. His five-year-old mare, One Aye, from the Sapphire Coast stable of Barbara Joseph, Paul and Matt Jones, took out the Forbes Cup (1600m) and is now eligible to chase far greater riches in the $2 million The Big Dance (1600m), Randwick’s new Melbourne Cup Day event.

And where riches are concerned, Wagga-trained Another One helped himself to $400,000 from NSW’s seemingly ever-growing purses by taking the Country Championships at Randwick in April. That shot his career haul past $800,000, and helped his third-season sire to a best-yet general standings finish of 68th, with 66 winners from 136 starters.

Perhaps also reflecting the sire’s progress to date, however, Super One also had a winner on Saturday at Corfield. That’s not a misspelling of an esteemed place in Melbourne, but in fact a speck (of much dust) in outback Queensland, north-west of Longreach, where Liz’ Delight scored over 800m three hours after Alpha Won streaked home. (With an official population of 183, it’s pretty close to being as-Australian-as-you-can-get, in fact, it’s a bush stone’s throw – ‘bout a hundred Ks – from the billabong where the sheep-stealing shenanigans from Waltzing Matilda supposedly happened.)

But, in keeping with a non-linear story, we digress.

The main point being that after several years of trying and three different homes, those behind Super One are hoping he may now be set to serve better justice to his reputation as one of the fastest sons of I Am Invincible at stud.

Denys Chan, CEO of All Winners, says he’s hoping Super One will cover more than 90 mares at Lincoln Farm this season.

“We’re absolutely happy. He’s on fire at the moment, and fingers crossed, Alpha One will win some black type,” Chan told It’s In The Blood.

“The problem with the stallion in his first two seasons, I think, is he had too many European mares. I think that’s not suitable. Ideally, he wants the speedy type, so you get speed on speed.”

Chan is also adamant Super One’s fee hike, however unorthodox, was justified, given “he sires ideal types for Hong Kong”.

He had shone elsewhere in Asia himself. A $190,000 yearling buy for Michael Freedman and Michael Wallace Bloodstock at the Magic Millions Gold Coast Yearling Sale in 2014, Super One – the first foal of Tale Of The Cat (Storm Cat) mare Tails Wins – had a brief, eight-start career under various combinations of Freedman brothers, which began Singapore. He won his first four starts there, the last couple in two-year-old Listed class, and was considered good enough to return to Australia. He finished well back in Flemington’s Coolmore Stud Stakes (Gr 1, 1200m) in 2015, returned from a spell to win the McKay Stakes, before an unplaced run in the Goodwood (Gr 1, 1200m) at his last start.

Chan had bought Super One first-cropper Gluck Racer for $70,000 from the Adelaide Magic Millions sale of 2019, for his Hong Kong bloodstock agency Golden River Investments, and would see him win three of his first six starts in the territory last year.

“I know these Hong Kong-type horses, and I knew Gluck Racer would run well in Hong Kong,” Chan says. So, I thought he would be a good sire for the Hong Kong market, and thought he deserves a fee of more than $11,000.

“Super One raced well in Singapore, and as a sire, he’s had winners there [two from three runners] and Macau [one from one]. I think his offspring are ideal for Asian racing, on those hard, dry surfaces.”

Alpha One, who before Saturday had won at Newcastle and Hawkesbury, began life at Edinglassie, bred by the farm’s Mick Talty and wife Michelle Wright, from a line of their mares.

Cash First never raced due to a leg issue. Cash For Comment won one of two in the bush, and Announce was unraced. Despite just two starts between them, the trio promised substantial breeding impact.

Announce was the dam of five winners from five runners including Listen Here (Elusive Quality), who won an Adelaide Listed event, but achieved greater fame as the dam of three Edinglassie-breds: Caulfield Guineas-winner Shooting To Win (Northern Meteor), Brisbane Listed-winner Zaniah (Zoustar), and a G2-winning sprinter, now passing genes on to some handy offspring himself, Deep Field (Northern Meteor).

And while Cash For Comment couldn’t quite match her mum as she threw three winners from six runners, one of them was Cash First’s full sister High Achiever (Pins). She became the dam of triple stakes-winner She’s So High, a daughter of I Am Invincible.

“Given that Cash First’s full sister produced She’s So High by Vinnie, and with the fact we couldn’t afford to go to Vinnie, we thought we’d try his son in Super One instead,” Talty says. “He was a lovely foal from the get-go. The mare is a bit hard to get in foal, but when she does have one, they’re usually quite nice.”

So nice, in fact, that when the future Alpha One was offered from Magic Millions Gold Coast Book 2 last year, Talty was hoping to retain a share if his friend, trainer Rod Northam, succeeded in acting on Talty’s recommendation.

Instead, with Northam reaching his limit at $50,000, Chan’s Golden River Investments nabbed him with one more $5,000 bid, later on-selling to K.F. Cheng at the Inglis Ready2Race Sale, nine months on, for a sale-topping $400,000.

Still a colt, Alpha One may one day have a chance to pass on strains of his rich pedigree to his own progeny.

And if the quality seems richer the deeper you go, it’s because Theme Song was a daughter of the famed Cotehele House (My Swanee) – dam of outstanding gallopers and sires and Danehill full brothers Commands and Danewin, and a rarity in that she’s a horse out of Eight Carat (Pieces Of Eight) who never won a Group 1. Five offspring did, chief among them Octagonal (Danehill).

Alpha One is only the fourth named foal – and so far the latest offspring – of the 16-year-old Cash First (Exceed And Excel), who’s had more misses than hits since starting breeding in 2010.

But Talty is excited about the foal she’s about to drop – from the second crop of Cosmic Force (Deep Field), for a very promising repetition of Eight Carat. The fact Cosmic Force has a double-up of that great Blue Hen (Abernant), means the coming foal will have her, at 7Sx5Sx6D, in three appearances in its pedigree. Even Verry Elleegant (Zed) can only boast two.