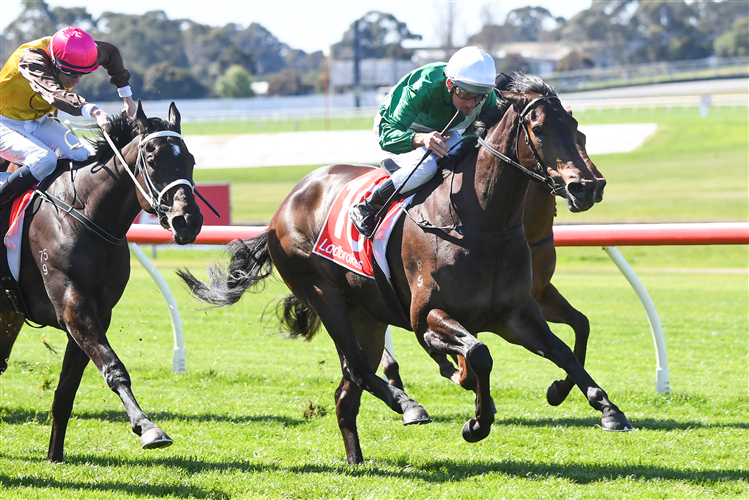 3 f I Am Invincible – Roudha by Galileo

Peter and Paul Snowden unleashed another promising filly this week as Tajneed (I Am Invincible) put a recent Canterbury trial win to good use when scoring a promising debut success in a maiden plate at Sandown on Wednesday.

An Emirates Park homebred, the three-year-old settled well in seventh position under Damien Oliver throughout the early stages of the 1300-metre contest before improving rounding the home turn and running on strongly to take the lead inside the final 100 metres, fighting back gamely to record a neck victory over Deep Impact (Sunday Silence) filly As Time Goes By.

The Trent Busuttin and Natalie Young-trained Foxy Cleopatra (American Pharoah) was a head further back in third.

“The message I got from the Snowden stable was to try and be a little bit conservative on her, give her a chance to finish the race off, particularly over 1300 metres first-up,” Oliver said post-race.

“I was a little wide, but I had cover for the first half of the race, it wasn’t too bad, and then peeled off and then took off quite early in the straight but managed to fight them off.

“She’s a lovely style of filly, she’s got a bit of length and scope about her, particularly for a daughter of I Am Invincible, they usually are speed type of horses.”

Tajneed is the first foal out of the unraced Galileo (Sadler’s Wells) mare Roudha, herself a daughter of dual Group 1 winner Melito (Redoute’s Choice) and from the family of Group 3 winner-turned-stallion Pariah (Redoute’s Choice).

Roudha was a 500,000gns purchase by Emirates Park from Book 1 of the 2016 Tattersalls October Yearling Sale.

Her two-year-old colt by I Am Invincible (Invincible Spirit) was a $500,000 buy for Ciaron Maher at the Magic Millions Gold Coast Yearling Sale earlier this year.

Last season’s champion sire I Am Invincible stands at Yarraman Park where he commands a fee of $247,500 (inc GST).