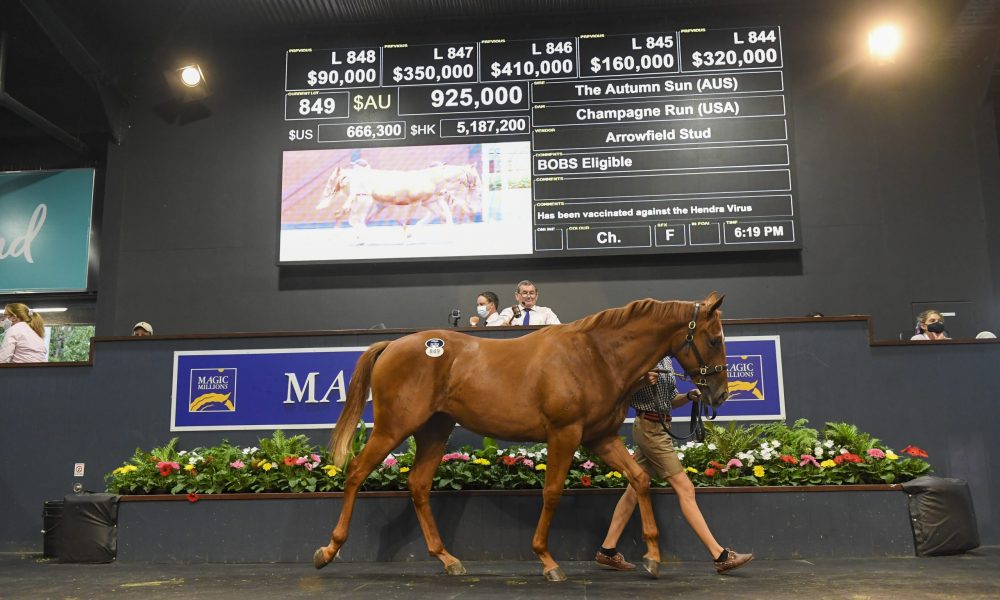 The Autumn Sun (Redoute’s Choice) saved his best until the second-last lot of Book 1 at the Magic Millions Gold Coast Yearling Sale yesterday, when Justin Bahen and trainer Kris Lees fought off fierce competition to purchase a colt by Arrowfield’s young stallion for $950,000 – the highest price paid for a yearling by any first season sire through the whole week.

Catalogued as Lot 932 and offered by Kitchwin Hills, the colt is out of New Zealand Group 3 winner Duchess Kate (Savabeel), herself a sister to dual Group 2 scorer Saavoya.

Yearlings from the first crop of the five-time Group 1 winner have been popular all week at the Magic Millions Sale, which led to him finishing the sale as the leading first-season sire by both average and gross, selling 28 youngsters for an aggregate of $10,750,000 at an average of $383,929.

Meanwhile, Coolmore’s Triple Crown-winning shuttler Justify (Scat Daddy) finished second of the first season sires by average, having sold 23 yearlings at an average of $300,000 for a total receipts of $6,900,000. His shuttling barnmate Saxon Warrior (Deep Impact) finished fourth in the leading sires by average (with three or more lots sold), having sold four yearlings for a gross of $1,060,000 at an average of $265,000.

Prior to yesterday evening, The Autumn Sun’s best result had been two colts which sold for $550,000 a piece, but that figure was smashed early on in the final Book 1 session when Victorian trainer Matt Laurie purchased a filly by the son of Redoute’s Choice (Danehill) for $925,000.

Offered by Arrowfield Stud and catalogued as Lot 849, the filly is the seventh foal out of US winner Champagne Run (More Than Ready), herself a half-sister to US Grade 2 winner Friesan Fire (A.P. Indy) and Sandown Guineas (Gr 2, 1600m) winner Villermont (All Too Hard). The filly’s second dam is the Coolmore Classic (Gr 1, 1500m) winner Bollinger (Dehere), who was trained by Gai Waterhouse.

Champagne Run is already the dam of last-start three-year-old Red Roses Stakes (Gr 3, 1100m) winner Flying Evelyn (Not A Single Doubt), the Group 3-placed Cristal Eyes (All Too Hard) and two other winners.

“He was a superstar racehorse and no doubt he could have gone on, but they pulled the pin (to go to stud), and he’s off to a great start with this filly,” Laurie said.

“She was probably more forward than you would expect, maybe, from The Autumn Sun. She was very athletic, bouncy and light on her feet and she’s from a very good family … the page is littered with black type.”

Laurie ended up with six horses from the Book 1 sale, also taking home a $525,000 filly by The Autumn Sun out of Group 3 winner Girl In Flight (Commands), who was purchased in conjunction with agent Justin Bahen on day one, and a $400,000 colt by another first season sire in Darley shuttler Harry Angel (Dark Angel), bought late on Friday.

Widden Stud’s young sire Trapeze Artist (Snitzel) also enjoyed his best result in a sales’ ring last night when trainer Phillip Stokes went to $850,000 for a colt by the son of Snitzel (Redoute’s Choice), whose previous best was $650,000.

The colt was offered as Lot 865 by Mill Park Stud and he is the third foal out of a Cocoa Doll, a three-time winning daughter of More Than Ready (Southern Halo). Cocoa Doll herself is a daughter of the stakes-placed mare Elusive Wonder (Elusive Quality), making her a half-sister Group 2-winning filly and 2020 Magic Millions 2YO Classic (RL, 1200m) winner Away Game (Snitzel) and Listed scorer Modern Wonder (Snitzel).

Meanwhile, Grunt (O’Reilly) – who stands at Yulong Stud in Victoria – was also provided with his best result for the week when Astute Bloodstock teamed up with Ciaron Maher to snare a filly by the dual Group 1-winning stallion for $300,000.

Offered by Yulong and catalogued as Lot 860, the filly is the first foal out of Listed-placed mare Cinematic (Dane Shadow), herself a daughter of Listed winner Snapshots (Success Express).

Grunt had six yearlings sell throughout the week, with the youngsters making an aggregate of $1,110,000 and recorded an average of $185,000.