“The future belongs to those who plan for it” 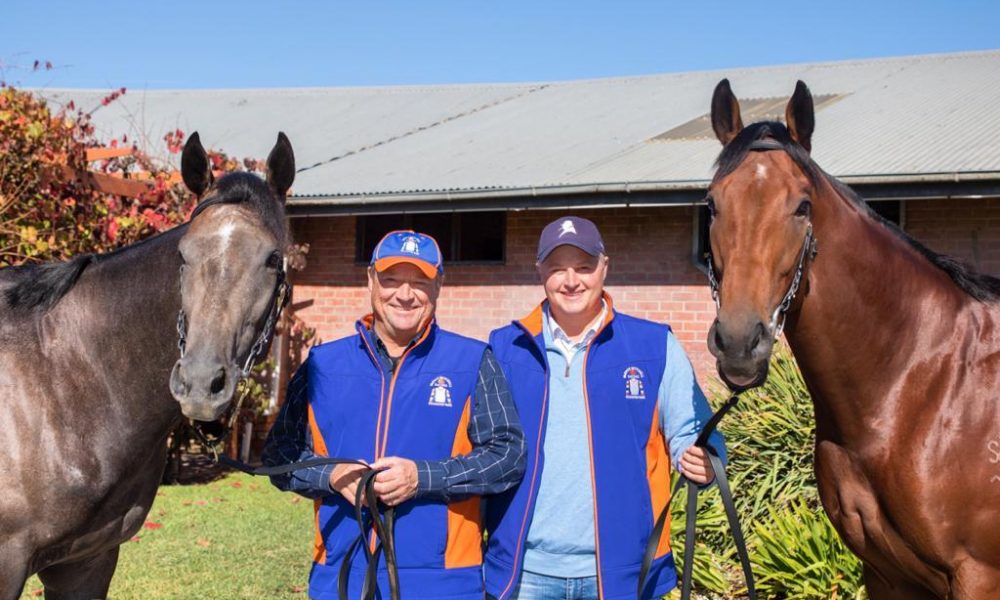 That birthday milestone would spell imminent retirement in most professions. Not if you are a racehorse trainer.

McEvoy-Mitchell Racing remains very much in the now and with an eye to the future which he explained, appropriately enough, from the hut atop the famed uphill gallop carved into the Angaston hillside more than 50 years ago by Colin Hayes, whose mantra was “the future belongs to those who plan for it”.

Then it was Lindsay Park, a training operation variously overseen by Colin and his sons David and Peter, and also by McEvoy himself, soon after David first ventured to Hong Kong.

Now it’s Kildalton Park – named after the region in Scotland from which his family originated. Kildalton is a parish on the Isle of Islay which is home to many of the world’s most renowned single malt whiskies.

Now it’s in the hands of McEvoy, as proprietor rather than tenant or employee, with his wife Jo and son and training partner Calvin, whose enthusiasm has almost certainly triggered a sense of reinvigoration which has been apparent with other stables – Mick Price taking on Michael Kent junior (who furthered his skills at Newmarket at the same time as Calvin); Robbie Griffiths partnering with Mathew De Kock and another father and son combine Anthony and Sam Freedman.

Last season, during which Calvin joined his father as co-trainer, the stable finished eighth on the Australia wide premiership, with fewer runners than any of the seven stables above them, and with a strike rate of 20.7 per cent, the best of any in the top ten.

This season they challenge again for a top ten place Australia wide and have a clear lead in the South Australian premiership, which they won last year with 99 winners at a remarkable 25.3 per cent strike rate.

Kildalton Park, complemented by Kildalton Farm on the Murray River and state-of-the-art stabling for 100 horses at Ballarat, has been central to the McEvoy and Wayne Mitchell partnership now in its eleventh year. McEvoy met Mitchell, managing director of Mitchell Water – one of Australia’s largest dedicated pipeline contractors – entirely by chance at the pub in nearby Tanunda.

“I don’t often go to the pub these days but it was a good thing I did that day,” said McEvoy. Inference being he did frequent them more often, at a time when he concedes he was “a bit of wild lad” which was perhaps a consequence of growing up with five brothers – Peter, Phillip (father of Kerrin), Geoffrey, Bill and Darren.

If it were ever true that he once preferred a “fight to a feed” then that’s been completely flipped on its head with his passion – aside from horses – now being cooking and I can attest, after a Kildalton stopover, he’s pretty good at it notwithstanding occasional assistance from Jo. What man, when cooking, hasn’t had to ask “how much is 300 grams?”.

“Wayne raced a few horses and he recognised me. We struck up a conversation and that eventually led to us getting together. We started with just two horses in 2010 and, overall, I think we’ve managed to do pretty well,” he said.

It began with securing, in 2010, the integral training property of the old Lindsay Park which was split and sold and is now variously home to McEvoy’s operation; Peter Hayes’ son Sam’s Cornerstone Stud and Pan Sutong’s Goldin Farms.

There’s not that many days in the past 44 years that McEvoy has not spent on the property, having arrived in 1977 to be apprenticed to Coin Hayes and he now sees it as more natural and comfortable, rather than awkward, that he’s calling the shots from C S’s hut which is still adorned with photos of the Hayes family.

While he is focused on upgrades to the Angaston training facility, further development of Ballarat and the opportunities which will present in partnership with Calvin; a little history is not inappropriate.

His grandfather arrived from Scotland to farm on the West Coast near Ceduna, while his father Chas also farmed nearer to Streaky Bay. “Dad died in 2013 but mum (Connie) is still going strong, at 92, in Streaky (Bay). Dad was a rough rider and horses were a big part of our lives from a very early age.

“With six boys things could get pretty willing but old Chas’s rules were simple. There was a boxing ring, marked with twine, on the verandah and if ever there was a dispute, he’d just say “go outside and sort it out”,” he said. That must have worked as McEvoy says he and his brothers are “all close”.

McEvoy left home at just 12. He followed his elder brother Phillip to Streaky Bay, about 50 kilometres from the family farm, to ride work for trainer Bill Holland.

“All I ever wanted to be was a jockey. Phil and I lived in a caravan at the stables. I still went to school but I rode work in the mornings and worked in the stables in the afternoons,” he said. He would eventually begin race riding and rode 30 winners in the district before the call-up to Lindsay Park.

“Colin (Hayes) was looking for an apprentice and Kevin Sattler, who was the leading racing writer and who had Colin’s ear, said he should look at me and I got the job on loan from Bill Holland. There were six apprentices here then and it was very competitive but I managed to get to the top of the pecking order and finished second to Jim Courtney in the premiership,” he said.

McEvoy rode 70 winners in 1977 and 1978 but, with his weight increasing, had his last ride in 1979. “I headed home and then went shearing. I was 18 and wild and in wild towns like Alice Springs,” he said. But the urge was strong to return to the horses and he re-joined the Lindsay Park fold, initially with Peter Hayes, in 1981.

When Peter was killed in a plane crash in March 2001, and with David in Hong Kong, he took the reins at Lindsay Park and was champion trainer in Victoria in 2002-2003 – a distinction which Colin, Peter and David had previously claimed. He also prepared Fields Of Omagh to win the 2003 Cox Plate.

He maintains great respect and affection for the Hayes family and the direct link may well have continued at the family’s “new” operation at Euroa but for his daughter Eliza’s feistiness. “I had a little bit to do with the set-up at Euroa and we were planning to move but Eliza flatly refused to budge and we decided to stay put,” he said.

That, as it turns out, has been for the better. “We’re in a very good position with Calvin coming through and really wanting to do it. Ballarat is a real asset and still in its infancy. It was two years in the planning but has only been in operation for four months,” he said.

He concedes his earlier 2013 expansion to Hawkesbury, and with boxes at Randwick, was a mistake. “There was several reasons. Potential clients in Sydney wanted their horses in Sydney and there was a very limited pool of potential owners in the Hawkesbury region. The boxes at Randwick were run down. Calvin was a little too young then to have a key role and I was running myself ragged. We’re much better set up now with Ballarat and Angaston,” he said.

The Angaston gallop now features a Pro-Ride surface as well as the grass track. “And we’re so close to the horses here without any distractions. You can see their actions, hear their breathing,” said the trainer whose operation prides itself on the fact that no management phase, from breaking and pre-training, is outsourced.

McEvoy currently has 238 horses on the books but is looking to further expand. “Closer to 300 is about right for our operation. You’ve got to keep refreshing and move on those horses who are not going to cut it. We planned to buy about 40 yearlings this year but only have about 30 at this stage, the market’s been strong,” he said.

He does believe South Australian racing is on the rise. “There’s a better feel here now than there’s been for quite some time. Nick Redin is doing a good job as CEO here (Thoroughbred Racing South Australia) and the rebranded owners and breeders bonus scheme Racing Rewards has added some impetus,” he said.