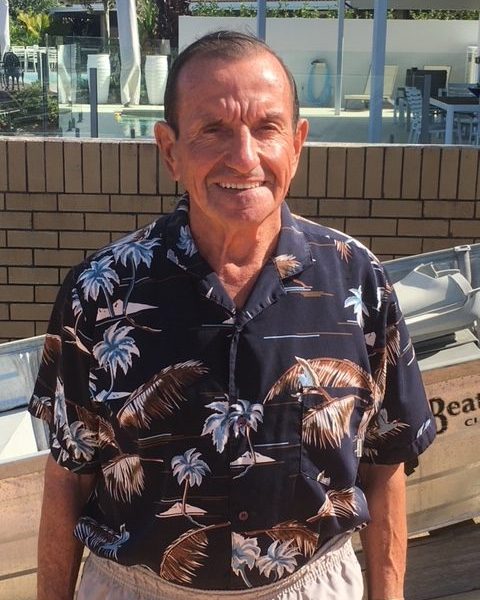 Paul Jarman was no stranger to causing an upset. He won his second Victoria Derby on Big Print, a 20-1 chance who – in 1979 – defied two champions in Kingston Town and Roy Higgins.

Big Print, appropriately by a stallion named My Friend Paul (Pretendre), won by a short head from the famed son of Bletchingly (Biscay) on whom the great Higgins hadn’t found the clearest path. Many claimed the champ was unlucky. Jarman claimed the spoils.

He won the 1986 Ascot Vale Stakes (now the Group 1 Coolmore Stud Stakes) on Zephyr Cross (Zephyr Zing) whose official starting price was a whopping 140-1 after 200-1 had been bet. Again he upstaged a champion with Bounding Away (Biscay) a half head astern.

And for good measure, he claimed an international Group 1 success in the 1973 Irish St Leger on Conor Pass (Tiepolo) who was no longshot but did tip over the favourite Sunyboy (Mourne). That came just two years after his Melbourne colleague Alan Simpson had won the race.

Jarman, 73 and living on the Gold Coast, says the memories of his riding exploits are not that vivid. “It was a long time ago,” he said. However, his recollections proved to be unerringly accurate.

The 1979 Victoria Derby on Big Print, trained by Andy White, is arguably his best remembered win. “Not sure I was lucky to win but I do know that Kingston Town never won at Flemington and I’m glad he didn’t. Higgins rode Kingston Town after Malcolm Johnston chose Mighty Kingdom who’d won the Caulfield Cup. He was favourite, not Kingston Town. Kingston Town charged late but we held on,” he said.

Kingston Town won 30 races including three Cox Plates but was unsuccessful in four starts at Flemington.

Jarman was champion apprentice in Victoria in 1965, 1966 and 1967 and, at just 19, he won the Derby on the Ken Hilton-trained Savoy in the last of those three title-winning years. “Yes, I was still an apprentice when I won that Derby but I wasn’t the first,” he said.

That distinction, according to research from Danny Power and Malcolm McLaren, likely sits with Phar Lap’s jockey Jim Pike who won on Beverage (Maltster) – a horse who was blind in one eye –  in 1910. Pike was 18 – as was Lester Piggott when he won his first Epsom Derby on 33-1 chance Never Say Die (Nasrullah) in 1954.

Then, in 1970, not long after coming out of his time he “pinched” the 1970 Cox Plate on the longshot Abdul who was trained by Geoff Murphy and won by three lengths. “I took off just past the school and he kept running,” Jarman said.

“Ridden a heady race by Paul Jarman, Abdul was taken to the front 500 metres from home and shot clear while other jockeys were waiting for breaks which were not forthcoming,” Rhett Kirkwood and Brian Meldrum wrote in the “Valley of Kings – a history of the W.S. Cox Plate”.

In 1973, he took the chance to venture to Ireland to ride for Australian-born Irish trainer Kevin Prendergast who favoured antipodean jockeys. “Laurie Johnson had been riding for Kevin but he decided to stay in Singapore in 1973 and apparently I was recommended. I jumped at it. I’d just been married and thought this would be a good honeymoon and I’d get paid for it.

“It was great. I rode 50 or 60 winners in each of my two seasons there and I loved the extended daylight. I’d go fly-fishing after the races,” said Jarman, who remains keen on fishing and crabbing.

As was the case with Abdul, he made an early and decisive move on Conor Pass to win the St Leger in his first year with Pendergast, who trained the three-year-old. “We kicked away at the three furlongs (600 metres) and held on. He probably wasn’t a real stayer but like many three-year-olds he could do it against his own age,” he said.

An ambitious trek to America for the Washington International was undertaken with Conor Pass later that year. “I headed over there but the horse didn’t travel well, picked up an infection and couldn’t run. As it turned out, another Aussie Billy Pyers won the race that year on the great mare Dahlia.

“I remember all the international visitors were out for dinner that night and, at one stage, Billy comes bursting through the restaurant sitting on a tricycle and singing “if you ever go across the sea to Ireland…,” he said.

Jarman relished his time abroad but was equally pleased to head home after two years. “It was a great experience to ride in Ireland and England although I didn’t have much luck in England. Some of the tracks were amazing but, after a while, I was happy to get home to ride on some nice, flat tracks.

“Over there, if I was heading to track I didn’t know I’d look for the side of a mountain and think to myself ‘that’s where the track will be’,” he said.

Jarman was perhaps not your stereotypical jockey and happily retired early, at just 39, to emulate his father Jim in taking out a builders’ licence – but not before that memorable win on 140-1 chance Zephyr Cross at Flemington in 1986.

Zephyr Cross was trained by Alan Yeomans who was left a paraplegic after an infamous fall at Pakenham in January 1960. Yeomans, who’d won the 1958 Caulfield Cup on Sir Blink (Blue Coral), would turn to swimming (and wheelchair sports) and won three medals in swimming at the 1962 Commonwealth Paraplegic Games in Perth. In 1967, he became the first licensed paraplegic horse trainer in Australia.

Simpson, Jarman’s Irish St Leger winning predecessor, escaped serious injury in that three-horse fall. Simpson had served his apprenticeship at Mentone while Jarman had done likewise at neighbouring Epsom, indentured to Jack Besanko and it was one of Besanko’s owners, Lee McKeen, who’d organised Simpson’s employment in Ireland.

What price that two jockeys from adjoining southern Melbourne training centres would each win the St Leger, in Ireland, two years apart?

Jarman estimates he rode 1500 winners. Alas, the Melbourne Cup was not among them but his resume was pretty darn good for a man who walked away from the profession sooner than most with his record and profile.

He was beaten just two lengths into fourth place in the 1972 Cup won by Piping Lane (Lanesborough). “I rode Double Irish who’d won the Moonee Valley Cup, beating Piping Lane who finished third but he was too good at Flemington. Double Irish was just pipped for third by the great Gunsynd,” he said.

Jarman is married to Lyn, daughter of trainer Bill Warke and the girl he took on that Irish honeymoon almost 50 years ago. They have two children; Ben and Tammy and six grandchildren; Emily, Mackenzie, Stephanie, Tyrell, Zayden and Mariah.

He stays in touch with former riding colleagues including Stan Aitken and Pat Trotter and continues to follow the races. “I still try to back a winner but I’m not much good at it. I like to catch a fish or a crab, that’s still with me, but I’m not much playing as much golf as I used to because I keep getting worse at it,” he said.