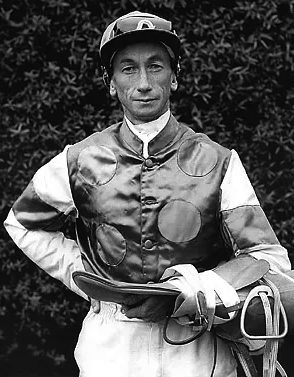 In Australia, Moore is credited with a record 119 Group 1 winners. He was champion jockey in Sydney ten times. Neither bettered.

In Hong Kong, he was champion trainer 11 times – a tally only matched by John Size.

In Europe, he rode 27 Group 1 winners (allowing for races which now have that status) and they included the (Epsom) Derby and the Prix de l’Arc de Triomphe.

The success of sons John and Gary have ensured his name is well remembered. John, the winning-most trainer in Hong Kong; and Gary, champion jockey in France and Hong Kong, champion trainer in Macau and also an Arc winner.

Plus there is the ongoing prominence of Yarraman Park Stud – the property sold by Moore to the Mitchell family.

Good heavens, he was even named the BBC’s Overseas Sports Personality of the Year in 1967 – a distinction he shares with Australians Herb Elliott, Ron Clarke, Rod Laver, Greg Norman, Mel Meninga and Shane Warne.

His span of 84 years saw made an Officer of the Order of the British Empire; inducted into the Racing and Sport Australia Halls of Fame; honoured with the medal in his name presented to the leading jockey in Sydney; awarded the Australian Sports Medal for outstanding commitment to thoroughbred racing; and be included in Australia Post stamps launched as part of its Australian Legends series.

And he was just as widely acclaimed internationally as he was in Australia despite telling the press, in 1948, that he had no interest in riding other than in Australia.

However, he was friends with American Hall of Fame jockey Johnny Longden (who, incidentally, was born in Yorkshire) and that prompted a holiday in 1948 with Moore citing he “just wanted to see racing” there.

Just two years later, he returned to the United States to begin what would become an international career.

“Moore is the first Australian jockey to have been offered a retainer from an American owner or trainer. His predecessors, W. (Billy) Elliot and E. (Edgar) Britt did not have retainers in the USA,” it was reported at the time. Elliott, of course, partnered Phar Lap in the 1932 Agua Caliente Handicap in Mexico.

Moore’s wins in America included the rich San Diego Handicap on Manyunk and it was reported that the crowd gave Moore a great reception.

Moore told the Australian racing media, on his return, that he’d had “moving pictures taken of many of the races in which he rode and he intended to show the films to his friends as they gave a splendid example of American racing”.

“Riding in America was easy,” Moore said at the time, “after riding here because of the small fields in races there. Contrary to general opinion, there was not half the bustle in American races. American jockeys did not go to the running rail as riders did in Australia.”

He returned to Australia and won the first of his ten Sydney jockeys’ premierships in 1957. This premiership had earlier been won five times by another of our “incomparables”, Neville Sellwood.

Moore made a cameo at the York Ebor meeting that year (1957) but had just the two rides. The following year he won the Prix Robert Papin in France before winning 17 Group 1s in France, England and Ireland in 1959 and 1960.

His first winner in England was Petite Etoile in the Free Handicap at Newmarket on April 15, 1959, shortly before he claimed the 2000 Guineas on Taboun – becoming one of eleven Australian jockeys to win either the 2000 or 1000 Guineas in England.

However, it was in France, where he rode for Alec Head and Prince Aly Khan (at one time married to actress Rita Hayworth), that he truly excelled with numerous major races wins including the 1959 Prix de l’Arc de Triomphe on Saint Crespin and the 1960 Prix du Jockey Club (Derby) on Charlottesville.

Saint Crespin’s controversial win was reported, at the time, as follows:

“Saint Crespin won a sensational race for the £34,457 Prix de I’Arc de Triomphe here today. But for thirty-flve minutes after a breathtaking photo-finish the destination of this glittering prize hung in the balance. First the judge spent ten minutes studying the picture before announcing Saint Crespin had dead-heated with Midnight Sun.

Moore was based in Sydney for most of the 1960s but returned to England for a time in 1967 to ride for trainer Noel Murless and they combined to win the first three 1967 British Classics –  the 1000 Guineas with Fleet plus the 2000 Guineas and Derby with Royal Palace, who was denied the Horse of the Year crown by stablemate Busted on whom Moore won the King George VI and Queen Elizabeth Stakes.

“When George Moore arrived in this country from Australia earlier in the season,” one confident scribe reported on the eve of the Derby, “ to ride as first jockey to Noel Murless he said he had three ambitions—to ride a winner for the Queen, to ride the winner of the Derby and to ride his 2,000th winner—all of which should be fulfilled this season. His first ambition has already been realised. The Queen’s Hopeful Venture, Moore’s first ride for Murless, was successful at Newmarket in April. The third looks a mere formality, for Moore needs only six more to top the 2,000 mark. The second—and most important—should be fulfilled today when he partners Mr. Jim Joel’s Royal Palace in the Derby.”

Moore was the subject of threats on more than one occasion. The first incident was in England in that triumphant year when he had a number of threatening phone calls and his car was vandalised.

Then, in 1968, it was reported that Moore and three “millionaire racehorse owners” have been threatened with death unless they pay huge sums of money as protection.

“Police confirmed that letters containing threats,” the Sydney press reported, “had been passed to them but would not disclose by whom they had been sent. Moore’s wife Iris said she knew nothing about the threats and added that her husband was out playing a round of golf. Moore, who had a highly successful season in Britain last year, is leading the Sydney jockey championship.”

In 1972, Moore gave up his brief training career in France after Nelson Bunker Hunt took his string of racehorses from Moore’s care. That prompted the move to Hong Kong where he was accompanied by son Gary, who’d ridden with great aplomb in Europe, notching 12 Group 1 winners. The rest is history with the two arguably launching Hong Kong as the international racing mecca it has now become.

Max Presnell, after Moore’s death, wrote: “Longevity with skill at the highest level is a major attribute, and Moore retired after the 1971 Victoria Derby, having notched his 2278th winner. At that stage he couldn’t raise the whip above shoulder height because of injury but his most vital attribute — his hands — still had their touch.

“Moore had a brilliant mind that triggered lightning-sharp reflexes to send the message through the reins to the horses — go faster, ease, accelerate, come back, drop the bit. Few, if any, had greater control over a mount; this, coupled with mental strength, made him the extreme competitor.

“The overall record of Moore is even more impressive considering he was outed for two and a half years in 1956 over the Flying East case. He signed the Stud Book return as the owner of the mare, which was actually owned by his wife Iris’ father. The plot thickened when Flying East scored at Hawkesbury, and Moore, who was handling another horse in the race, was accused of backing Flying East.”

HOOFNOTE: The following is the report, at the time in 1968, of the sale of Yarraman Park Stud.

“Moore’s friends said yesterday they were not surprised he was selling up, columnist Charles Greville wrote. His wife had never liked being “buried” in the country whether English or Australian country – and the farm was 290 miles from Sydney.

“Major Mitchell, who had known Moore for sometime, planned to emigrate with his wife and three sons, who were down for Eton. The eldest, 13-year-old Arthur, will now go to Geelong, where Prince Charles spent a term,” the columnist said.

At ANZ Bloodstock News, we understand Arthur Mitchell did follow Prince Charles to Geelong Grammar’s Timbertop on the basis it was the only Australian school anybody in England had heard about…but we are not sure how long he stayed!

“I have always wanted to buy a stud but have never been able to afford one before,” Major Mitchell is reported to have said at Deauville, France, where he “is staying aboard a yacht on a ‘nostalgic’ visit before going down under”. Major Mitchell had just sold his Norfolk estate for £407,000 ($872,000).