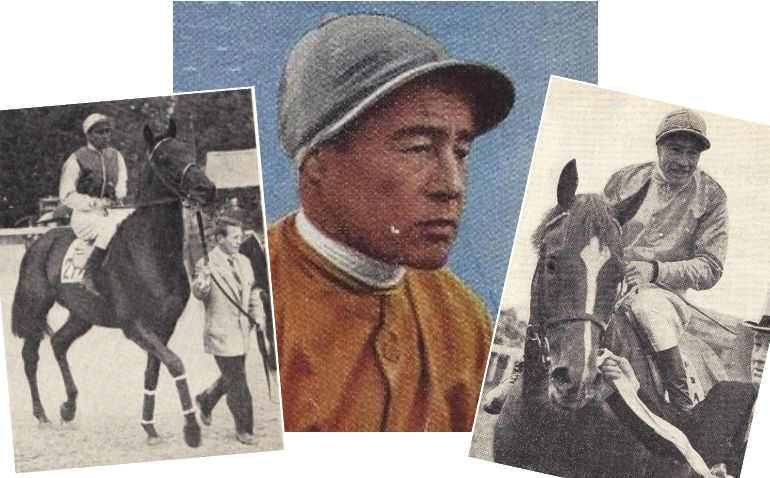 Johnstone rode 50 winners of races which now have Group 1 status in England, Ireland and France. That included 29 Classics.

No Australian jockey bettered those tallies. Not Scobie Brealsey nor Bill Williamson or Ron Hutchinson. He won the Derby three times and twice the Prix de l’Arc de Triomphe.

Legendary broadcaster Sir Peter O’Sullevan named Johnstone, along with his chief rival for the “greatest” mantle Breasley, among his 12 horse racing heroes.

”In the saddle he was a bobby dazzler, daring, crafty, noted for spotting an opening before his rivals and a masterly judge of pace,” Jack Pollard’s Australian Horse Racing says.

Historian Andrew Lemon described him as “a European celebrity”.

“Le Crocodile”, so named by the French as he would “come from behind and gobble up the field” and a nickname which he much preferred to “Togo” (after the Japanese admiral), had sufficient renown to be the subject of an extensive 1957 feature in the American-centric Sports Illustrated.

It’s also said he was known, in France, as “Le Diable a Cheval” – the devil on horseback.

Furthermore, some English newspapers had yet another moniker, dubbing him as “the Beau Brummel” of jockeys – as “he pays special attention to his dress” – while other reports have it that “Togo” was never really his nickname in the first place.

“His first winner was Grey Arrow, at Rosehill, and it laid the foundation for his nickname. As he whipped his horse past the winning post, someone in the crowd shouted: “What a tiger!” The name Tiger stuck, became shortened to Tige, and then corrupted to Togo,” wrote one journalist many years ago.

His death even prompted an obituary in the New York Times.

William McHale, in Sports Illustrated, wrote: “Johnstone piled up a quarter-century record of victories which fixed him as one of the greatest international jockeys of modern times. Before arriving in France in 1932, he had already won 600 races as champion jockey of Australia and India, and he added some 1400 more before his retirement. Among these are 30 “classics,” (sic) including three English Derbies.

“In a single year, 1948, he won the English, French and Irish Derbies, plus the Grand Prix de Paris. He has raced in 11 countries—France, England, Ireland, Australia, India, Egypt, Italy, Argentina, Belgium, Germany and the U.S.—and has won victories in all but the last two.”

Johnstone was three times champion jockey in France and indeed was a “champion” at home, having won the Sydney jockeys’ premiership in 1922 while still an apprentice. He beat fellow apprentice Jim Munro, who would later ride in Germany.

His career was something of a roller-coaster from the start. In 1925, he was banned from riding in Sydney because he had – against the rules – gained access to his in-trust apprentice earnings and married.

At Armidale in November, 1927, he apparently conspired to lose a race and was banned for two years. He returned to riding in 1930 with financial problems and a collapsing marriage at hand.

But he reportedly struggled for recognition and opportunity when he completed his apprenticeship and was outed for two years over his handling of a horse called Our Rep at Armidale in 1927.

“The first day left me a credit deficiency which, with a certain bookmaker, could not be met,” Johnstone divulged in his memoirs, The Rae Johnstone Story. So he attempted to orchestrate a boat race, a one-goer later at the carnival, with his mount, the favourite, being beaten.

”The stewards had been correct, I was entirely responsible for organising the disorganised affair,” he admitted and was disqualified for two years. But after becoming established again, he was forced to explore fresh horizons as he had run out of cash and credit. ”I owed a lot of tax and had to sell every conceivable possession,” Johnstone wrote.

He returned to riding in 1930 but still with financial problems and a failing marriage. These were factors in his decision to head overseas.

He then rode in India in 1931, before heading to England and France. Andrew Lemon, in a brief biography, wrote of Johnstone: “Life in Paris appealed to him, and he became romantically involved with Marie Marcelle Augustine Goubé (‘Gui’), a dancer at the Folies Bergère … high living, casinos and what Johnstone called ‘a certain hypnotic fascination for the limelight’ ensured that he retained little of his large earnings

“He rode in India in 1939-40, but returned to Paris where, on 12 March 1940, he married Marie (whom he called Mary). They made their way to Monte Carlo. Johnstone contrived to ride at meetings at Lyon, Vichy and Marseilles until late 1942 before being interned by the Italians. He claimed that he escaped from a German-bound train in 1944 and was helped to cross the military lines to liberated Paris. By mid-December that year he was back in the saddle.”

McHale wrote that marriage changed him: Johnstone was “young, cocky and successful…and backed his own mounts heavily with his own money, tossed many a purse to the croupiers in Deauville and other gilded gambling halls. All this stopped abruptly when Rae married his present French wife, Marie, in 1940, and he hasn’t gambled since. During the Nazi occupation, Rae was tossed into a French concentration camp as an enemy alien. He escaped, hid out, and was in the saddle again six weeks after the Germans left.”

Exactly what happened in the war years seems a little unclear.

I’ve not seen, first hand, his biography but I understand Johnstone describes being arrested – at his apartment in Paris – by the Gestapo and being interned at a camp of 800 prisoners near Belfort, about 500 kilometres east of Paris and close to the Swiss and German borders, between 1943 and 1945.

He survived on Red Cross parcels as the food supplied was “filthy” and he noted that his wife was allowed to visit once a week. He talks of his escape coming amid the confusion of moving 800 people to the station to be transported to Germany and that he then spent three months living in an attic room in the local village and then in a farmhouse with the help of the French Resistance who assisted him through enemy lines, walking 25 kilometres in daylight.

All the while, escaping from the station platform and trekking through enemy strongholds, he feared being shot at any moment. He, apparently, eventually got to Paris with “his hair a foot long, his shoes porous and his suit in rags” and weighing ten stone as he’d eaten nothing but starch for two years.

Some newspaper reports have him detained for as long as four years in concentration camps but it’s more likely it was two. Some, corroborating his story, suggest he was arrested, in France, by the Gestapo but managed to escape while en route to Germany and then avoided recapture with help from the French Resistance.

Johnstone did ride in India during the French off-season and did return to France when war broke out despite pleas from his friends and colleagues and some reports have him surviving the concentration camp as Mary was able to smuggle food to him.

The Sporting Globe reported, in December 1946, when Johnstone returned to Australia after 15 years abroad, that “Johnstone was riding in France until November, 1942 but when the French racing broke up he went to Monte Carlo, where the Italians picked him up in December.

“They said they wanted him for three minutes questioning, but the three minutes was extended to three months in a concentration camp before they released him under an enforced residence bond. This meant that he had to report to the authorities twice daily.

“Later the Nazis imprisoned him and held him in various internment camps for months. He asserts that only Red Cross parcels stood between him and starvation or worse.”

Another account is, as follows: “He was living in Paris at the outbreak of war, and when the Germans captured the city, Johnstone and his wife moved to the Mediterranean coast. In 1941, he and his wife made an attempt to escape to Spain, but they were betrayed by a guide and the Nazis interned them in a camp in the south of France. When the Allies invaded the south of France in 1945, Johnstone and his wife escaped from the concentration camp and were hidden by the Maquis for 63 days while the Nazis were searching for them.”

Whatever exactly happened, it is likely he endured a harrowing time.

Lemon wrote: “Johnstone attributed his ‘oriental look’ to his mixed descent (Irish-German and Portuguese-Welsh) and was offended by being nicknamed ‘Togo’ (after the Japanese admiral).”

Many others contended that Johnstone was of aboriginal descent. “Rae Johnstone always passed himself off as being from a Portuguese background and said that his real name was Davies,” John Maynard, author of Aboriginal Stars Of The Turf, told Presnell in 2002.

”He said he had been forced to take his grandmother’s maiden name Johnstone when he became apprenticed because there were several other jockeys named Davies at the time,” Maynard said. Presnell wrote: “Maynard found Johnstone’s grandfather ‘was unknown’ which adds weight to the story of Johnstone’s Aboriginal heritage.”

Johnstone was born in 1905 at Lambton, near Newcastle, and was about seven or eight when his family moved to Sydney. At 14, he was apprenticed to Jack Phoenix.

It’s often been written that Johnstone, at 15, promised his mother that if she would let him become a jockey, he would one day ride the winner of the English (sic) Derby.

After taking the Derby on My Love, in 1948, various papers noted: “Togo was still a pupil at the Marist Brothers’ College, Darlinghurst, when he tried to persuade his mother to let him become a jockey. Mrs. Johnstone didn’t want Togo to be a jockey, but after he had nagged at her for six months, she gave in and had him apprenticed to Jack Phoenix, a Kensington trainer.

“Mrs. Johnstone believed that a few weeks of cleaning stables and getting up at 4am to ride work would change Togo’s ideas about the glamour of horse racing.”

Six months after he joined the Phoenix stables, Togo rode his first winner — Grey Arrow, at Rosehill in June 1920.

Johnstone died on April 29, 1964 at Chantilly. He divided his estate between his wife and his mistress, Margo Winnick.

He was something of a sporting legend which was acknowledged at the time.

In 1934, Harry Sunderland, writing from England for the Brisbane Telegraph, reported: “It has been a great week for Australians in England. The Commonwealth’s first success came when Hec Gee played a glorious game at half-back for Wigan who won the Rugby League championship final over Salford. Then jockey Togo Johnstone rode Colombo to victory in the Two Thousand Guineas on the same mid-week day that Don Bradman was compiling the first half of his opening score of 206 at Worcester.”

Fourteen years later (and more) he was still going strong as Harry Kneebone, in the Adelaide Advertiser, wrote in 1948: “The key to Australia’s sporting aspirations in England this summer is held by four men—Don Bradman, Norman Von Nida, John Bromwich and “Togo” Johnstone. “Togo” has carried out his part of the contract by winning the three Derbies, and Bradman, at this stage, is at short odds to lead his team to a victory which will retain the Ashes. Von Nida and Bromwich are warm favorites for the British golf open and the Wimbledon singles and may complete one of Australia’s most successful years in overseas sport.”

For the record, Bradman’s team – The Invincibles – won the Ashes 4-0 while Bromwich was beaten in the final at Wimbledon and Von Nida tied for third in the Open.

Johnstone, meanwhile, continued to succeed at the highest level – winning the Derby again in 1950 and 1956 and claiming a second Arc in 1954.