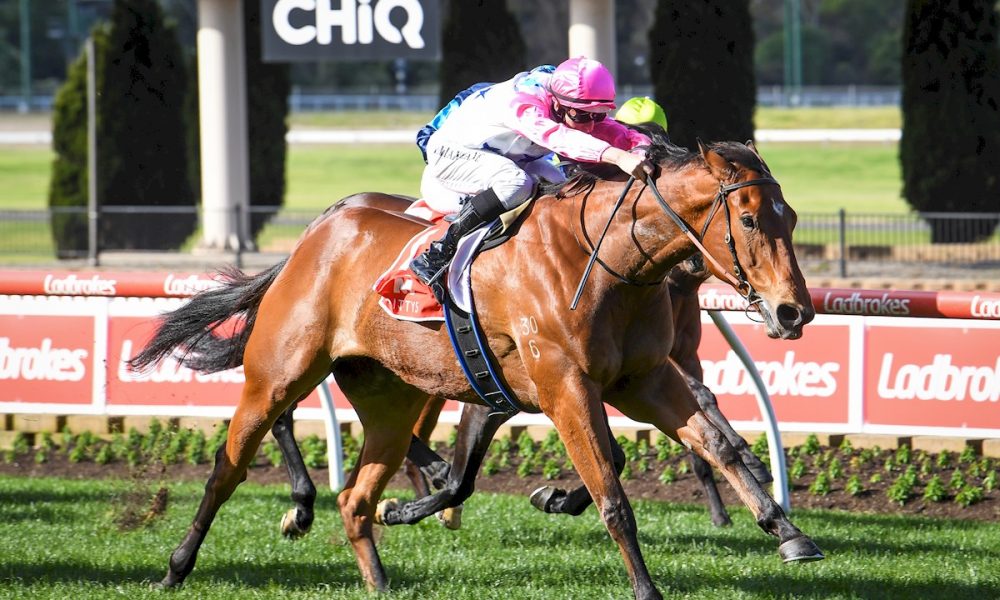 We all know the value of meticulous planning in breeding but also of its apparent antithesis – luck. Sometimes those two powerful forces combine. Sometimes one blows the other out of the water.

It was lucky Pierro took ill in his third season of 2015. Not for Coolmore and his shareholders of course, but, six years later, for anyone who backed The Inferno in his Group 2 McEwen Stakes win last Saturday at Moonee Valley, or the eight of nine he’d won in Singapore before that.

Westbury’s matings maven Russell Warwick had done his research and was convinced their mare Spina Rosa – by the super broodmare sire (and just sire) Redoute’s Choice – should be covered by the son of Lonhro that year. Among other things, this would blend a large sprinkling of the Blue Hen Natalma, which in turn brings a lot of Mumtaz Mahal as well.

Alas poor Warwick. Spina Rosa missed on a first try with Pierro, and before she could go again he had been scratched from the season after colic surgery. That allowed just 76 named foals in his 2016 crop – half that of the year before – and is why he does not have many four-year-olds racing now.

Holy Roman Emperor, Danehill’s highest-rated two-year-old, was in the headlines through the feats that year of NZ Derby-ATC Derby-Caulfield Cup winner Mongolian Khan, but in truth was on his way to a fairly unremarkable record in Australia. Mongolian Khan’s three 2400-metre triumphs helped his sire finish the mid-30s on the Australian general table in 2015 and 2016, but he would dwindle far below those highs.

Still, Warwick liked what he saw, drawn more to speed influences than seeking a 2400-metre horse, and the result of Holy Roman Emperor over Spina Rosa is now The Inferno.

“Holy Roman Emperor had a big presence in Hong Kong, obviously for his colts. There was a bit of a punt that if he got you a colt you might do well out of it,” Warwick tells It’s In The Blood. “So when we got the foaling notice confirming a colt, that was a good day!

“There’s not so much black type in Asia, so Holy Roman Emperor probably didn’t get as much recognition as he deserved, but I thought he had a pedigree you could play with quite well if you had the right mares.

“You see a lot of stallions who are called failures, but probably just didn’t get the right mares. And shuttling stallions – the pools of genetics in each hemisphere are quite different. Sepoy was basically a failure in Australia, but went to Europe and found the bloodlines he needed.”

Bred in Australia, The Inferno was offered as a weanling when Westbury’s previous majority owner Eric Watson downsized in 2017 (the same time he sold Spina Rosa, to Jamieson Park). Warwick and some friends bought him for just $10,000 and flipped him half a year later for $140,000 at Karaka. Buyer Cliff Brown trained him to five stakes wins, including two local Group 1s in Singapore, and he appears to have transitioned well in the trainer’s move to Melbourne.

So what was it about the mating that convinced Warwick it was – excuse the faint praise – not bad compensation for missing Pierro?

Bred by Westbury, Spina Rosa raced only twice for Newcastle’s Kris Lees for an eighth and a third in provincial maidens in 2012, but had shown promise.

“Eric thought she could make an Oaks filly, but she suffered tendon injuries twice and was retired,” Warwick says.

Spina Rosa’s dam, Gypsy Geena, by Woodman (USA), won one of her 19 starts – at Wagga – but was a half-sister to Lotteria, winner of two Group 1s and placed in three others, including her second in Makybe Diva’s unforgettable 2005 Cox Plate. That Lotteria was by Redoute’s Choice made Spina Rosa her three-quarter sister. And that Lotteria was raced by none other than Harvey – who bought Westbury in 2008 – added a coincidental twist.

Next out came The Inferno. The mating brought a close 2×3 doubling of Danehill, via sons in Holy Roman Emperor and Redoute’s Choice. As regular readers might know, great though Danehill is, crosses involving two of his sons is considered a far worse blend than double-daughter or one of each. The theory is backed by data on Redoute’s Choice line sires: where the mare’s strain of Danehill is through her sire line, there have been just ten stakes winners from 910 runners, or 1.1 per cent. Where the mare’s strain of Danehill is not through her sireline, there’s been 29 stakes winners at 5.4 per cent. (Thanks to Arrowfield’s Peter Jenkins for the stats).

Why has The Inferno confounded the pattern? There needs to be something else stronger in the pedigree to override the disadvantage, usually found through mares imparting more DNA in their extra X chromosome.

As with Pierro, Warwick saw this in Natalma and Mumtaz Mahal.

Natalma appears six times in The Inferno’s pedigree, in generations five to seven. Two of them are as dam of Danehill’s grandsire Northern Dancer, two as Danehill’s third dam, once because Northern Dancer is the sire of Holy Roman Emperor’s second dam Fanfreluche (CAN), and lastly since Northern Dancer’s son Nijinsky sired Redoute’s Choice’s granddam Dancing Show (USA).

Mumtaz Mahal makes six appearances amid The Inferno’s seventh to ninth columns, with more beyond. To name a few, she’s in Natalma’s dam’s side four generations back, and is the granddam of Nasrullah, grandsire of Holy Roman Emperor’s damsire, the great Secretariat. Mumtaz Mahal is also on both sides of the pedigree of Woodman, of Spina Rosa’s damsire.

“The most drawing influence for me in the pedigree was Natalma, but you get a real saturation of Mumtaz Mahal, a real speed influence, right through the family,” Warwick says. “I think you can draw the conclusion The Inferno’s speed and precocity come from that saturation.”

“My employer Gerry Harvey tells me double Danehill doesn’t work and I’m mad,” Warwick laughs. “But if you’ve got other influences in the right place in the pedigree, it can actually override the recent cross of Danehill, so you’d still do the mating rather than not.

“Everything depends on where things sit. We have a pattern we observe and we feel if duplications are in the right place in the pedigree they’ve got an opportunity to work. There’s other duplications that could occur further back or closer up, but because they’re not in an ideal position they don’t get the opportunity to express themselves.

“My view here is you’re not just relying on Danehill to work. We’ve got a saturation of Mumtaz Mahal positioned right through the whole pedigree, so there’s a good chance it’s going to work.

“So a 1921 horse can trump a 1986 horse. You can find many examples of that. That’s one of the really intriguing things for me in doing pedigrees: the information is factual, it dates back 150/200 years, and it’s always been well recorded.

“You also love to see those champions emerge and there’s no duplication until six or seven generations, and you say, ‘Where’s the influence there?’ You go back one more line and you might see this saturation of an elite mare or stallion that influences the entire pedigree.

Meanwhile, Jamieson Park has bred through Spina Rosa a So You Think filly called Think She’s Good, who’s unplaced from four starts for Brisbane’s Tony Gollan (all on soft tracks, mind you), and a yet-to-race Ocean Park two-year-old filly.

And here’s perhaps the juiciest twist of all: She’s due, soon, to drop a foal by … Pierro.