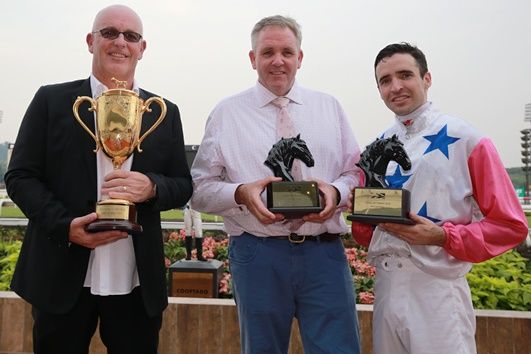 Singapore has a big Saturday in store. The Queen Elizabeth II Cup (Listed, 1800m) is this weekend’s local highlight, drawing together the best the Lion City can muster, but 4,000 miles along a south-easterly flight path, Kranji’s most exciting galloper of recent times will step out for The Everest (1200m) at Randwick carrying the keen support of those he left behind.

The Inferno (Holy Roman Emperor), or Inferno as he was known before he relocated to Mornington, Victoria, earlier this year, was Singapore’s champion juvenile in 2019, champion sprinter and champion three-year-old in 2020, and seemed destined to dominate the Kranji ranks throughout 2021. He was the beleaguered Singapore racing scene’s great new hope.

But while trainer Cliff Brown’s relocation to Australia has taken The Inferno to a new arena, the emotional ties to his former home remain strong. Singapore’s racing faithful, it can be guaranteed, will be watching keenly when the one-time bargain purchase takes on Classique Legend (Not A Single Doubt), Nature Strip (Nicconi) et al in the AU$15 million feature, the world’s most lucrative sprint race.

“I don’t know what your emotion would be if it happened,” said Brown, unwilling to allow his thoughts to venture into what an Everest win might look like for The Inferno, his team, the gelding’s owner Glenn Whittenbury and the folks back at Kranji. “My thought is we’re a few days out and we’ve just got to make sure everything goes right.”

So far, not much has gone wrong for the five-year-old since he touched down in his new home, not since his first-up run, anyway, which Brown, in his own words “buggered up” by misjudging his charge’s fitness. A thrilling win since in the McEwen Stakes (Gr 2, 1000m) and a narrow, deep-closing second to Wild Ruler (Snitzel) in the Moir Stakes (Gr 1, 1000m) last time sealed his place in the Everest via James Harron’s ticket.

Having their potential spotted early and by the right people often has a bearing on an athlete’s career trajectory, and the astute eyes of two men have put The Inferno on his particular route to the top table. The first belonged to Auckland-based bloodstock agent Paul Willetts who took a liking to the bay at the Magic Millions Gold Coast weanling sale back in 2017 and paid a pittance at AU$10,000.

The gelding was bred by New Zealand’s fallen multi-millionaire playboy Eric Watson, who part-owned Westbury Stud as well as the Warriors NRL team. Despite his weanling price, his pedigree had quality to it: his dam, the two-race maiden Spina Rosa (Redoute’s Choice), is a three-quarter sister to Lotteria (Redoute’s Choice) who won the Myer Classic (Gr 1, 1600m) – now the Empire Rose Stakes – and the Flight Stakes (Gr 1, 1600m).

“He did have a few little issues with his X-rays but with the advice that we had, we thought that if he went on, he should be alright so we took the risk, it wasn’t a big risk, and he went the right way,” said Willetts, recalling that the unfashionable status of his sire Holy Roman Emperor (Danehill) helped keep the price so low for his client, Tim Barry, who made the purchase under Buffalo & Co. Ltd.

Barry, who holds a ten per cent share in the champion mare Verry Elleegant (Zed), had set up a pin-hooking concern and Willetts’ judgement proved to be profitable. One year later, Barry, via Westbury Stud as vendor, offered The Inferno as a yearling at New Zealand Bloodstock’s Karaka Book 1 sale where the second set of keen eyes spotted something worth seeing. They belonged to Chris Bock, Brown’s right-hand man of 20-plus years.

“Chris loves the yearling sales,” said Brown. “He does a great job looking at all the yearlings. He’s the racing manager as well, he works in the stables, he’s a jack of all trades but highly-talented and very good at selecting a horse. He’s a very organised and intelligent bloke and he’s very unassuming.”

Bock signed the docket at NZ$140,000 on behalf of Whittenbury’s Barree racing operation, $10,000 below the maximum they had agreed to stretch to.

“Chris liked his walk and he had a really good girth and he was quite long. He said he thought he was going to grow into a really strong, solid, big horse,” Whittenbury recalled.

Whittenbury has been involved in racing since his early years on a 200-acre farm in Mount Macedon. His father, the late Allan Whittenbury, was an enthusiastic and successful small-scale breeder and when the family moved off the property, they boarded their mares.

“One of our first breeding prospects was Ponton Flyer, she ran second in the Blue Diamond, won the Kewney Stakes and we started breeding from there. When dad was alive, between the two of us, it was so much fun because I’d be firing them at the racetrack and he’d be poring over the breeding statistics,” Whittenbury continued.

Whittenbury ventured to Kranji for the first time in May 2012 to attend the Singapore International Cup (Gr 1, 2000m) and KrisFlyer Sprint (Gr 1, 1200m), which the Singapore Turf Club (STC) has since scrapped. He was struck by the quality of the facilities and the good prize-money on offer and, six months after that first visit, on November 30, 2012, his homebred Lord Brompton (Delago Brom) carried his Baree Stable colours for their Singapore debut, running second for the Brown stable.

While Kranji remains an impressive facility, the prize-money in recent years has diminished as Singapore racing has struggled through changes in the STC’s leadership – former Mediacorps chief customer officer Irene Lim was appointed president and CEO in July 2020 – a lack of racing industry knowledge within that hierarchy, political and community indifference to the sport, and anti-gambling strictures.

Covid-19 policies and restrictions have not helped either and Kranji has not been open to the public since April 2020. The situation is far distant from the glory days of the brilliant Rocket Man (Viscount), who carried the Singapore flag to major triumphs in Dubai and Hong Kong and starred at Kranji’s vibrant international nights when Group 1 horses from around the world flew in to compete.

Whittenbury, who also raced the five-time local Group 1 winner Debt Collector (Thorn Park) in Singapore and still has four horses in training with Brown’s former assistant Tim Fitzsimmons, admitted to being “very concerned” for the sport there. He is not alone. By most accounts, racing’s stakeholders in Singapore have limited optimism for the future.

“When Debt Collector won his first Group 1, all Group 1s bar the two main internationals were worth about S$700,000, then two years later he won again and they were a million, and then two years after that the same races were S$300,000 and going backwards in a hurry. I’m concerned that there’s going to be a lack of depth there. I love racing in Singapore but I can’t see many people buying $100,000 yearlings specifically for Singapore at the moment,” he opined.

Whittenbury reveals that the original plan back in early 2020, pre-Covid, had been to target overseas Group 1s using Singapore as a base. Once Brown decided to depart full-time, it made sense for The Inferno to relocate with him. Had that not happened, Brown said the horse, a mile winner at Kranji as a three-year-old, could well have been stretching out in the Queen Elizabeth II Cup this weekend rather than chasing worldwide fame and fortune in The Everest.

“I would have had to because I wouldn’t have had any other options. The reason we came back to Australia and brought him with us is because the racing has changed a lot in Singapore and there weren’t going to be those sprinting options for him,” he said.

The Inferno is not the lone high-profile Singapore interest in Australia right now. Another exile, Aramayo (Poet’s Voice), won the Kranji Mile (Listed, 1600m) and Raffles Cup (Listed, 1600m) in Singapore last year, and showed the merits of that form when just pipped at the post in the Epsom Handicap (Gr 1, 1600m) at Randwick a week and a half ago.

The Inferno, who Brown described as “quirky, grumpy … he doesn’t mind biting you” but also “a complete professional” when ridden, has not surprised his connections this prep in terms of his ability but they have been relieved, too, that he has overcome the unknown factor of a new environment and reproduced his Singapore form.

“I knew when I was in Singapore that he was the best horse I’d ever trained,” Brown added. “The interesting thing about it is we’ve now got to raise the bar again because this is his biggest test. He’s done a great job so far but we’re up against the cream now.”

Should The Inferno triumph, it would not only cap the incredible rise of a foal bought for peanuts but also provide some feelgood to those working hard on the ground to keep the Kranji show rolling. Yet, as the rejuvenated Lim’s Lightning (Lope De Vega) – a failure when tested in Australia in 2019-20 – heads into the Queen Elizabeth II Cup as the leading light, the inescapable reality is that The Inferno’s presence in Australia only emphasises his absence from a jurisdiction in danger of receding further into the shadows of low significance.