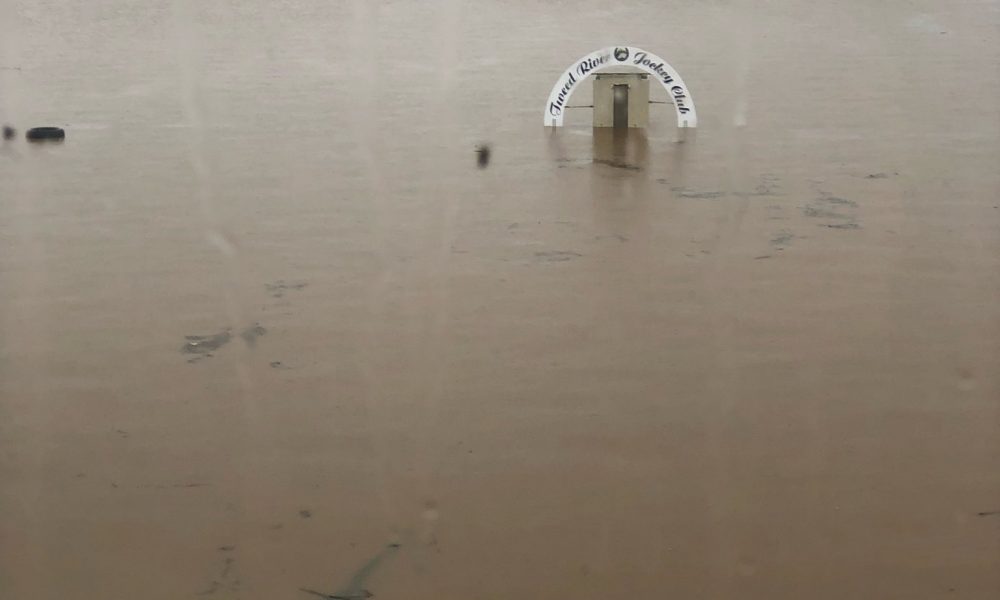 The recent devastating floods in northern NSW took a huge toll on livestock with thousands of head of cattle, sheep, and horses losing their lives.

The immediate impact on both the animal and human population in the region was catastrophic and weeks after the floodwaters have subsided the dire consequences of this natural disaster are still being felt by many including those in the racing and equestrian industries.

South Grafton-based veterinarian Dr Oliver Liyou helped ease the plight of a number of local horse owners by taking in sick and injured horses at a temporary hospital that he set up at his property and he’s now trying to catch his breath after what’s been a hectic few months.

“I have never been so busy in all the last 50 years of my life as I have been in the last three months.

“I think we are in hangover mode where it’s still so wet people can’t get their horses back into paddocks and a lot are still on agistment on higher ground. We are on a hill and our paddocks are soggy and in the yards, you are walking in six inches of mud,” said Liyou.

At the peak of the floods, Liyou housed about 20 horses at his farm with 15 vets volunteering their services to assist with their treatment over a four-week period. Some of his clients also lent a hand to look after them.

“The natural disaster brought out the best in people in terms of helping horses. The offers of support were quite inspiring. It was incredible, we had people from all over the world offering to help. It’s amazing what horses motivate us to do and turn our lives upside down to do and they give it back to us in spades.”

Liyou has helped save a range of different horses including several thoroughbreds. His most challenging and favourite case, which he is still looking after, is a 13-year-old New Zealand bred retiree named Ollie.

“He had bad pneumonia and we had to drain his chest. He also had foot abscesses and has hospital plates on his feet and is on a nebulizer and drips.”

Early on things did not look good for Ollie but he is now showing positive signs of making a recovery. He’s one of the lucky ones to have ended up in Liyou’s care.

Sadly, there were plenty not so fortunate that lost their lives through disease and injury or were swept away in the enormous floodwaters.

The aftermath of the worst floods in history in the area is being felt hard by the racing community. Ballina-based trainer Steven Lee is at his wit’s end trying to cope with the pressures the big wet has created.

He is struggling to be able to work his team of 40 horses and the cancellation of race meetings, including today’s scheduled meeting at Murwillumbah, has had a negative impact on his business.

“What do you do? The worst part of it, and people don’t understand, is that the biggest cost is that we are not racing.

“If you go back through the number of meetings the Northern Rivers has lost and the prize–money that has gone up in the air it’s frightening.

“I have horses in the stable with spell next to their name and they haven‘t spelled because they haven’t raced because it‘s been washed out. You can’t even put them in a paddock because their feet are stuffed from the wet ground. It’s bloody killing us but then I’m probably luckier than a lot of people,” Lee lamented.

Adding to Lee’s woes is the fact he’s been good enough to take in eight retired horses that were surrendered by their owners who lost either their properties or source of income as a result of the disaster and could not continue taking care of them.

Lee said they were deemed unsuitable by Racing NSW to take into their rehoming program and so he’s now looking after them at his own cost on his 60-acre property with little or virtually no support from the industry during or since the floods.

“They (Racing NSW) did help us with some sawdust and things like that but that’s about it.”

As the racing carnivals and yearling sales roll on spare a thought for those in the industry who have been affected by the recent floods. For them, the consequences will be hard felt for many years to come. Some people, and horses, will probably never recover and what’s really worrying is that more floods are predicted.