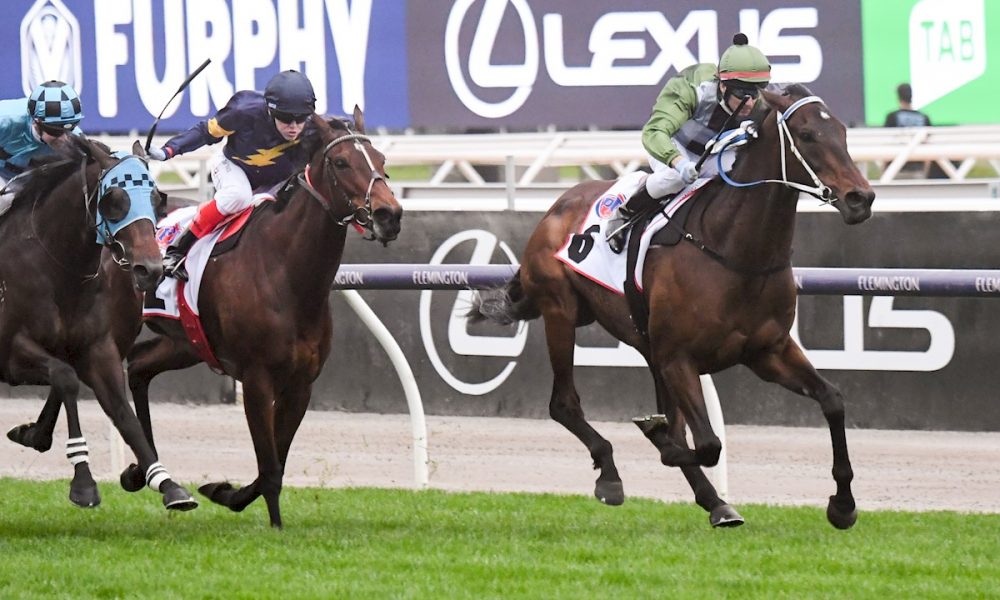 While there’s plenty of hype surrounding Australian racing’s latest superstar Incentivise (Shamus Award), the winner of Saturday’s Makybe Diva Stakes (Gr 1, 1600m) at Flemington, we shouldn’t lose the lesson in it all about the importance of patience and perseverance in the thoroughbred game.

Long before his racing days had even begun, Incentivise was just a lanky, knock-kneed foal in the paddock at Windemere Stud in Queensland where he was bred.

He grew into a tall, slightly built, plain type of horse and his gawky looks earned him the nickname ‘Splinter’ from his breeder and original trainer Steve Tregea.

“He was backwards as a foal and knocked kneed and needed screws in his knees to widen them out. He’s ended up fairly correct but would not have ended up that way without the extra attention.

“He was a tall, slab-sided sort of horse and he’s still a little bit like that now. He was always going to grow up and not out.

“Looking at him next to Mo’unga in the enclosure yesterday, even though he’s tall he looked like he would fit inside him,” said Tregea.

Although that might be the case, Incentivise managed to beat the hulking Mo’unga (Savabeel) fair and square at Flemington on Saturday, announcing to the world that he’s the real deal.

Now under the care of champion trainer Peter Moody, he’s the clear favourite for the nation’s two premier staying contests, the Caulfield Cup (Gr 1, 2400m) and Melbourne Cup (Gr 1, 3200m), and has left many shaking their heads in amazement thinking he might well be a ‘freak’.

In racing parlance, “freak” usually means a horse with a very rare ability and, funnily enough, that word once took on its more literal meaning when it came to Incentivise.

“He was a bit of a freak in a lot of ways early in the piece, because he would not eat and he was a real pussy cat and we didn’t like him that much at all,” Tregea said.

“He was so tall and had a few quirky ways. You could not even walk into the wash bay with him at the stables and a few other things like that.

“Everywhere you went with him you had to have a twitching rope otherwise he would fight you to the death. He was very immature until the last part of his last preparation.”

A lesser horseman than Tregea might have given up on the strange sort of character that Incentivise was all those years ago, for the now five-year-old didn’t race until four.

But he kept forging on with the young horse that he bred out of his prized mare Miss Argyle (Iglesia) who he had a soft spot for back when she was a yearling.

“She was a beautiful yearling. We were selling yearlings at the time at the Magic Millions sale and Eureka had her in their draft and I thought ‘what a beautiful filly’. I didn’t buy her then because every time I went there the Waterhouse team were looking at her and they got her,” Tregea recalled.

Miss Argyle raced during the Equine Influenza era and her career was hampered. Although she was a very fast horse, running second in a Gimcrack Stakes (Listed, 1000m) and winning three trials, after just two starts, the second when finishing down the field in the Sweet Embrace Stakes (Gr 2, 1200m), she was retired as a maiden on the track at the tender age of three.

“She ended up at a broodmare sale and we ended up buying her. She then went straight into foal as a three-year-old and had ten foals,” Tregea said.

“Unfortunately she died last year when foaling a Pride of Dubai.”

Tregea had nothing to lose keeping on with her kooky son Incentivise, afterall, that’s the beauty of breeding, owning and training your own.

“I guess it’s a case of the dripping tap. If you hang in there long enough something comes out of it.”

The tap turned on full bore when Incentivise led all the way to win by nine lengths in a benchmark 80 race at Eagle Farm over 1810 metres on June 5. That was the day Tregea, and plenty of others, really knew he was something special.

And it was at the start prior to that at Toowoomba, where he won just as dominantly, that Brae Sokolski twigged about Incentivise.

After randomly spotting the race on Sky Racing, he was straight on the phone to Ozzie Kheir to hatch a plan to try and buy the horse.

“Brae said to me, ”Can you have a look at this horse Incentivise that just won at Toowoomba?”.  It might not be beating much or worth it but I really like it,” Kheir said.

“I thought it looked OK and could be at Group or Listed level and he said ‘I love it, we should just buy it’. He was really upbeat about it.

“We spoke to Steve and he gave us a couple of no’s along the way but he eventually gave in and from there it’s been an amazing journey,” said Kheir.

After lots of toing and froing, Kheir and Sokolski are now very fortunate to be shareholders in a horse that could win them a Caulfield or Melbourne Cup and who knows what else beyond this spring.

“You could say it’s lucky, but as I say to most people you have to have a go at these things, we thought we might have paid more than he was worth but Steve was adamant we weren’t, so there was lots of haggling.

“We have bought many more horses in the past that we paid way too much for that don’t perform. Incentivise’s ledger looks pretty good at the moment,” Kheir said.

When the deal was crunched, Tregea was wise enough to keep an ownership share and, while he might have since handed over the training duties to Moody down in Victoria, he’s still along for the exciting ride.

“It’s a dream result, you couldn’t wish for it to turn out any better. We have 12 other horses in work and that’s plenty to keep me out of trouble.

“We are lucky he’s ended up with Peter. He’s an approachable fella and it’s not like he’s going to put him into his system and disregard what I say,” Tregea said.

After the handover became official, Moody did plenty of diligence on Incentivise.

“When the deal was done he came to Queensland and spent a day at the races and came out to the farm and learned as much as he could about the horse. It’s a relief to hand that sort of responsibility to him,” Tregea continued.

“For the first couple of weeks I told him about his funny ways and that he doesn’t need a lot of work but he’s the man on the ground now.”

Like Tregea, Moody knows only too well the importance of patience and persistence.

He took a long hiatus from what he loves doing and does best to recalibrate after a dark chapter in his career and now he’s off and running with his first Group 1 winner since returning to the training ranks.

It will no doubt be the first of many with a horse they call Splinter.