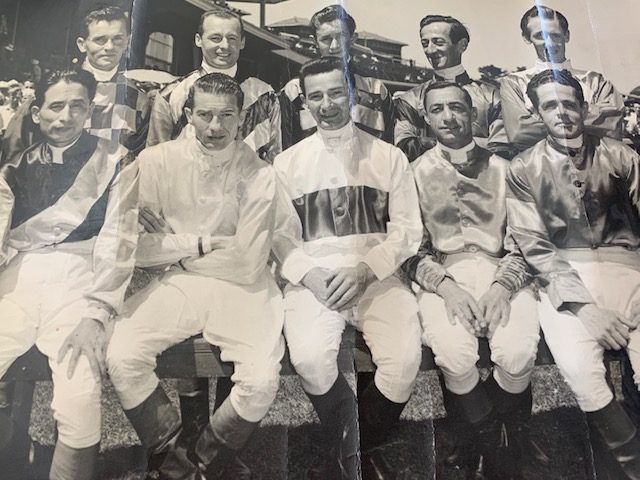 Ron Hutchinson says his success and that of fellow Australians, especially in England, was inspired by Scobie Breasley’s deeds but also, in part, due to timing.

“Charlie Smirke and the great (Sir) Gordon Richards had just finished when I arrived,” he said.

“I was getting rides in England even in my second year in Ireland. I was pretty popular. One night I was approached by Bernard Van Cutsem, who was a breeder and trainer, who asked if I would like to ride for the Norfolks next season.

“The next thing I meet the Duchess and she said ‘Scobie’s our jockey but he’s getting a bit older and might retire soon so would you ride second to him?’

“I preferred England to Ireland. It wasn’t a difficult decision,” he said.

Geoffrey Hayes, writing in the English press in March 1962, observed: “The old firm of Scobie Breasley and Lester Piggott will again be claiming the spotlight in the 1962 tussle for the jockeys’ championship but look out for Australian stylist Ron Hutchinson. Likeable, unassuming Ron has a way of his own with horses. They go kindly for this confident, unhurried rider.

“The supreme artist Breasley and the inimitable Piggott stood head and shoulders above their fellow jockeys last season…with their vastly differing styles; Breasley looks part of the horse, whereas Piggott, 21 years his junior, rides with exaggeratedly short leathers. They fought out a long and exciting battle for the jockeys’ championship.

“But another whose name will be cropping up pretty regularly in the coming months is Hutchinson. An exponent of the Australian ‘bobbing” style, swinging the body up and down as the horse canters to the post – Hutchinson will ride for the Duke and Duchess of Norfolk’s powerful Arundel stable. He is a beautiful stylist with hands that make horses go kindly for him. Confident and unflurried, you will see no bobbing from him during a race. He sits still, gets the utmost out of his mounts without resorting to the whip and he keeps a horse perfectly balanced.

“Over 20 per cent of his rides In England last season were winners and he was top jockey at the Goodwood meeting on his first visit to the course. I predict we shall be hearing plenty about this likeable, quietly spoken Aussie. I would not be surprised to see him the principal challenger to Breasley and Piggott, while another Australian who is sure to hit the headlines is Harry Wragg’s new jockey Bill Williamson.”

The Daily Mirror also hailed his move to England. “English racegoers welcome the news that the Australian jockey, Ron Hutchinson, will make his base at Epsom next season and will be riding regularly in this country. Enough has been seen of him since he has been retained by Irish trainer, Paddy Prendergast, to emphasise that he is a jockey in the world class,” it reported.

“It was different (in England) but I fitted in straight away,” Hutchinson said. “The tracks were uphill and down dale. If you tried to lead all the way you’d get beat but being a patient jockey, I was always taught to be the last to challenge. Hold up as long as you could, I was taught.

“It was a great time for so many Australian jockeys who all did so well.”

Despite his success, Hutchinson – nicknamed the “bobber” by some in England – says there was little resentment.

“I only fell out with one jockey there, Doug Smith’s brother Eph Smith and he just didn’t like Australians. He was the only bloke who was nasty to me, all the other English jockeys were pretty good to me,” he said.

Doug Smith, five times champion jockey, and Eph rode 5,425 winners between them, which makes them the most prolific riding brothers in English racing history.

“We weren’t taking all the rides so most of the boys were OK with us (Australians) and they had their own retainers: Lester had Noel Murless, Geoff Lewis had Captain Hastings-Bass; Joe Mercer had Dick Hern, Jimmy Lindley was riding for Towser Gosden, John Gosden’s father,” he said.

Hutchinson says that among that group, Lewis was a good friend as was Geoff Wragg. “Had a lot of time for Geoff Wragg, he was a lovely bloke,” he said.

Lewis, in 1958, was retained by the Kingsclere trainer Captain Peter Hastings-Bass who died unexpectedly, at just 43, in 1964 and his role was taken over by Ian Balding who kept Geoff on as stable jockey.

“I was mates with Geoff who, of course, won the Derby on the mighty Mill Reef who was trained by Balding who’d married Hastings-Bass’ daughter Emma. That was a good career move. He was also riding for Paul Mellon – who was a very wealthy man who had some wonderful horses including Mill Reef.

“I remember there were huge financial problems after the Captain died. His son William Hastings-Bass, the Earl of Huntingdon who we all know in the racing game, had to pay the death duties I think but he had no money. Assets yes, but no money,” he said.

After his death, his estate became involved in a lawsuit with the Inland Revenue which gave rise to what is known in the law of England and Wales as “the rule in Hastings-Bass”, which allows the court to set aside mistaken trustee decisions which would not have been made had the true tax outcome been correctly understood.

“Ian was quite young I think when he took over (he was 26). He was a very good organiser. They were all characters, the trainers, and always seemed to be socialising.

“It was all part of what I saw as a “different” world. I never lived in Newmarket, you had to be in the clique there. Once you got in it was OK, but I never spent much time there, but there were some crazy times.

“I remember the yearling sales in December, one year, there. After the sales, l was invited to this dinner with Henry Cecil and Julie Murless and the Norfolks and lots of important guests. Next thing I’m sitting opposite Julie and she picks up the butter balls and threw them all over Henry who had a lovely maroon smoking jacket.

“The place went crazy, they threw everything. I think she just threw the butter for fun. I had a nice suit on and I was dodging potatoes and carrots,” he said.

The process of training and the trainers themselves were eye-opening to the boy from Yarraville.

“The trainers were a law unto themselves in those days. I remember when Lady Parkhurst, one of Paddy’s biggest owners, had arranged to come and see the horses but she might have got there 15 minutes late and Paddy refused to bring the horses out. ‘It’s too late and we can’t change the horse’s routine’ he told her.

“She told me that herself so it was true.

“Their techniques were steeped in tradition with the beautiful rolling gallops. I was surprised there was no swimming, certainly no swimming pools in those days. ‘No swimming races’ the trainers there told me.

“I was probably the first to put in a swimming pool there when I began training at a place called Reigate. We built a pool. My son Raymond was a vet and had just finished his training.

“Ray went to America and came back with this idea of a straight pool. Still, the English trainers would repeat ‘there’s no swimming races’ but soon enough people would send horses up to our little farm.

“But that aside, really the training facilities in England are so wonderful with all the various gallops. Even now Australia is so far behind the times,” he said.

Hutchinson continually travelled back and forth from Australia.

“I only had one winter in all the time I was there and that was 1963. It was the worst winter for 100 years, started to snow on New Year’s Day and we didn’t see a blade of grass until mid-March. I swore I’d never stay again.

“I went and rode in America one year, 1964 at the end of the season, and went to Miami.

The Hutchinson and Hayes family connections lived on and include their respective sons Peter and David combining to win the Caulfield Cup with Fraar in 1993.

“I’d usually miss the spring carnival but in the early days I’d come back in October in time for the Melbourne Cup. I got back, in that first year, for the centenary Cup and rode Nilarco who didn’t feature.

“Old Jack Besanko had Grand Print. Ray Selkrig rode Lord Fury and he led all the way on him. He was four or five lengths in front on the turn, I chased him but couldn’t get him,” he said.

That year was the first time the TAB (Totalizator Agency Board) operated on the Melbourne Cup. The TAB had operated for the first time at Flemington on March 11 that year.

Laurie Smith, then general manager of the TAB, said: “The state government will receive about £3,450 in percentages which is more than it ever got from SP bookmakers.”

On Cup day, the off-course turnover was £244,627, while the on-course tote held £294,536. And the TAB has since provided the lifeblood of Australian racing.

Hutchinson recalls that English racing could have enjoyed the same benefaction had they “listened to” VRC committeeman and barrister Eugene Gorman, who was awarded the Military Cross after the Second Battle of Bullecourt, on the Western Front, in WWI.

“It was round about 1961 or 1962 when Eugene Gorman came to England where they had an opportunity to change from the bookmakers funding to something like our TAB and we met at Scobie’s one time. The Jockey Club decided to stay with the bookmakers which was the worst decision it ever made. I remember Gorman said ‘they’ve knocked back lots and lots of money and they could have easily had the best racing in the world forever’.”

That is ironic, to say the least, given Hutchinson’s observation that the money then was what chiefly motivated the exodus of Australian jockeys. Money certainly couldn’t lure any Australian jockey to England nowadays.

“Of course, it (English racing) had its great charm as well…which it still does. But you wonder what happens when the Queen dies; you wonder, sometimes, how long it (racing) will go on for like it is now.

“You wonder about the parade and pageantry at Royal Ascot. It’s a must to go to Royal Ascot at least once in your life if you’re interested in racing. The history of it all and the Royal Procession is so wonderful.

“It would be great to be part of, I think. Wouldn’t mind it myself. Don’t know about getting the first carriage. I’ll get with Camilla in the second carriage, that’ll do me,” he said.