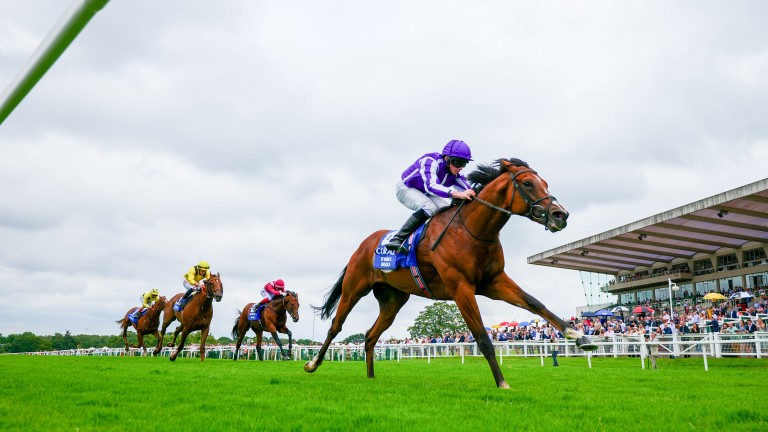 Here we go and may the dissenters start their engines and, yes, not one Australian-trained horse

Unbeaten in four stars in 2021, each at Group 1 level, taking the French 2,000 Guineas and Derby before beating all-comers in the Eclipse and Irish Champion Stakes. The Derby win over Sealiway (Galiway) was franked when that horse then ran bravely, under atrocious conditions, in the Group 1 Prix de l’Arc de Triomphe before beating Dubai Honour (Pride Of Dubai) in the Group 1 British Champion Stakes.

At Sandown, he thrashed Addeyyb (Pivotal) which – like it or not – must demote any international rating of Verry Elleegant (Zed). Yes, he had the weight pull but only that which has long been dictated as his three-year-old entitlement under the weight-for-age scale.

At Leopardstown, he accounted for the Arc runner-up Tarnawa (Shamardal) and the Guineas and St James’s Palace Stakes winner Poetic Flare (Dawn Approach).

St Mark’s Basilica, bred by Australian Bob Scarborough and now retired to Coolmore Stud, was the world’s best performed turf horse in 2021 – in my opinion.

Unbeaten in six starts for the year. Placement carefully managed until stepped to Group 1 level for the first time in Prix du Moulin de Longchamp which was soft by top level standards and inconclusive as to his quality.

Consequently he did not start favourite in the Queen Elizabeth II Stakes at the close of the season. That distinction sat with the world’s best older miler Palace Pier (Kingman).  Baaeed triumphed narrowly from his elder rival with that wonderful benchmark performing mare Lady Bowthorpe (Nathaniel) third, ahead of Group 1 winners The Revenant (Dubawi) and Mother Earth (Zoffany).

Baaeed, who did not race at two, is expected to remain in training next year.

Won four on end, including three at Group 1 level, before his neck second to Baaeed and must logically be rated immediately below him. Retired to Dalham Hall Stud for 2022.

The British, Irish and French-centric world rankings still tend to underestimate the Japanese. Without a great deal of prompting I could easily promote Efforia, Contrail and Gran Alegria to the top three spots on this list with honourable mentions to Shahryar (Deep Impact), who nosed our Efforia in the Japanese Derby; Authority (Orfevre) and Schnell Meister (Kingman).

Hishi Iguazu (Heart’s Cry), beaten four and three-quarter lengths behind Efforia in the Tenno Sho (albeit with a tough run from gate 15), was beaten a short head behind compatriot Loves Only You (Deep Impact) in last Sunday’s Group 1 Hong Kong Cup with British challenger Dubai Honour a length and a half astern and his form, via Sealiway, ties in with St Mark’s Basilica and the Arc winner Torquator Tassor (Alderflug).

Runner-up to the champion Almond Eye (Lord Kanaloa) in last year’s Japan Cup, he returned late this year (after an early season glitch) to beat all bar Efforia in the Tenno Sho and then claim the Japan Cup authoritatively before his departure to Shadai Stallion Station.

World champion female “miler” with five Group 1 wins at the distance (including last year’s Yasuda Kinen over Almond Eye) and won this year’s Mile Championship in commanding fashion after her placing in the Tenno Sho which proved such an outstanding form race.

The wildcard inclusion. Yet to win a Group 1 but it’s only a matter of time. Unbeaten in four runs on turf since his “escape” from Dubai. Graduated from arguably the most emphatic win ever seen in a Royal Hunt Cup to Group 2 and 3 wins over Group 1 winners.

Won 19 of 20 starts and now 16 on end. The Australian–bred beat a field which included four overseas Group 1 winners in last weekend’s Hong Kong Mile to refute any argument that his record is such as he’s been confined to the Hong Kong bubble.

Another inclusion who might raise eyebrows and I’ll concede there’s an element of potential assessed with actual performance here. However he is unbeaten in four starts on good ground since being gelded. In a year where I believe the Epsom and Irish Derby form was suspect (not to mention, to some degree, the Arc on heavy ground), he might be the one who goes on to say he was the best of this year’s three-year-old staying crop.

Godolphin’s unbeaten two-year-old who rounded out the year with decisive wins at Group 1 level in the Vincent O’Brien National Stakes and the Dewhurst Stakes.