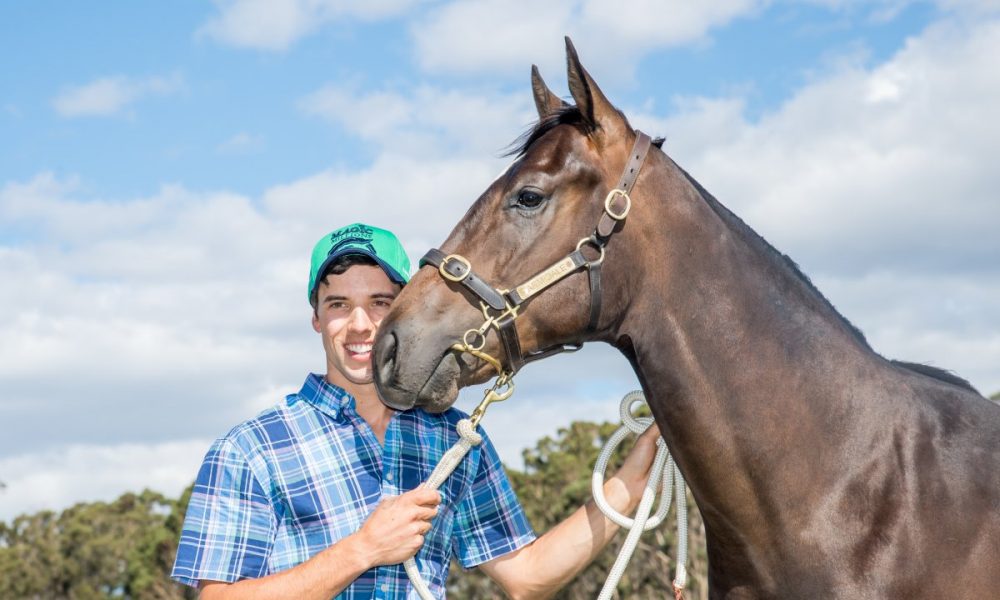 Trainer Cameron Thompson yesterday fended off a powerful band of mainland buyers who dominated the top-end of the Magic Millions Tasmanian Yearling Sale to keep an impressive $150,000 son of Darley’s first season sire Impending (Lonhro) in his home state.

The highest-priced lot sold at Quercus Park in Carrick, one of six six-figure yearlings in a record-breaking Tasmanian auction, was a clear indication that the demand for bloodstock in 2021 had reached the island state, with the afternoon session smashing all previous measures.

There were no six-figure yearlings sold in 2020 and, more importantly, the average of $35,872 was up 17 per cent, while the median of $29,000 increased from $26,000 last year, figures which observers suggest will provide a boost to local breeders and give them the motivation to reinvest in young broodmares.

The aggregate of $3,372,000 was also up slightly on last year, despite 21 fewer horses being offered.

Cressy-based Thompson zeroed in on the colt during on-farm inspections a fortnight ago and, along with the support of some new clients, was able to land the standout yearling.

“He is a cracking type, a real early type, from a deep-pedigreed family who has performed on the track, which is good to see,” Thompson told ANZ Bloodstock News.

“We love the hot new sire in Impending, being a son of Lonhro, and it is a good combination.

“I thought he would make at least $100,000 and, not being by a local stallion, he had to go close to topping the sale, but I didn’t think he’d make the money he did.

“The sale was so strong today that it really put a cream on top of the horses and that was evident on the lesser ones. It’s really good for the breeding industry.”

Consigned by Armidale Stud on behalf of breeders Ken and Jen Breese, the colt is the first foal out of Snitzel (Redoute’s Choice) mare Dream Food, a three-quarter sister to the Matthew Dunn-trained stakes winner Snitz and a half-brother to the Group 2 winner, Group 1-placed mare I’ll Have A Bit (Smart Missile). His third dam is the Group 2-winning Tickle My (Perugino). He was catalogued as Lot 104.

“He was a lovely type, by the right stallion, out of a super family. Ken and Jen have been wonderful supporters of ours, and it was great to get a result for them,” Armidale Stud’s David Whishaw said.

“It is great to see Cameron Thompson, a young local trainer with some big owners behind him, it’s great they are investing in him and giving him some quality stock.”

Vandyke makes most of opportunity from afar

When David Vandyke ventured to trackwork early yesterday morning, buying a horse was the furthest thing from his mind, but only a matter of hours later, the prominent Queensland trainer had the second highest-priced lot sold at the sale in his possession.

The Group 1-winning Sunshine Coast-based trainer was yesterday alerted to the fact that the sister to his promising mare Cotton Fields (Deep Field), a last-start Doomben winner, was going through the Tassie ring and, after some due diligence, the filly is heading his way with a $120,000 price tag.

“I have got David Chester to thank for that,” Vandyke, who was bidding online, revealed to ANZ Bloodstock News yesterday.

“He rang me up and alerted me that she was in and Cotton Fields is a lovely, scopey type of mare who I have had a good opinion of.

“It’s a lovely family, it’s versatile, there’s good depth to it and my spies down there told me she was a lovely type. She is certainly worth giving a go.

“The fact that she’s Magic Millions (Race Series eligible) and that I know the full-sister well, she will be an easy sell. I am delighted to get her at that price and I can’t wait to see her in the flesh.”

By the same sire as Saturday’s exciting three-year-old Oakleigh Plate (Gr 1, 1100m) winner Portland Sky – Deep Field’s (Northern Meteor) first at the highest level – the yearling is also a sister to last week’s Ballina maiden winner Medusa’s Fury. She is the fifth foal out of the unraced Medusa (Stratum), herself a half-sister to Perth Listed winner View The Stars (Galileo) and the stakes-placed sire Olympus (Danehill). Offered by Alva Stud, she was catalogued as Lot 5.

Les Bridge trains an unraced two-year-old three-quarter brother to the $120,000 filly, while Medusa also has an Alpine Eagle (High Chaparral) filly at foot.

Alva Stud’s Catherine Hills was hopeful of a big result given she rates her as “one of the best fillies I have ever brought here”.

“She was a lovely filly, all her x-rays were good. Her scopes were good and Deep Field is going really well at the moment. I was hoping she would do quite well,” Hills said.

“Sometimes things work out perfectly in terms of timing, and the sister shows there has been proven success with Deep Field as well, which meant she had a lot of going for her.”

Vandyke plans to continue his patience with the lightly raced Cotton Fields, who has won twice from five starts, and he is already looking ahead to next season with the mare.

“She will have one more run and then go to the paddock,” he said.

“I know she is four, but she is a scopey type and she is just going to get better with time. Most of these female horses should be racing (well) at five.”

Vandyke has been selective so far this sales season, with yesterday’s addition his third yearling in 2021.

“You have got to pick your mark. Overall, they are expensive but I think if you are diligent you can certainly get a bargain,” he said.

“I bought a Savabeel for $250,000 at the Magic Millions and she is a beautiful filly and I got a Pierro filly for $150,000. Taking those two into this filly, I think I have shopped well thus far.

“I had none on the shopping list in Tassie until a couple of hours ago, but you’ve got to keep your phone on and your mind open.”

Later in the session there were back-to-back six-figure lots with an Alpine Eagle colt, the third foal out of well-performed Tasmanian stakes-winning mare Testamarriage (Testa Rossa), bought by well-known agent John Foote, with the assistance of Merrick Staunton, for $110,000 before a Lonhro (Octagonal) filly with a strong pedigree made $100,000.

The Alpine Eagle colt, catalogued as Lot 68, was offered by Armidale Stud, while the Grenville Stud-consigned filly was bought by Victorian trainers Robbie Griffiths and Mat de Kock in conjunction with agent Peter Ford. She was catalogued as Lot 69.

Bred by Graeme and Bart McCulloch, who also bred Group 1 winner Mongolian Khan (Holy Roman Emperor), the colt is the third foal out of two-time winner Benoit (Domesday), a half-sister to New Zealand Group 1 winner Ekstreme (Ekraar) and the stakes-placed Maradona (Mr Nanaho) and Pellegrini (Mr Nanaho). He was catalogued as Lot 87.

The McCullochs later sold another son of Zululand – the half-brother to boom Tasmamian two-year-old Turk Warrior (Outreach) – for $100,000 to Lindsay Park, who were bidding online. Catalogued as Lot 106, the colt is the sixth foal out of Tasmania dual Listed winner Ehor (Val Royal), herself a half-sister to the stakes-placed Party Crasher (Jade Robbery).

Yesterday’s sale was the first staged at Quercus Park in Carrick, near Launceston, and the results, Magic Millions Victoria and Tasmania manager Tim Brown says, will provide an impetus for local breeders to raise the bar in terms of quality in the years to come.

Brown would have taken the results achieved yesterday if they were put to him three months ago.

“That is a great result at the top end. Some of the lesser horses were hard (to move) as they have been in other sales, but on the whole, considering Tasmania had that three-month hiatus from racing last year, I think the trainers and the local buyers have come back extremely strongly.

“There’s an impetus now at the top end and I do believe that more people are going to follow that better end of the market and reduce the number of average mares and move on with producing more commercial stock.”

Queensland-based agent Foote, who went to Tasmania last week to inspect yearlings before returning to the mainland in preparation for the Inglis Melbourne Premier Yearling Sale, was the leading buyer with eight lots for various clients. Interstate buyers bought 47 yearlings while two were also sold to Hong Kong clients.