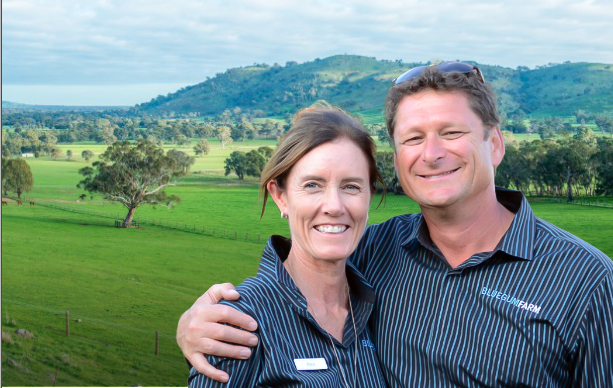 Blue Gum Farm, Victoria’s longest-running family–owned thoroughbred stud, has been sold to burgeoning racing and breeding venture Trilogy by Philip and Patti Campbell after more than four decades of successfully running the Euroa property, the nursery of a host of star racehorses.

Home to champion and successful stallions such as Encosta De Lago (Fairy King), Noalcoholic (Nonoalco), Rubiton (Century), Umatilla (Miswaki) and Rancho Ruler (Rancher), as well as producing a long list of racetrack stars including the likes of Alinghi (Encosta De Lago), Umrum (Umatilla) and Fontiton (Turffontein) under the stewardship of the Campbells, they have made the shock decision to accept an offer for the prized Blue Gum Farm business and land.

Trilogy Racing was established last year by NSW Central Coast entrepreneurs Jason and Mel Stenning and Victoria-based Sean and Cathy Dingwall, both experienced horse people who have been trading under Caithness Breeding.

The Blue Gum Farm property and business was purchased under the banner of Trilogy Rural Investments Pty Ltd.

“As far as history in this state is concerned, there isn’t a [thoroughbred] farm that comes within a bull’s roar of Blue Gum for continual operation,” Philip Campbell told ANZ Bloodstock News.

“We’ve been going here at Euroa as Blue Gum Farm for the last 42 years. I know it’s not Widden-like numbers, but as far as Victoria is concerned, there is a lot of history here and history is something that is very important to us.

“We’ve got all the influential stallions who have stood here over the years. Their name plates are up in the stallion barn and some of them are buried here and we’ve got their headstones around the stallion parade ring. 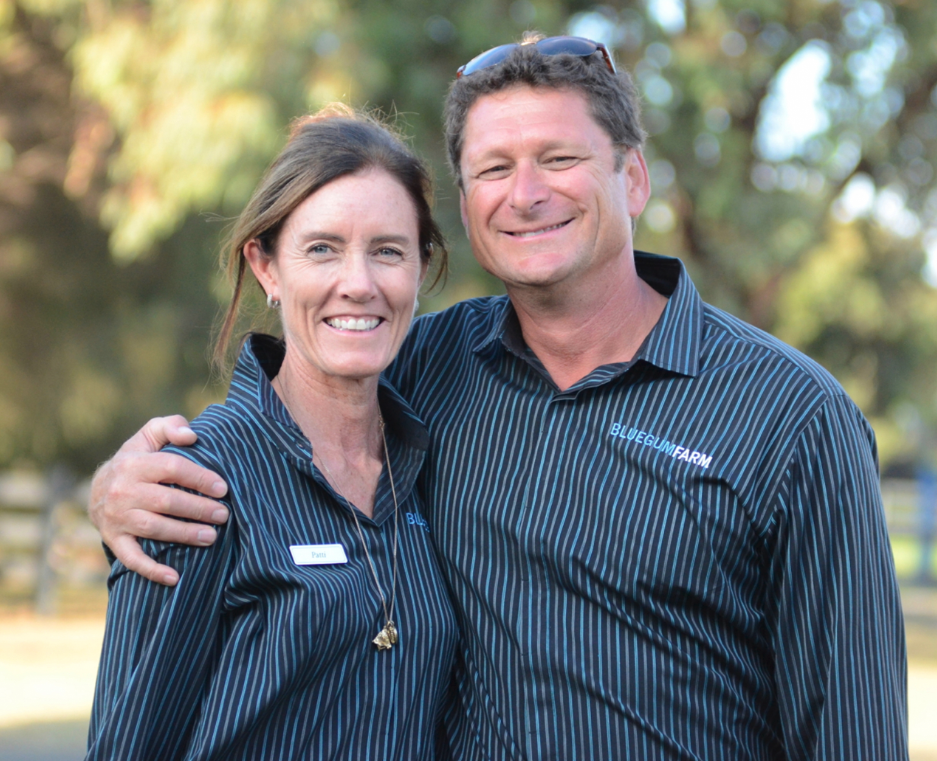 “Our yearling sale graduate honour roll is something that we are also very, very proud of and it is something that continues to grow with stakes-winning graduates. Because of that, and a lot of other reasons, it was no easy decision [to sell], that’s for sure.”

The walk-in, walk-out deal will be complete on December 1 with Campbell expected to stay on in a consulting capacity to help oversee the preparation of young stock heading to the 2023 Inglis Melbourne Premier Yearling Sale where Blue Gum Farm has been the leading vendor four times in the past eight years.

The Peter Moody–trained three-year-old Nanagui (Sebring), among the $34 million worth of yearlings sold at Inglis’ Premier Yearling Sale in the past eight years by the Campbells, added her name to the Blue Gum graduate record by winning the Cap D’Antibes (Listed, 1100m) at Flemington a fortnight ago.

“Part of our plan was to have a property and when we sat down and looked at it we wanted to buy the best property in Victoria because we’re passionate about the Victorian breeding industry and, in our view, Blue Gum is the best farm,” Sean Dingwall said yesterday.

“It’s probably produced the most Group 1 winners, it’s in the right location for us and, obviously, it was a property that has a great history and a great management structure, so we were very keen to talk to them [about buying it].”

Importantly, the Blue Gum staff, who were addressed by Campbell and the Trilogy team on Wednesday, will be retained under the farm’s new ownership structure, while the farm will also continue to be a commercial operation which services outside clients.

Dingwall has immense respect for the Campbells and he sees it as an honour to become a co-owner of the fertile 800-acre Blue Gum Farm.

“There are no better operators and they’ve done an amazing job, so their choice to retire is opportune for us and I am sure that the process that was undertaken and the angst that they would have had selling their ‘life’s work’ would have been quite difficult,” said Dingwall, who will relocate with his wife Cathy to live at Blue Gum Farm later this year.

“We’re very conscious of the history and of the duty we have to maintain the property’s image.”

He also saw it as his duty to continue the farm’s legacy by remaining a strong supporter of the Victorian breeding industry and the state’s Inglis-conducted yearling sales where the Blue Gum Farm name will remain as a vendor. 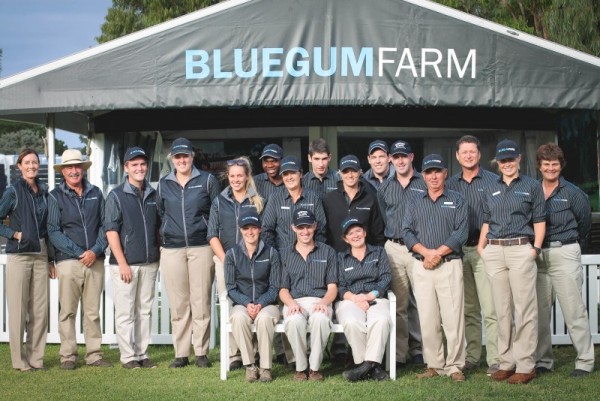 “Blue Gum historically has sold their full draft through Melbourne and we will certainly honour current clients and obviously Philip is maintaining an involvement,” Dingwall said.

“Philip and I will basically pick the drafts [for 2023] based on making sure we give current clients every opportunity and the Trilogy yearlings will work around that and we’ll go from there.

“Again, as part of our support of the Victorian industry, we want to be seen to be putting our best through Victoria unless the bloodstock companies suggest there is a horse who is spot on for another suitable sale. We’ll be reliant on them to a degree for that advice.”

Trilogy, which has been a big player at the weanling, yearling and broodmare sales over the past 16 months and has interests in upwards of 200 horses, has been agisting mares and young stock at Blue Gum Farm in recent times and a level of interest was shown by the quartet after inspecting yearlings at the Campbells’ property ahead of this year’s Premier sale at Oaklands Junction.

“We were actually discussing a scenario whereby they became financially involved in the business, but they also had shown a lot of interest in buying the farm,” Campbell revealed.

“One thing has led to another and Patti and I have sized it all up. The important thing for us is that they are very, very keen to retain all the wonderful staff that work on our farm as they’ve been responsible for the results we’ve been able to achieve as much as anyone and it was important to us that there was staff retention and that they were looked after going forward.

“That was a big positive for Patti and I in making the decision, I can promise you.”

Campbell added that the Trilogy team’s “enthusiasm and excitement was infectious”.

“I have known Sean and Cathy for a long time. They used to walk mares into Encosta De Lago back in the day. I haven’t necessarily known them well, but I got to know them a lot better again just recently and getting to know Jason and Mel has been a lot of fun,” he said.

“They’re just really nice, down-to-earth people who are easy to communicate with. They enjoy the successes, they cop the lows and they are very, very aware of how the industry works with the good and the bad … so we feel like the farm’s in really good hands going forward … and everyone will continue to navigate the ship in the right direction.”

Jason Stenning said: “If I take myself out of the picture and look into the picture for a second, that respect Sean and Cathy have got for Philip and Patti is reciprocated back to Sean and Cathy as well. Watching the way everybody’s been respectful and worked through this transaction, it is pretty special.

“I’ve performed lots of acquisitions and transactions through other businesses and this, by far, is the most amicable, respectful, comfortable and I think the fact that Philip and Patti chose Sean and Cathy and to a lesser extent Mel and myself as well, I think that’s important too because I honestly don’t think they would have felt comfortable selling it to anyone else.

“Their belief that Sean and Cathy will maintain it the way that it needs to be done is really strong.”

A member of the Newgate-China Horse Club colts partnership and a shareholder in Golden Rose Stakes (Gr 1, 1400m) winner In The Congo (Snitzel), Trilogy did not rule out Blue Gum Farm returning to standing stallions in the future.

“Nothing’s off the table, but obviously standing stallions is a difficult game. Finding a stallion who you want to stand is the hard part,” Dingwall said.

“We’ve obviously purchased a number of colts that are now two-year-olds. If we were fortunate enough to get one that can run, certainly we will [stand them at Blue Gum Farm].”

What the future holds for the Campbells, they aren’t quite sure, but they intend to retain a small band of quality broodmares which will remain at Blue Gum Farm. Visiting Patti’s family in the United States next year is also on the agenda.

“I haven’t got an answer for that [our future] other than we’re taking a breath and reassessing and working out what the next chapter looks like,” Campbell said.

“We’re scaling back [our broodmares] because we weren’t obviously standing stallions here any more, which means that we’ve got to pay for all the services that we utilise.

“Two of our mares are going to Snitzel and one of them is going to Zoustar, so the money soon gets gobbled up, but we will continue to work with those mares and hopefully race a couple and sell a couple going forward.”