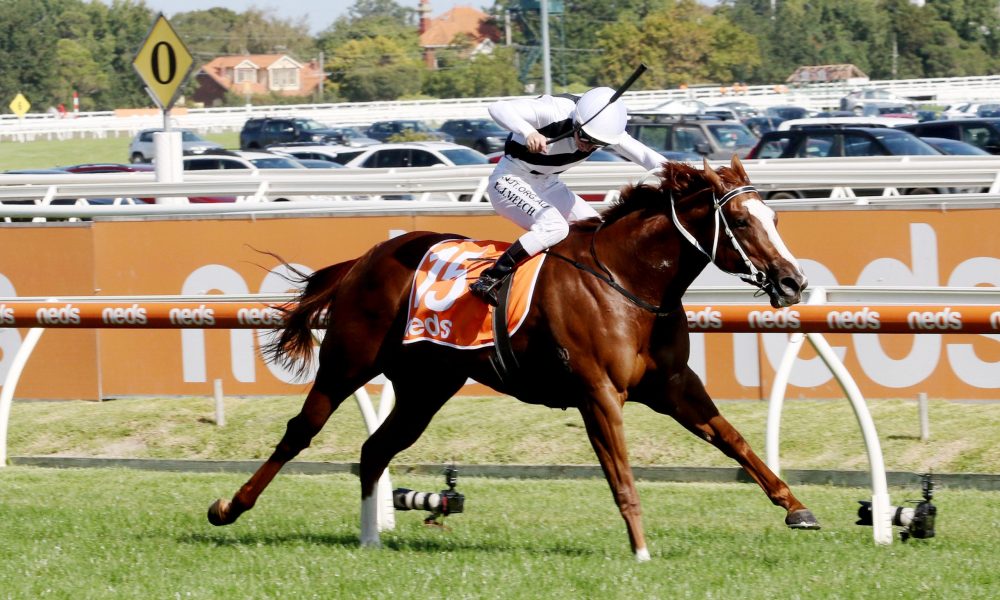 Lightly-raced, but talented, mare Pippie (Written Tycoon) produced a stunning performance in taking out Saturday’s Oakleigh Plate (Gr 1, 1100m), only failing by the barest of margins to break the 10-year-old track record at Caulfield.

After beginning brilliantly from barrier 14, Pippie crossed to the front in a twinkling. She  continued at a fast tempo before holding on to score in a time of 1:01.93, which was just 0.2 seconds outside of Here De Angels’ (Dehere) record, set in winning the Rubiton Stakes (Gr 3, 1100m) in 2010.

Having her first run since November and only her ninth race start, Pippie travelled particularly well, had a clear advantage at the 200 metres and then held on to score by half a length from Zoutori (Zoustar), with Crystal Dreamer (Stratum) three-quarters of a length further back in third.

And while the aforementioned facts show what a marvellous performance Pippie staged, there was considerable comment about a perceived leaders’ bias at Caulfield, and those subscribing to that line of thought would therefore be reluctant to give her the credit she deserves.

So it should be highlighted that the runners that raced closest to the front-running Pippie finished near the tail of the field, with the best of those being Bon’s Away (Bon Hoffa), who was fourth at the home turn before finishing ninth.

While the runner-up Zoutori came from 13th at the home turn, third-placed Crystal Dreamer was eighth at that point, fourth-placed All Too Royal (All Too Hard) was ninth, fifth-placed Vainstream (Bel Esprit) was seventh, sixth-placed Bivouac (Exceed And Excel) was tenth, seventh-placed Halvorsen (Magnus) was 18th and eighth-placed Bold Star (Needs Further) was 14th.

Of those runners, some of the most interesting closing sectionals were:

The Blue Diamond Stakes (Gr 1, 1200m) was also a strongly-run race and while he was a surprise winner at odds of $26, Tagaloa (Lord Kanaloa) staged a very smart performance in winning in a time of 1:08.56, which was 0.82 outside of the track record.

Despite working most of the way, Tagaloa went to the front on turning for home and then fought back courageously to hold off the favourite Hanseatic (Street Boss) and score by a head. Personal (Fastnet Rock) was a further three-quarters of a length away third.

Hanseatic, who was beaten for the first time in three starts, was seventh on the rails early on, looked the winner when he eased into clear running at the 200 metres and clocked 55.72 for his last 1000 metres in chasing the fast tempo.

Personal raced just behind Hanseatic and ran on well, clocking 55.59 for her last 1000 metres in a smart effort at only her third race start.

In addition, On The Watch was taken by the effort of the Magic Millions 2YO Classic (RL, 1200m) winner Away Game (Snitzel), who had a difficult wide trip close to the fast pace, making her (1.3 lengths) fourth a smart performance indeed.

The Futurity Stakes (Gr 1, 1400m) went to the consistent gelding Streets Of Avalon (Magnus), who broke through at the highest level in another solidly-run race, albeit not at the hectic tempo of the previous two Group 1 features.

Supported from odds of $16 to start at $9.50, Streets Of Avalon showed his customary pace to lead and then maintained quite a good tempo before fighting back gamely to defeat the favourite Super Seth (Dundeel) by a long-head.

In addition to those fast times, jockey Mark Zahra conceded after the race that Super Seth is probably better suited when held up behind runners rather than working outside the leader, a position he found himself in due to the circumstances of the race.

Multiple Group 1-winning mare Melody Belle (Commands) was third, just over two lengths behind Super Seth. She raced a bit below her brilliant best at her first run since November, but connections said there was improvement to come.