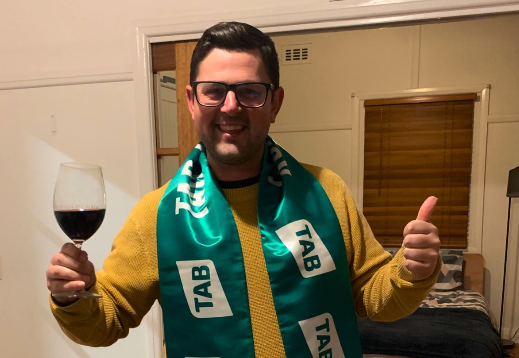 Mitch Beer, aka the Twitter trainer, concedes most people advised him against his move from Mornington – on the beautiful peninsula on Melbourne’s door-stop – to the border town of Albury which he undertook just less than two years ago.

“Lot of people thought I was nuts,” Beer told ANZ Bloodstock News yesterday as he returned from inspecting – in Sydney – the Godolphin draft currently being offered on the Inglis on-line platform.

He may well have wondered, earlier this year, if they were right as bushfires threatened border townships forcing his stable to close for two weeks and that immediately before the onset of Covid-19 which has prevented his staff from travelling to Victoria – even the 12 kilometres from his on-course base at the Albury racecourse to the Wodonga track; the twin cities separated by the Murray River and separated into different states.

However, a 20 per cent strike rate since mid-May – with winners including Princess Cordelia (Bel Esprit) at Randwick last Saturday and debut successes with colts by Brazen Beau and Written Tycoon – has expunged any doubts even if Beer describes 2020 on the border as “nothing short of horrendous”.

In truth, Beer had very few misgivings about the move and certainly has no regrets.

“Mornington’s expensive. I could have stayed there and probably been renting for the rest of my life and all the time while there, you’re hearing constant announcements from Racing New South Wales pumping up country and provincial racing. I thought ‘what the hell am I staying here for’.

“Maybe 15 to 20 years ago, you couldn’t have hoped to get nice horses to train if you weren’t at Flemington or Caulfield or Randwick but that’s changed plus the facilities here (Albury) are great and it’s less frantic. We start at 6.30 am. At Mornington, I was a 29 year-old behaving like a grumpy 70 year-old and falling asleep at 7.30 every night.

“I can have a life here. Go to bed at midnight and still get six hours sleep,” he said.

Beer is probably as well known for his Twitter account as he is for training – which is not to denigrate his training skills, rather it reflects the usually humorous nature of his Twitter observations which has a strong following and, in fact, aided in growing his ownership base.

“Twitter’s definitely helped because, I think, I haven’t tried to use it as a marketing tool. It’s just been fun and people have recognised that and come on board. We may not have sheikhs or massive breeders as owners but we have plenty of mums and dads and tradies and cricket club members.

“People who want to be involved without spending a huge amount of money and for many of them it’s the experience, it doesn’t matter whether it’s Corowa or Caulfield,” he said.

Beer draped himself in a TAB sash and posted the photo, captioned ‘can’t we talk corporate sponsorship@glennmunsieTAB?’ after Princess Cordelia’s win in the TAB–sponsored Highway. Munsie hasn’t come back to him. “But I haven’t given up hope,” Beer said.

The whole online experience has altered the face of racing according to Beer. “You can now deliver an excellent product, training a racehorse from just about anywhere. These days you get fantastic coverage of even the lesser meetings from Sky Thoroughbred Central and Racing.Com.

“Obviously people haven’t been able to go racing of late and fewer tend to go in any case but they’re still connected via the TV coverage. Fewer people come to stable opens these days but they want to be serviced by emails and videos. We send a two minute edited video of every horse once a fortnight.

“And I’m finding that many people would rather come to Albury to see their horse race and make a weekend of it, than battle the city traffic to go to a Pakenham or Cranbourne night meeting,” he said.

The NSW focus on Country Championship races and the TAB Highways, restricted to trainers licensed and operating from one of eight designated country racing regions in NSW or the ACT, plus the support of Victorian owners and breeders Steve and Sally Watkins have been significant to Beer’s success.

Princess Cordelia has now claimed two TAB Highways and won about $100,000 this season – a lucrative return for a horse rated 65 and secured by Beer for just $36,000 at Melbourne Premier from the Swettenham Stud draft.

“I don’t know why I didn’t sack her after her first few starts but she’s kept improving and more than paid her way. These Highway races were part of the reason I moved to Albury. They’re such a target, such an incentive at a time when the big stables are getting bigger and bigger. It’s rare to see a country trainer winning city races on a Wednesday or a Saturday these days.

“When the phone rings now with someone wanting to send a horse or get involved with one, the conversation always comes around to whether it could run in one of those Highways,” said Beer who also, in February, won the $150,000 Albury heat of the Country Championships with Sky Call (Domesday) for the Watkins’.

More recently, Beer won the keenly sought Jack Maher Classic at Wodonga with debutant Branders Rule; the half–brother to Sky Call by Brazen Beau (I Am Invincible) and, 12 days later, produced another newcomer Matsumoto (Written Tycoon) to win at $61 at Wangaratta – both owned by Steve Watkins who trained 250/1 chance Abaridy (Arbogast) to win the 1986 Caulfield Guineas.

“Steve’s been a great supporter of the stable and stuck despite the fact that we had a lot more bad luck than good at the start. It’s humbling really to get these very nice horse from a man who’s a Group 1–winning trainer himself. I met him through Sally as we spell horses at her Willaroon Park property which is about an hour from us,” he said.

Branders Rule won the Maher Classic decisively and may be destined for better things according to the trainer. “He did a good job given we don’t have the same number of jump-outs or races for two-year-olds up here. He’s gone to the paddock and hopefully improves further with a bit of time,” Beer said.

Matsumoto drifted from $21 to $61 before his debut win, despite having won a public trial. “It was a very hot race. I expected him to run well, not necessarily to win but to be flying home to run third or fourth,” Beer said.

“So you didn’t back him?”, I asked. “Well, you always have to have a couple of dollars, don’t you, just in case?” Beer replied.

Fly home he did to win by a length and a quarter from the US-bred newcomer and co-favourite American Whiskey (Declaration Of War).

Under coronavirus restrictions, Beer’s Victorian runners have to be in the neighbouring state by 9am the day before the meeting and without New South Wales–based staff. It’s also meant that Beer has had a number of staff living with him in Albury.

“It’s been a tricky situation but fortunately we’ve been able to keep all our staff. Nobody’s been laid off and in terms of transporting the horses, we’ve sent them to Dan McCarthy at Wangaratta and vice versa when he’s had runners in New South Wales,” he said.

Beer will soon move to new stables, still on course. “By the end of the year, we will be able to accommodate 60 horses in on-course stabling which will be great. The Club here is really having a crack and I think there’s the potential for this to be a real growth area for training,” he said.

In the meantime, he’ll be focused on the Godolphin cull. “Not surprisingly, there’s a lot of nice horses there. I’d be hoping to find a Country Championships type. They may not be cheap but you are buying a horse with a full veterinary history from the time it was a foal.

“You can buy a car for $5000 on Gumtree or spend a little more and get an ex-demo model, with a full service history, from a reputable dealer. That’s the way I’m looking at it,” he said.