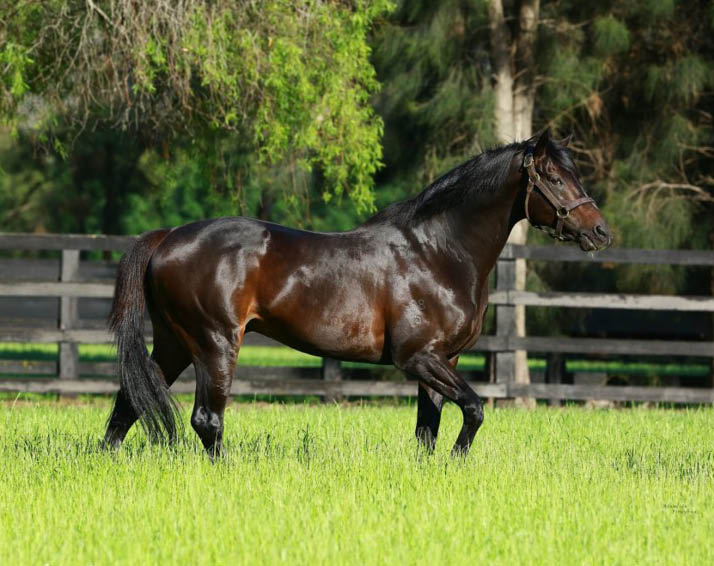 There remains another 16 weeks of the Australian racing season. A season which includes riches to be won at the remainder of the Sydney autumn carnival, the Adelaide May carnival, then onto the Brisbane winter carnival. Therefore, the contenders for this year’s Sire Premiership will likely swap the odd place. However, the jump, in one day, from fifth in the rankings right to the top by New Zealand-bred sire So You Think (High Chaparral) is spectacular.

Three successive Group 1s and $4 million within the space of 80 minutes would have been unthinkable at the start of the day.

Irish import Knights Order gave the till a first shake with $1,160,000. His all-the-way victory in the Sydney Cup (Gr 1, 3200m) was followed immediately by the upset victory for Think It Over in the day’s big prize, the Queen Elizabeth Stakes (Gr 1, 2000m). Aided by a brilliant and intelligent ride from Nash Rawiller, the coffers were swelled by a cool $2,300,000.

Forty minutes later Nimalee chimed in with an additional $580,000, ploughing through the heavy Randwick track on her way to victory in the Queen of the Turf Stakes (Gr 1, 1600m).

A bonus of $114,200 also found its way into the day’s haul when Think ‘N’ Fly and Siesta Key duly won at Caulfield and Doomben, making a grand total of $4.154 million for the day. That’s how to jump from fifth to the top.

So you think the Coolmore boys are smiling? They should be.

So, too, no doubt, is Mandy Gunn of Motree Thoroughbreds in Tasmania, who secured So You Think’s Australian Derby (Gr 1, 2400m) winner Quick Thinker to be her foundation stallion. The entire was originally passed in at the Inglis Digital Sale last week but a deal was done for $380,000. As they say, timing is everything.

Including Zabeel into the discussion is highly appropriate, because he is the only Kiwi-bred stallion in modern times (since 1946) to land the Aussie title. Plus, he is the damsire of both Think It Over and Nimalee. Consequently, he jumped from fifth to third on the current leading Australian broodmare sires List.

Zabeel’s daughters have kept him squarely in the limelight over the last dozen years, which includes his three successive broodmare sire championships (2012 through 2014), plus he has been runner-up four times and third twice.

Khorassan (Big Game), sire of the freak Tulloch, achieved the honour in 1958, while the great Galilee was responsible for the first of two premierships by Alcimedes (Alycidon).

Te Parae Stud sire Agricola (Precipitation) claimed the 1968 title via the deeds of his wonderful filly Lowland and, courtesy of Dayana and four Derbies, Te Parae’s Oncidium (Alcide) topped the list in 1973 and again two years later, due mainly to the exploits of his fabulous daughter Leilani.

Sir Tristram (Sir Ivor) dominated proceedings throughout the eighties, landing six titles within the space of eight years including three in row, a sequence broken by Zamazaan (Exbury).

Of the above, only Zabeel can claim the NZ suffix. For a New Zealand-bred sire to become champion Australian sire is an entirely different matter and for So You Think to reach that pinnacle would be quite the achievement.

So You Think, a dark bay or brown November 10 foal, spent his early days roaming the rolling paddocks of Mapperley Stud in Matamata. Catalogued as Lot 424 in the Windsor Park draft, he was one of 21 lots by High Chaparral (Sadler’s Wells) to be sold at the 2008 Karaka Premier Sale. His $110,000 purchase, by Bart Cummings on behalf of DGR Thoroughbred Services of NSW, was bettered by 13 other lots by the same sire.

At the time of his sale, So You Think was his dam’s seventh foal. Triassic (Tights) was a good performer, having captured the Sir Tristram Fillies Classic (Gr 2, 2000m) as well as the Soliloquy Stakes (Listed, 1400m). Ultimately, she would foal nine winners from ten to race and was twice honoured as the New Zealand Broodmare of the Year, in 2011 and 2012.

Triassic’s dam, Astral Row (Long Row), won six including two at Riccarton and racked up a frustrating four second placings in Listed company without breaking through to stakes-winning status. She produced three winners from four foals.

So You Think’s third dam, Pak Bun Bay (Matinee Idol), did her racing in Western Australia, winning five and just missed out on black type when finishing fourth in the Western Australian Oaks (Gr 3, 2400m).

His fourth dam, Philipolo (Marco Polo II) was bred in New Zealand but raced twice in Australia without success and at stud produced six winners. She was a half-sister to two stakes winners as well as to Philimedes (Alcimedes), the dam of Perth Cup (Gr 1, 3200m) victor Philomel (Zamazaan), and of Oakleigh Plate (Gr 1, 1100m) winner Turf Ruler (Ruler).

So You Think made his debut as a late two-year-old and won a Rosehill 1400-metre race in May. Typical of Cummings’ acumen, the colt was put aside until September, finishing second in the Ming Dynasty Handicap (Listed, 1400m). Two weeks later he notched up his first stakes win, taking out the Gloaming Stakes (Gr 3, 1800m) at Rosehill.

Then, it was down to Melbourne where he ran into a hot Starspangledbanner (Choisir), who led all the way in the Caulfield Guineas (Gr 1, 1600m). However, So You Think’s fifth caught the eye of the Moonee Valley officials and he was granted a start in the Cox Plate (Gr 1, 2040) and, similar to Starspangledbanner, led all the way for a brilliant victory, by two and half lengths over Manhattan Rain (Encosta De Lago) and Zipping (Danehill). A star had arrived.

In his second Cox Plate he again defeated Zipping, while third was the brilliant Whobegotyou (Street Cry).

His class saw him run third in the 2010 Melbourne Cup but soon after the entire was sold, for a reported $25 million, to Coolmore.

For Cummings it was a tragedy. He likened the sale to that of Phar Lap (Night Raid) in 1932 and stated that the best of So You Think had yet to be seen, adding that he was possibly the best that the great man had ever trained. Towards the end of his amazing career, Cummings declared that So You Think deserved to be ranked alongside Galilee and Saintly (Sky Chase).

Sent to Aidan O’Brien in Ireland, So You Think appeared the following May, bolting in by 12 lengths in the Mooresbridge Stakes (Gr 3, 10f). Three weeks later, he snared his sixth Group 1, by four and half lengths, in the Tattersall’s Gold Cup (Gr 1, 10.5f).

At Royal Ascot, in the Prince of Wales’s Stakes (Gr 1, 10f), he was nutted but bounced back at his next start to claim the time-honoured Eclipse Stakes (Gr.1, 10f) at Sandown.

In his final race of 2011 and his only start on dirt, he finished a creditable sixth in the Breeders’ Cup Classic (Gr 1, 10f) at Churchill Downs, about three lengths behind the winner Drosselmeyer (Distorted Humor).

In three starts in 2012 So You Think returned to The Curragh for his second Tattersall’s Gold Cup and wrapped up his career with an avenging victory in the Prince of Wales’s Stakes at Royal Ascot.

In 23 starts, So You Think won 14 including ten at the elite Group 1 level, a Group 2 and two Group 3s. He started 18 times in Group 1 races for ten wins, three seconds, one third, two fourths, a fifth and a sixth (on dirt) earning the equivalent of $A8.89 million.

The stallion’s unreal Saturday brought his tally of Group 1 winners to nine, while his stakes winners total 38, with a further 31 stakes-placegetters.

Whether he remains at the head of the premiership by July 31 is yet to be determined but his rise over the last few years has been significant. He was into the top fifty with just two crops, among the top twenty in 2018 (13th), 2019 (15th) and 2020 (11th), then fifth last year. The trajectory is clear.

High Chaparral is revered in the southern hemisphere and his sons are proving their worth too. His grandsons may well prove just as popular and successful.

For the first time in many weeks, Kiwi-breds missed out on claiming a win, or wins, in the 14 Australian stakes races run on Saturday. However, as mentioned above, Think It Over and Nimalee are both from Zabeel mares, albeit mares that foaled in Australia.

The Australian Oaks (Gr 1, 2400m) victress, El Patroness (Shamus Award), is from a New Zealand-bred mare in Sure You Can, a daughter of O’Reilly (Last Tycoon).

Apart from her a disappointing eighth at Moonee Valley in the Alister Clark Stakes (Gr 2, 2040m), leading into the Oaks, El Patroness had shown worthwhile staying form this preparation.

She broke her maiden at start three in the Super Impose Stakes (Listed, 1800m) last October at Flemington then finished second in the Caulfield Classic (Gr 3, 2000m) and had one more start before being put aside until this autumn.

A fresh-up third over 1400 metres at Caulfield preceded another third in the Autumn Classic (Gr 2, 1800m). After her effort at Moonee Valley it was discovered that the filly had a cut to her near foreleg.

At Randwick she was always handy, hit the front upon straightening and then held off all challenges to score by two and half lengths.

She is the first foal of Sure You Can (O’Reilly), twice a winner at Flemington. Sure You Can’s sister, Betwixt (O’Reilly), beat the boys in the Tasmanian Derby (Gr 3, 2200m) and has since produced Queensland Oaks (Gr 1, 2400m) winner Provocative (Zabeel).

The next dam, Not Sure (Masterclass), won five and is a half-sister to South African Graded winner Taupo Retreat (Centaine), while Not Sure’s dam Icelette (Icelandic) won eight including two Listed races at Awapuni.

Both stakes winners at Riccarton on Saturday may be headed for Queensland, according to their respective trainers.

Reputabelle (Pins) is in super form, having bolted away with the NZB Airfreight Stakes (Listed, 1400m) a month ago and backed that up with a much different performance in the NZB Insurance Stakes (Listed, 1600m).

Second looked to be her lot when Unusual Countess (Unusual Suspect) kicked clear in the straight but Reputabelle kept gaining with every stride. Then, in a good tussle, she took over for the last 50 metres to make it four wins in succession.

Reputabelle’s trainer Matthew Pittman has the Warstep Stakes (Listed, 2000m) on the filly’s agenda and if she were to continue in her current form may head to Queensland.

“Taking this filly to Queensland later on does hold some appeal,” said Pittman.

Irish Girl (El Roca) also made it back-to-back stakes on top of her strong finish in the South Island Breeders’ Stakes (Gr 3, 1600m) two weeks back.

She had plenty to do in the home straight as the leader, Seriously (O’Reilly), broke clear by three lengths. She cut the lead to two lengths at the 200-metre mark, then kept finding to wear down the leader inside the 50-metre mark and hold on by a head.

Irish Girl is assembling a healthy record. Saturday’s stakes success was her seventh win in 20 starts and her trainer Kenny Rae is also eyeing up a Queensland campaign.

“We don’t know if she can get 2000 metres,” said Rae. “But at weight-for-age down at Riccarton she will get her best chance. Safely through that then she can have a short break and we could still put her on a plane to Queensland for late June and July, when the other Kiwis are coming home.”