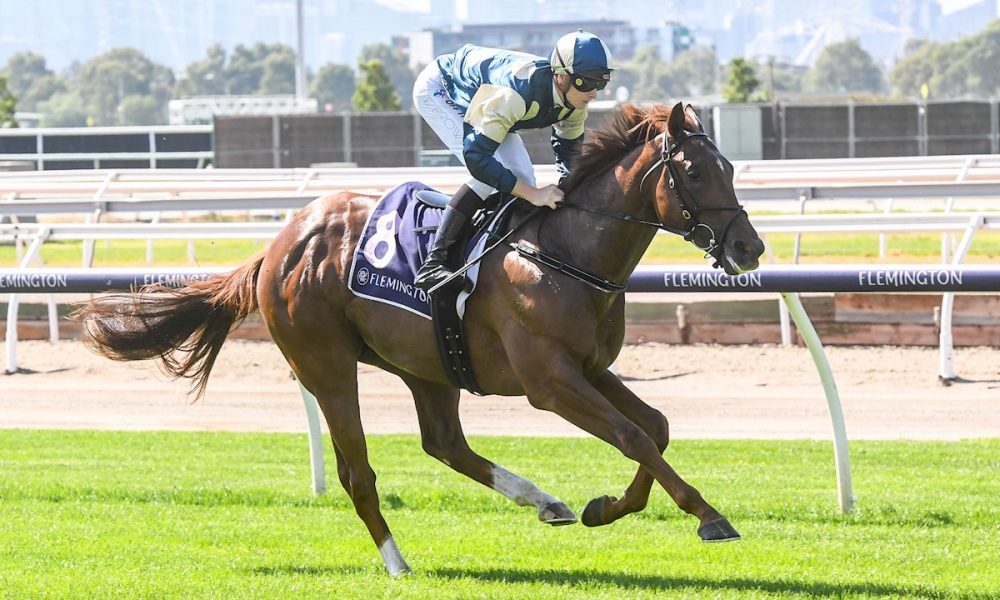 Danny Swain and Scott Cameron were due a change of luck.

The small-time co-breeders – Swain from the Glenelg Park farm near Euroa and Cameron a hardware store owner in Bateman’s Bay and Moruya – had bred a number of horses, but had absorbed more adversity than success.

They were fans of Capitalist (Written Tycoon), and had sent mares his way from his early years at Newgate Farm after his retirement in 2017.

“One of them had a lovely, big strong foal, who was born dead, and another we had high hopes for, but she slipped,” Swain tells It’s In The Blood.

They had bought an unraced, unsung Darley-bred mare called Isabella (Poet’s Voice) for $46,000 at Melbourne’s December Thoroughbred Sale of 2017. She was on the big side, so they picked a smallish sire in Invader (Snitzel), who stood at Aquis Farm for $27,500.

Second-up, Swain and Cameron booked in to Rubick, then standing at Coolmore in the Hunter Valley, for $38,500. But on the scheduled day, their unraced mare was bumped. Digesting the disappointing, yet understandable, turn of events for the unknown Isabella, they hastily secured a return to their old favourite Capitalist, though having to stump up his higher fee of $55,000.

In 2020, out came a well-built colt. He was foaled and reared at Glenelg, the 360-acre farm where Swain keeps his one or two mares plus a couple of dozen for clients. He was then sent to Tyreel Stud, on the Hawkesbury, for his preparation for last year’s Magic Millions yearling sale.

On auction day one, Swain and wife Sarina took their teenagers Ella and Ollie, and an iPad, into Euroa, as their best way of following what transpired.

“The internet is quite bad on the farm, so we went into town with the iPad and sat on the benches at the footy ground and watched him get auctioned,” Swain says. “I really didn’t have any high hopes. The mare’s first foal had made very little as a weanling, and I had that well and truly in my mind.”

Nothing could have prepared the Swain family for what happened next. Bidding on the strapping chestnut began – well ahead of Swain’s $4,000 mental motif of course – and quickly spiralled upwards.

“It started to get pretty exciting pretty quickly,” Swain says. “We soon knew we’d gone past the average.”

It was a long way from over. With the power table of Ciaron Maher and David Eustace clearly set on beating out their two or three rivals, the gavel finally fell in their favour – at $750,000. Euroa Oval was essentially deserted that day, but its four inhabitants made it quite the noisy place just then.

“I can’t quite remember what we did straight away, but we were all pretty over the moon,” Swain recalls. “It was an amazing feeling – just the excitement, and the surprise. It exceeded expectations by so much, and we were just amazed that it happened to us.”

On Saturday at Flemington, the remarkable tale acquired another arresting chapter, when the colt – Veecee – scored an imperious two-and-a-half length victory on debut up the Flemington straight 1100 metres. The product of that unplanned stop-gap mating with Capitalist is now the $9 third-favourite for the Blue Diamond Stakes (Gr 1, 1200m), and a $26 Golden Slipper (Gr 1, 1200m) chance.

“He looks like he goes well. He was out wide and had no rail to follow, but he really attacked the line,” says Cameron, 69, who’d also watched the sale online, and who calls himself “the silent partner” to the more experienced horseman in Swain.

“We’ve bred a fair few horses together over about ten years, but this colt has certainly been the pick of them. Danny’s got a great eye for a horse, and I generally listen to what he says.”

Isabella, whose two inglorious barrier trials had her declared short of Godolphin standard, had appealed to Swain mostly on type at that broodmare sale, with budgets again allowing not great room for top-notch pedigrees. Her sire, Poet’s Voice, was by the champion sire Dubawi (Dubai Millennium), but was shuttled by Darley five times with limited success. Isabella’s maternal background was fair, with dam Duelling Girl (Dayjur) throwing two Listed winners, and second dam Carduel (Buckpasser) two Group 3 victors in Europe.

“I thought she was a lovely, big strong mare, she moved well, and I thought she’d be a chance to throw something good,” Swain says. “She was a genuine 16.2 hands, scopey and with a lovely big shoulder and girth on her.”

Hindsight tells Swain he erred in seeking a smaller stallion first time around because of her size – a belief borne out by the 2022 filly by King’s Legacy (Redoute’s Choice), born by Isabella, who’s now in-foal to Farnan (Not A Single Doubt). Swain and Cameron have also bought back her first foal, that $4,000 Invader filly. While she stands only around 15.1 hands, a possible try on the track is in mind, and a breeding foray certain.

“I learned you don’t need to look for smaller stallions with this mare, because whilst she’s big, there’s nothing coarse about her,” Swain says. “And Veecee just came out beautifully. He was genuinely a good–looking colt all the way through his development. He was well-muscled and well-balanced and always held his shape.”

Swain also credits much of the colt’s auction success to the over-achieving Tyreel Stud, which at one early stage led that sale’s vendors’ averages, thanks mostly to Veecee, the top-priced of their 12 lots, who were all sold.

“Linda and Laurence [Monds] have done an amazing job with that farm since taking it over [in 2014],” Swain says. “Tyreel had a great reputation before that, but they’ve really taken it onwards and upwards. And they’re producing racehorses as well, not just sale horses.”

While the mating came through happenstance, it affected a couple of things that catch the eye in Veecee’s pedigree.

There’s a gender-balanced 4Sx5D cross of super sire Mr. Prospector (Raise A Native), including through his son Fusaichi Pegasus as Capitalist’s damsire. And there’s four distinct appearances of Danzig at 5Sx5Sx4Dx5D – the top two through Fusaichi Pegasus’ dam Angel Fever and Danehill, the bottom two via stallions Chief’s Crown and Dayjur.

But what also jumps out is that Veecee has lashings of the influential US-bred stallion Buckpasser (Tom Fool) at 7Sx7Sx7Dx4D, enhanced by some old age on Veecee’s female line.

Born in 1963, Buckpasser is mostly found in the dusty distant reaches of modern pedigrees, but that last appearance – 4D – comes relatively recently, as the sire of Veecee’s aforementioned third dam Carduel. This is made possible because of the long lag times in Veecee’s female line. Though Carduel is the third dam, she was born 45 years ago, in 1978. Veecee’s mum Isabella arrived in 2014 as the 13th and last foal of Duelling Girl (1996, Dayjur), the 11th named foal of Carduel.

The four appearances of Buckpasser bring in repetitions of a tight fusing of two of the most influential broodmares of all time, since Buckpasser has Plucky Liege (GB, 1912) at 4S, and La Troienne (FR, 1926) as his third dam.

So, Veecee has Plucky Liege at 11Sx11Sx11Dx8D, and La Troienne at 10Sx10Sx10Dx7D. Those two helpings come through Buckpasser alone – there are others – but this hints at the importance of so much Buckpasser in Veecee’s pedigree, especially relatively recently in the colt’s female line.

Plucky Liege comes into Buckpasser as the dam of Bull Dog, an important figure who’s the damsire of Buckpasser’s sire, Tom Fool.

And aside from his four appearances through Buckpasser, Bull Dog is in Veecee’s first nine generations three other times: through the mare Miss Dogwood twice (since she’s Mr. Prospector’s third dam), and via a son in The Doge (USA, 1942) in Poet’s Voice’s female side.

It also doesn’t hurt that Bull Dog is entwined in Veecee’s pedigree with two of the other three influential sons of Plucky Liege to whom he was quite different in type, in Admiral Drake (9Dx9D) and Sir Gallahad (9D).

All in all, Veecee presents as a lustrous feather in the caps of his modest dam Isabella, and Capitalist – who’s now joint-first on the two-year-old sires’ table by the score of his five winners, and second by earnings. Sometimes serendipity steps in when plans go awry.