Victorian trainer Stockdale seeks out the sun in North Queensland 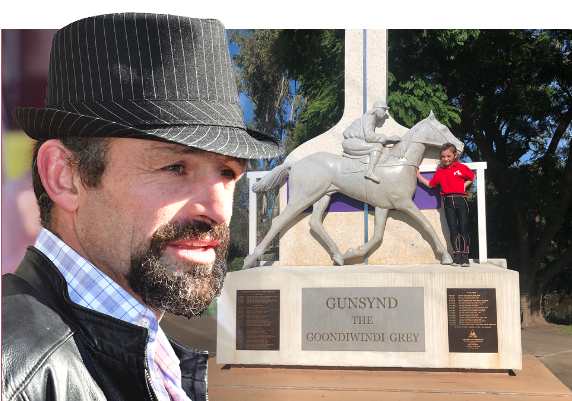 In years gone by, knockabout trainer Frankie Stockdale would be spending the depths of the Victorian winter educating a handful of yearlings for the the two-year-old sales later in the year and taking on the giants of the industry trying to win a maiden at Bairnsdale, Sale or his hometrack of Pakenham.

This year, after two years of largely being locked in his home state, Stockdale, his partner Julie and daughter Franki, 8, have hit the road, driving thousands of kilometres to where they currently find themselves domiciled on the banks of the Don River at Bowen, North Queensland’s oldest town.

It’s a far cry from the prestige of Royal Ascot, Randwick and Flemington – or, for that matter, the Group 1 Tattersall’s Tiara meeting at Eagle Farm on Saturday – but Stockdale wouldn’t have it any other way.

He has taken five horses with him – Riverside Special (Sebring), Dubai Moon (Pride Of Dubai), High Plain Tex (Lonhro), The Cruiser (Charge Forward) and Barney’s Blaze (Rubick). Riverside Special, Dubai Moon and Barney’s Blaze have all won races on their Queensland sojourn. Already, Stockdale has pocketed $50,000 in prize-money in the first six weeks of his trip, which he plans to extend until mid-October, taking in the Mackay, Townsville and Cairns carnivals. 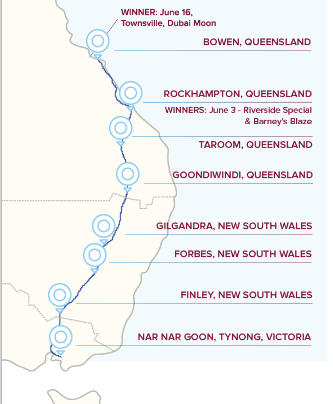 “We are having a bit of a working holiday, we took a few horses on the road and it’s been pretty good so far,” Stockdale said from his campsite yesterday, enjoying the 24-degree day.

“I wanted to get out of the cold weather down in Victoria and I’ve been intending to do it for years, but I am trapped with horses and I couldn’t get away, so instead I got a new truck that you can live in and headed off.”

Stockdale trained The Cruiser to win at Pakenham on April 21 and his last Victorian runners were on April 28 prior to heading off in early May, making his way to Finley, on the NSW-Victorian border before heading to Forbes, then Gilgandra, which coincided with a race meeting where Riverside Special and Dubai Moon both finished third, on May 15.

From there, he travelled to Goondiwindi on the NSW-Queensland border, a racing town made famous by the deeds of the early 1970s champion Gunsynd, dubbed the Goondiwindi Grey, before moving on to Taroom, about 380 kilometres north west of Brisbane. 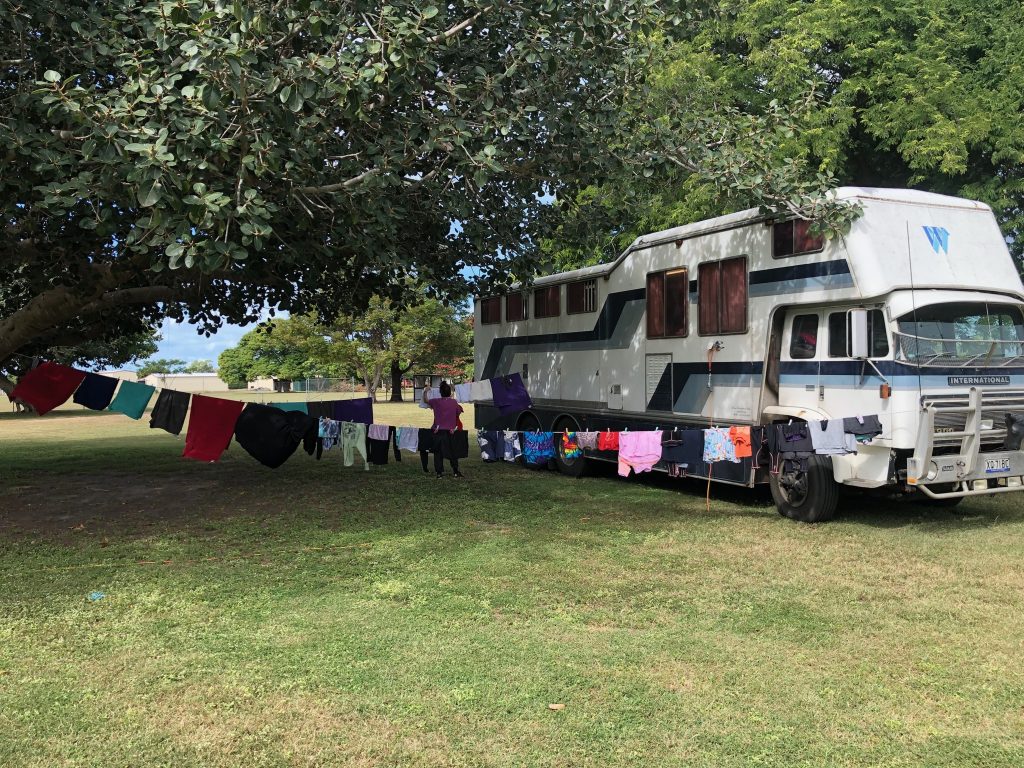 Rockhampton, the beef capital of Australia, was where Stockdale momentarily set up base, training two winners at their June 3 meeting, before heading further north to Bowen, almost 2,600 kilometres from home.

“It took about 14 days to get to Rockhampton and I took my time getting there, there was no rush,” he said.

“I will stay here for another month or so and then I’ll head up further north again.”

Stockdale has been working his team of five on the sand of the Don River and he and his horses are loving it.

“It only gets water in the wet season and it’s full of sand, so I have been working them up and down the dry river bed. It’s magnificent to work on,” he said.

“I have got my own sand track here – I am the only one who uses it. It is sensational, I reckon.”

It’s a lot different to the scenario he faces on course at Pakenham, which has effectively been turned into a metropolitan training facility.

“You’re always rushing and you’re in a hurry because you’ve still got three or four horses to work and the track shuts in half an hour,” he said.

“That’s why I’ve got away, living on the road and going to these country places where they’re pretty laid back. It’s like turning the clock back 20 or 30 years, more or less. It’s great.”

Soon after finishing “trackwork” yesterday, shortly before 1pm, Stockdale’s attention turned south, tuning into the opening race at Canterbury where a graduate of his Ready2Race programme, the Chris Waller-trained juvenile colt Alberich (Snitzel), won his first start and signalled the gelding had bigger things in store.

Stockdale sold the horse to G & C Pastoral’s Viv Oldfield at last October’s Ready2Race auction for $170,000, a tidy profit on the $80,000 he paid for him at Inglis Classic Sale eight months earlier, but such was the opinion the travelling trainer had of the then colt he was ruing the fact that he didn’t make more.

All was not lost, however, as Stockdale made sure he backed Alberich yesterday in the knowledge he’d educated an above average talent.

“He was a nice horse. I was spewing I didn’t get more money for him, that’s all. It was still good money but it didn’t get me ‘out’ properly. He went well and the horse is probably worth $500,000 or more now,” the laconic trainer lamented.

The Northern Territory, and specifically the Darwin carnival from June through to August, is often the winter refuge for many visiting trainers but, almost in keeping with his own life, Stockdale chose to do away with convention, choosing North Queensland as the destination for his mid-year getaway.

“Everyone said to go to Darwin, but for me, if you go to Darwin there’s nowhere else to go, you’re stuck there,” Stockdale said.

“What am I doing now? I can camp here for as long as I want and then if I get sick of this place, I can go to the next one. There’s heaps of places to go.

“You get around a lot more, see a lot of places instead of being stuck in one spot.”

Somewhere near Cairns – Innisfail or Atherton are most likely – will be Stockdale’s furthest north destination before he begins to make the long trip back down south later this year.

Stockdale is not only glad to have escaped the cold but also the might of his training rivals such as Ciaron Maher and David Eustace, Mick Price and Mick Kent Jnr, the Freedmans, Hayes Moroneys and Paynes.

“If you win a maiden they just about win in town next start, most of them. It is very tough racing down in Victoria,” he said.

“But they seem to go well up here. It’s easier, although it is getting stronger all the time as a lot of people are buying nice horses from the online sales.

“They’re spending a fair bit of money and when you get to the open class races, they’re still not that easy.”