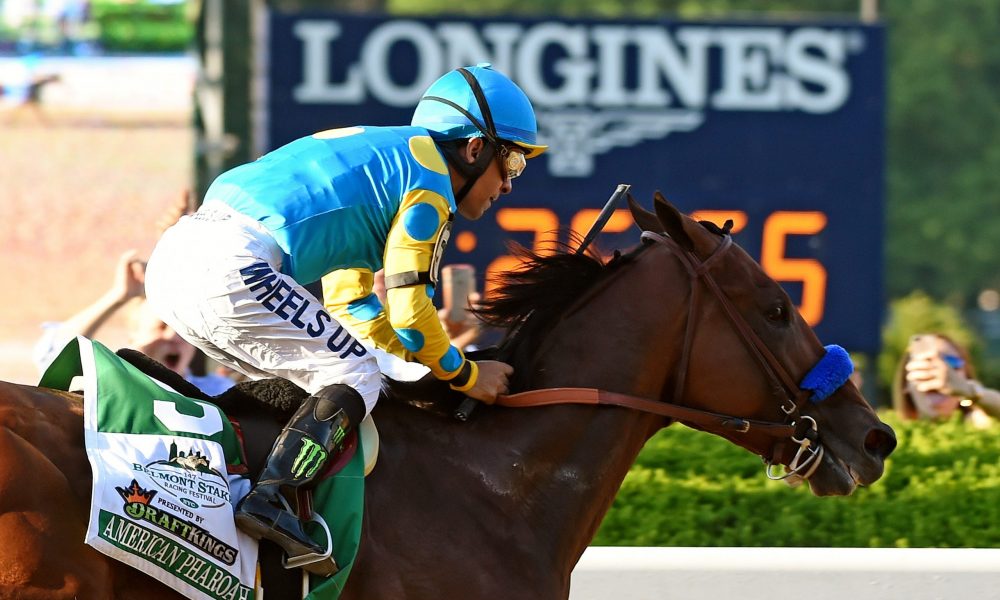 “The 37-year wait is over; American Pharoah is finally the one!”

The breathless call of Larry Collmus will forever remain the soundtrack to one of racing’s greatest moments of the modern era: when the Bob Baffert-trained American Pharoah (Pioneerof The Nile) strode clear for a dominant success in the Belmont Stakes (Gr 1, 12f), becoming the first horse in 37 years to win American racing’s holy grail, the Triple Crown.

It was a moment made more special by the fact that so many horses since Affirmed (Exclusive Native) in 1978 had won both of the first two legs of the Triple Crown – the Kentucky Derby (Gr 1, 10f) and the Preakness Stakes (Gr 1, 9.5f) – but had come up short in New York.

Spectacular Bid (Bold Bidder), Pleasant Colony (His Majesty), Alysheba (Alydar), Sunday Silence (Halo), Silver Charm (Silver Buck), Real Quiet (Quiet American), Charismatic (Summer Squall), War Emblem (Our Emblem), Funny Cide (Distorted Humor), Smarty Jones (Elusive Quality), Big Brown (Boundary), and California Chrome (Lucky Pulpit) all broke from the Belmont gates with a Triple Crown bid on the line; all returned with their dreams shattered and the hearts of a nation broken; and all added to the narrative that a Triple Crown winner in the modern era would require the thoroughbred equivalent of Pegasus.

“I’m 61 and I will never see another Triple Crown winner in my lifetime,” fumed California Chrome’s co-owner Steve Coburn in an infamous rant on national television after his horse was defeated in the 2014 Belmont Stakes.

He argued that horses that were fresh into the Belmont would always have the better of those that had travelled from Kentucky to Maryland to New York and contested all three legs of the Triple Crown over a gruelling five weeks, not to mention the prep races that were required to score points just to gain a start at Churchill Downs.

And then, just a year later, came American Pharoah.

“American Pharoah’s Belmont Stakes win was an incredible moment and to have been the guy calling that moment was surreal,” Collmus told ANZ Bloodstock News from his New Jersey home.

“I’d been calling races since I was 18 years old and it was exactly 30 years and a day since I called that first race when I got to call that historical moment.

“The entire building was shaking. Even though I was eight levels up and glass enclosed, the sound was deafening when he reached the finish line. So many horses before him tried and failed and here was that magical moment we’d all been waiting for.

“The minutes after the race when it finally kicked in were wild. The roar went on and on as Victor Espinoza gave him a ‘victory lap’ in front of the grandstand. I saw the video of me banging on the window in excitement. I had no idea I was even doing it.

“I don’t think there could ever be a race in America that could match the excitement of that one. The only one that came close was when Pharoah finished his career winning the Breeders’ Cup Classic. It was a perfect way to end it and was very emotional for me.

For American racing fans, from the hot walker to the chief executive, it still remains the greatest moment they have experienced.

“I’d never before experienced anything like that race on that day and I doubt I ever will again,” recalled Pat Cummings, executive director of Kentucky think tank, the Thoroughbred Idea Foundation (TIF).

“It was the closest thing to an out-of-body racing experience. The crowd normally cheers at the start of the Belmont and then everyone settles – that didn’t happen, and with about a mile left to run and American Pharoah dictating the pace, the crowd just went full throttle and didn’t stop.

“Once he passed the finish, the cheering just did not relent for minutes, the place lost its mind in the most wonderful way. It really was the release of decades of emotion, and if you go back and watch the replay of the race and the aftermath, I think that still translates and gets across. It gives me chills every time I watch it back.”

While there was a 37-year wait for the 12th member to join the pantheon of Triple Crown greats, it has only been half as long – 18 years – since a Triple Crown winner had a yearling up for auction at the Inglis Australian Easter Yearling Sale.

In 2002, the tenth Triple Crown winner Seattle Slew (Bold Reasoning) had his final yearlings anywhere in the world go through the Inglis Easter sales ring, a month before his death in Kentucky. He had three consigned lots; two made it to the ring; only one sold. That yearling never raced.

It will be a different story in 2020 – and not just with American Pharoah. In fact, the 2015 Belmont is set to have a strong influence on this year’s Inglis Easter auction, with that year’s runner-up Frosted (Tapit) also represented for the first time at the sale.

It will also be different in that these yearlings, unlike the final two Seattle Slews, won’t be going through a physical sales ring. Until last week, the mere difference was that the sale had shifted from the Newmarket complex at Randwick to Warwick Farm’s Riverside site, but with Covid-19 wreaking havoc on the sales season, they will now be a part of a new era.

They will forever be members of the class of 2020, when Inglis Easter became the first major auction on the planet to be conducted on a digital platform.

At time of writing, Coolmore’s American Pharoah had 21 lots up for grabs, with a Frosted half-brother to New Zealand Derby (Gr 1, 2400m) winner Crown Prosecutor (Medaglia d’Oro) also set for the virtual ring.

While American Pharoah’s oldest southern hemisphere crop are yearlings, he has already been represented on the track in the northern hemisphere with his oldest crop a couple of months into their three-year-old year. And what has caught US trainers off-guard is how adept his runners so far have been on turf, given the Triple Crown winner never left the dirt during his career.

So far, American Pharoah has had six stakes winners, four on grass. His best performer, according to Racing Post Ratings, is the Aidan O’Brien-trained Monarch Of Egypt, who ran second in the Phoenix Stakes (Gr 1, 6f) in August.

While the figures could be attributed to a number of his stock being in the hands of European trainers – O’Brien, Charlie Appleby and Andre Fabre all have stakes-performed American Pharoahs so far – or that his best sons have been with one of America’s leading turf trainers in Wesley Ward, it is being noticed by some of the leading US trainers with a penchant for dirt as well.

Trainer Todd Pletcher, for instance, said of Breeders’ Cup Juvenile Fillies’ Turf (Gr 1, 1m) placegetter Sweet Melania: “She kind of fooled us a little bit, because I thought she’d be successful sprinting on the dirt. She didn’t run badly either time, but she didn’t run to our expectations and we got her up here and breezed her on the grass, and wow, she really seemed to take a move forward.”

Ward, who had trans-Atlantic stakes success with sons of American Pharoah thanks to Breeders’ Cup Juvenile Turf Sprint (Gr 2, 5f) winner Four Wheel Drive and Prix du Bois (Gr 3, 5f) victor Maven, noted that many of the American Pharoahs in his barn have possessed the same calm temperament as their sire.

“From everything I saw with American Pharoah, his demeanour, he was a very docile horse. He was more like a stable pony than a stallion, he could go anywhere and he took everything in,” Ward said. “The American Pharoahs I’ve had have been the same. Four Wheel Drive, nothing worries him and he’s very calm.

“I had a conversation with Bob Baffert when the horse went to stud about what he thought about him being a grass sire. He said that’s the one thing he said he wished he had done, that he wished he had run him on grass.

“For him to say that, you know, he knows what he’s doing, and there was no reason for him to be selling me on the question I was asking, so I thought he gave me a truthful answer. And American Pharoah has really stepped it up on being a turf sire, that’s for sure.”

In 2022, there will be two Triple Crown winners represented in the Inglis sales ring for the first time ever when the first Justify (Scat Daddy) yearlings make their appearance. For now, though, Easter buyers will be swept up in the Pharoah fever that, to this day, still rings right around the American industry.