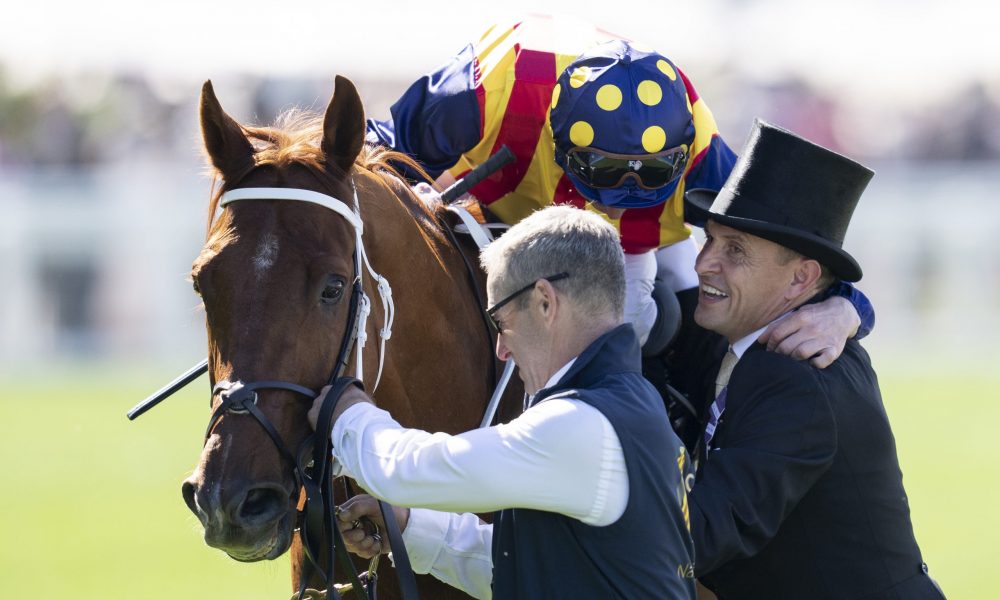 The dust has barely settled on this year’s Royal Ascot carnival but already Chris Waller has his eyes set on a return to Europe’s showpiece meeting in 12 months’ time.

Nature Strip (Nicconi) justified his claims to be the first horse trained in Australia to be rated the world’s highest since Black Caviar (Bel Esprit) following his explosive win in Tuesday’s King’s Stand Stakes (Gr 1, 5f) but despite suffering a setback when Home Affairs (I Am Invincible) could finish only 20th in Saturday’s Platinum Jubilee Stakes (Gr 1, 6f), the champion trainer has vowed to head north again next year, this time with a potentially larger team.

Waller’s previous forays to Ascot had been limited to just Brazen Beau’s (I Am Invincible) second in the 2015 running of Saturday’s race, but after earning plaudits from Britain’s racing fraternity, he is adamant he will make a return.

“We will be back,” Waller said without hesitation when questioned as to whether he intends to have runners at the royal meeting next year and beyond. “It has been a great week but that’s racing, you can never own it or dominate it, but you try and do the best you can.”

Asked whether he intends to look beyond the sprinting division for any future raiding parties Waller said: “Talk is easy. The horses here are very good and we respect that. They are good at what they do and they are very fit.

“Australian horses are more explosive, both our 2000-metre horses and our sprinters. It is a unique type of horse up here and you’ve got to be very good.

“The races are hard to win this week but if we can we will bring the right horses and we will be competitive.”

Nature Strip headed into the week as the joint second highest-rated horse in the world, on a mark of 124, one point behind list topper Baaeed (Sea The Stars) and whilst that rival was also successful at Ascot when landing the opening Queen Anne Stakes (Gr 1, 1m) on Tuesday, such was the manner of Nature Strip’s four-and-a-half-length demolition job two races later, he could well earn a higher figure.

Reflecting on the race, British Horseracing Authority handicapper Chris Nash said: “We probably saw a very special performance from Nature Strip in the King’s Stand Stakes. That margin of victory isn’t often seen in five furlong races let alone in a Group 1 and at Ascot on good to firm ground it equates to a 16lb margin of superiority over the others and that is before factoring in any potential extra for how easily he did it.

“He arrived here rated 124 which made him the highest-rated sprinter in the world and he has fully justified that figure and a little more besides.

“The leading performance in the race this century was the 122 figure recorded by the American-trained Lady Aurelia when she won the 2017 renewal by three lengths – with her fillies’ allowance added back in that equates to a 125 figure, I will crunch the numbers a little more but Nature Strip is likely to have breached that.”

Charlie Duckworth, Waller’s racing manager, is hopeful that Nature Strip will top the international classifications when the updated figures are released tomorrow.

“It was the performance everyone was talking about,” he told ANZ Bloodstock News yesterday.

“Every day people were still talking about the dominance of his win. It’s been pretty special for us to travel him over here and for the horse to put in a career-best performance. To do that at Ascot made it that much more special and hopefully he can be up there towards being the highest-rated horse in the world.

“He’s obviously the best sprinter in the world, he proved that on Tuesday, but Baaeed is an absolute freak. I’m just pleased with how our horse went for us.”

Reflecting on the week as a whole Duckworth, who along with Waller was due to fly back to Australia yesterday, said: “It’s been one of those experiences that money couldn’t buy. It’s been unbelievable.

“We’ve had some pretty amazing times in Australia the last year, winning the Melbourne Cup and winning The Everest with Nature Strip. But this, for me and I think Chris as well, is just a whole new level.”

Also heading back home soon will be Nature Strip himself. Although he tops the betting for Newmarket’s July Cup (Gr 1, 6f) with a number of the bookmakers in the northern hemisphere, Duckworth confirmed he would not participate in the race.

“He’s already in quarantine now so he’s on his way back to go and defend his title in The Everest,” he said.

Home Affairs, meanwhile, looks set to have run his last race after it emerged he pulled up lame after beating just four rivals home after being sent off the 5-2 favourite for the Platinum Jubilee Stakes.

The stewards looked into the performance of the dual Group 1 winner with a representative of Waller unable to offer an explanation for the performance other than that James McDonald reported that the colt may have ran too free in the early stages. A representative of Coolmore yesterday confirmed that he pulled up lame and a decision over his future will be made within the next few days.

It had already been announced that Home Affairs would take up stud duties at Coolmore Australia for the coming breeding season, for which he has acquired a full book of mares, and will command a fee of $110,000 (inc GST).

While the July Cup may seemingly be off the agenda for Nature Strip and Home Affairs it does, however, look like being the next destination for Artorius (Flying Artie) following his dead-heat for third with US sprinter Campanelle (Kodiac) in the Platinum Jubilee.

Artorius’ rider Jamie Spencer was suspended for two days for using his whip above the permitted level from two furlongs out in what the stewards found to be an incident-packed finish for the Anthony and Sam Freedman-trained sprinter.

Approximately half a furlong from home Artorius was struck over the nose by the whip of a rival jockey in what was declared to have been an accidental incident, before the three-year-old himself was found to have lugged right-handed on the line. Although the stewards found that caused knock-on interference to Highfield Princess (Night Of Thunder) who finished sixth, and the eighth-placed Kinross (Kingman), they deemed that no riding offence was involved and that it had not improved the placing of Artorius.