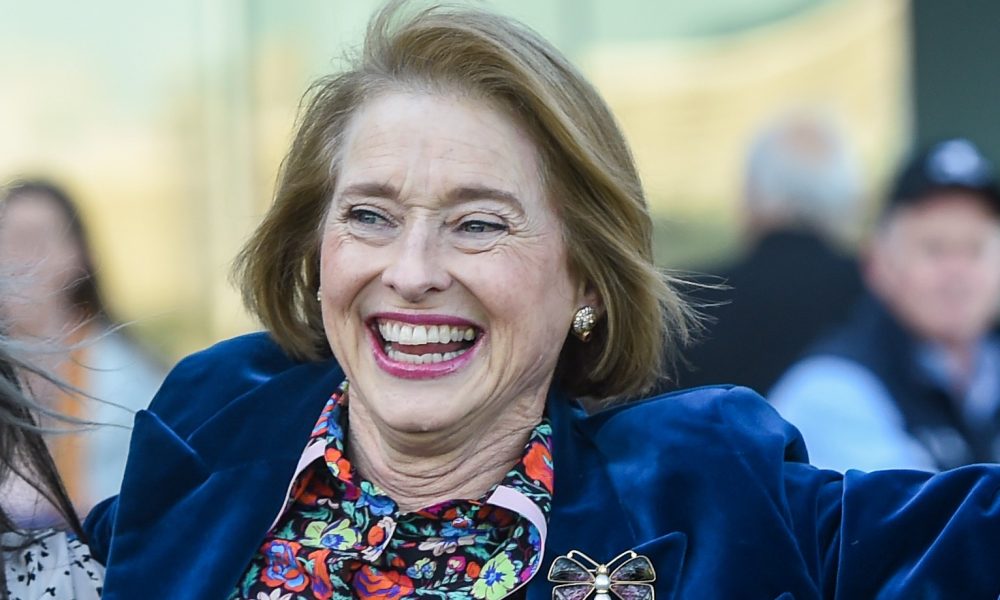 Gai Waterhouse holds a strong hand in her quest to fill a surprising hole in her trophy cabinet at Randwick today, as she seeks a first win in one of the key racing and breeding events on the calendar, the Gimcrack Stakes (Gr 3, 1000m).

The master trainer is sitting on one potent deal of three of a kind – a record seven Golden Slippers, seven Breeders’ Plates, and the same number of Sydney trainers premierships.

Yet for all that success, especially with two-year-olds, she still awaits the turn of a friendly card in Sydney’s career-launcher for fillies. The Hall of Fame trainer is, however, confident that she will rarely have had a better chance than today.

Waterhouse and Adrian Bott, her co-trainer since 2016, will saddle three key fancies in the time-honoured Gimcrack – the three fastest winning fillies at Randwick’s official trials day – all bought through the stable’s partnership with Bruce Slade’s Kestrel Bloodstock, and by three of the hottest sires in the land.

While another heavy track has clouded the picture, Perfect Proposal (Russian Revolution) was a short favourite last night at around $2.60 ahead of Sicilian (I Am Invincible) at $4.50, with their stablemate Platinum Jubilee (Zoustar) one of only two others at single figure odds in the 14-strong field.

For good measure, the Tulloch Lodge team also has another trial winner in Tarabeau (Brazen Beau) among the top three in the market for the colts and geldings’ kick-off, the Breeders’ Plate (Gr 3, 1000m).

“I haven’t won a Gimcrack. I can’t quite understand why, but it hasn’t happened,” Waterhouse told ANZ Bloodstock News. “I guess I’ve made up for it in the Breeders’ Plate, but we’ll be trying very hard this time to change that stat, and I think we’ve got three in the race that have a good chance of giving it a shake.”

Waterhouse, Bott and Slade paid $420,000 at Easter for Perfect Proposal, the ninth foal out of the stakes-placed Perfect Persuasion (Encosta De Lago), a fll sister to the flying Alinghi. Bred by the China Horse Club and sold through the Sledmere Stud draft, Perfect Proposal sizzled on trial day to win by the biggest margin of the ten heats – two and a quarter lengths – and in the best time. Even considering the Soft 6 track was still in reasonable shape for the second event of the morning, her 51.06 seconds for the 850 metres – 0.32 seconds faster than the next-best filly, and 0.13 seconds faster than the slickest colt of the day in heat one – has helped in her rating as favourite today.

So, too, has the burgeoning performance at stud of her young Newgate sire, comfortably last year’s champion first-season stallion, and a strong sixth on the two-year-old table.

“Russian Revolution – how could you have anything but a big opinion of him?” Waterhouse said. “He’s going from strength to strength, he’s already a wonderful sire, and he has the makings of a very, very good sire.

“I don’t really need to pick between our three fillies in the Gimcrack – the three could easily run first, second and third.

“But Perfect Proposal did have the most impressive barrier trial. She was by far the fastest, and time generally wins these two-year-old races; usually the horse who’s run the fastest trial time seems to win.”

Sicilian, who took the second-fastest fillies’ trial by one and a half lengths, was the most expensive of Tulloch Lodge’s three Gimcrack starters. The third foal of the stakes-placed Pursuits (Lonhro) was a $650,000 purchase from the Yarraman draft at the Magic Millions sale.

“She’s big and strong, which you might expect of I Am Invincible, and just a really lovely filly,” Waterhouse said.

Bred by Go Bloodstock, Platinum Jubilee was a $600,000 buy from the Newgate draft at the Gold Coast, and is the second foal from the stakes-winning Fastnet Rock (Danehill) mare Miss Debutante, daughter of Breeders’ Cup Juvenile Fillies Turf Stakes (Gr 1, 8f) winner More Than Real (More Than Ready).

“She’s another impressive filly and like the other two in that they all just roll up their sleeves and get on with the job,” Waterhouse said.

“I always like to buy sensibly-priced fillies, because that’s exactly where we’ve been so successful over the years, with all these sorts bought for not huge amounts of money but sold for enormous amounts when they retired.”

Before seeking her breakthrough Gimcrack, Waterhouse also likes her chances of winning an eighth Breeders’ Plate – her first since four in succession starting with Pierro (Lonhro) and ending with Vancouver (Medaglia D’Oro) in 2014 – with Tarabeau.

Bred by a partnership headed by Louis Mihalyka’s Laurel Oak Bloodstock – who’ll be cheering Fireburn’s (Rebel Dane) bid for a third Group 1 in the Flight Stakes (Gr 1, 1600m) today – Tarabeau was the cheapest of the Tulloch Lodge foursome, at $90,000 from Silverdale Farm’s Inglis Classic draft.

The first foal of city-winning Sepoy (Elusive Quality) mare Tarabai, he showed his style in winning the last heat on trials day by two lengths in 51.94 seconds.

“Tarabeau’s a very nice colt. He certainly ran fast time and he’s a good style of a horse, and at $90,000 he was affordable for the owners,” said Waterhouse.

As Sydney’s deluge continued last night, Tarabeau was among six of the nine Breeders’ Plate runners at single-figure odds. John O’Shea’s Physical Graffiti (Russian Revolution) held favouritism at around $3.50 after a second in the first and fastest colts and geldings’ trial to the smart Don Corleone (Extreme Choice).

While co-trainer Peter Snowden said he’s missing probably his most promising two-year-old colt in Don Corleone – who had an elevated temperature on Tuesday – he’s bullish on the chances of Empire Of Japan, provided – like all today’s babies – he’s found to handle heavy going.

“Empire Of Japan is a very nice horse. He trialed quite well and was very good late, and has come on really well since the trial – probably the best that any of my colts has,” Snowden told ANZ Bloodstock News. “He handled the soft very well that day, so he gets a chance from his nice draw (seven) in the Breeders’.”

“The heavy track is not ideal, but they had it at a Soft 5 or 6 at the trials when it was more like a 7, so they’ve all been exposed a bit to the elements.”

Snowden had a mixed forecast for his Gimcrack fillies Satin And Silk (I Am Invincible) – second in Perfect Proposal’s trial and a $7 shot today – and Divine Glory (Hellbent), who was second to Platinum Jubilee and is at $13.

“Satin And Silk (I am Invincible) is the really precocious one, but I’ve trained all that family and while they’re very fast, they don’t tend to go on wet ground,” he said.

“Divine Glory is very honest and genuine, and she does handle the ground. She’s always worked well in the wet so that gives her a hope.”