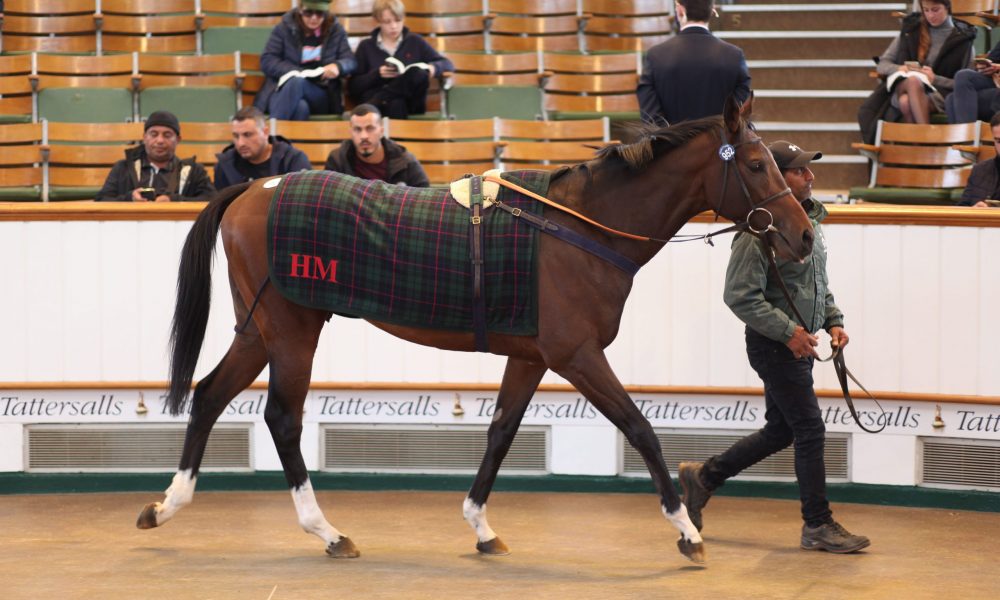 The third day of action at the 2021 Tattersalls Autumn Horses In Training Sale saw Australian interest hit peak levels as at least eight different buyers struck for purchases, including Gai Waterhouse and Adrian Bott, and Annabel Neasham and Stuart Boman, who returned to the sale after sourcing dual Group 1 winner Zaaki (Leroidesanimaux) a year ago.

Gai Waterhouse made her first Tattersalls purchase since acquiring subsequent stakes winner Knight Errant (So You Think) at the 2018 Horses In Training Sale.

Consigned by Hughie Morrison’s Summerdown Stables, King Of Clubs has a BHA rating of 93 after a Class 2 handicap win over a mile and a quarter at Sandown two starts ago, taking his career record to two wins from eight starts.

“King Of Clubs is for Gai Waterhouse and Adrian Bott,” reported buyer Johnny McKeever. “He is a lovely horse, Robbie Waterhouse liked the form, I liked the horse, Hughie Morrison recommended him.

“It is the same formula we have always used – find the horse we like, with the right form, with the right rating, and hope he or she adapts to Australia. We think this is a horse who looks like he will make a nice stayer in Australia.

“We like to try and buy between 95 and 110, but they are hard to come by and there are only a few in this sale. We are all sharing them around, I think.

“They have been making more than we have been prepared to spend so we’ve had two blank days – hopefully we’ve got another couple to follow.”

“We have identified some very good horses – Knights Order (Knight Errant) came out of this sale. We have a good record of spotting the ones to suit us.”

Bred by Meon Valley Stud, King Of Clubs is from the stud’s leading family of Bella Colora (Bellypha), the dam of champion older horse Stagecraft (Sadler’s Wells), and is a half-brother to useful winners Garden Oasis (Excelebration) and Royal Mews (Siyouni).

Another big purchase was to follow as Stuart Boman also went to 230,000 guineas (approx. AU$441,448) to acquire Matthew Flinders (Siyouni) out of Ed Walker’s yard.

The four-year-old gelding, with a BHA rating of 101, will be headed to Annabel Neasham’s Warwick Farm-based yard.

Boman said: “This is my second purchase for Annabel at this sale, the first one obviously very successful!

“It is going to be a hard act to follow, but we wanted to target what we felt could be one of the nicest horses for Australia.

“His ability is far better than what the form book shows. He is a horse who constantly travels best of all, in any field he is in.

“I spoke with Ed Walker and I think he has probably felt he has had a Group horse on his hands for a long time – he wanted him to win his big handicap but he never had his day.

“The handicapper then forced his hands by raising the horse’s mark so high. He ran so well at Chester (July 10) leading into the Balmoral Handicap in October and put in another good run there.

“He is thoroughly consistent, runs to a very high rating all the time, always runs a 105, he is a strong travelling horse and should really suit Australia with the firm ground and there are a lot of races for him in his distance range.

“I am delighted for Annabel, she is flying along, she has two runners in the Golden Eagle on Saturday, which is worth A$7.5 million race, things are healthy in Australia.”

Of last year’s headline purchase, Boman added: “Zaaki has been phenomenal, it is fantastic. It is remarkable what one horse can do for people’s lives and careers.”

Waller and Star Thoroughbreds in the action

Star Thoroughbreds and Chris Waller also made their first buy as they purchased Carbon for 50,000 guineas (approx. AU$96,000) from Roger Varian’s Carlburg Stables.

The two-year-old by Kodiac (Danehill) was last seen finishing third on handicap debut off a BHA rating of 81 over 1600 metres at Kempton.

The third foal out of unraced mare Mzyoon (Galileo), he is a half-brother to the Australian winner Zegalo (Zoffany), who is also housed at Chris Waller Stables.

Meanwhile, Matt Cumani will bring two-year-old Hanaady to Australia. The daughter of Night Of Thunder (Dubawi) was a 120,000 guineas buy alongside JS Bloodstock and Hurworth.

The filly recorded her first win on September 29 at Nottingham and was sourced from the Shadwell draft.

Without Envy was an 85,000 guineas (approx. AU$163,144) purchase for Fortuna New Zealand out of Andrew Balding’s Park House Stables.

The three-year-old gelded son of Lope De Vega (Shamardal) is out of the winning Danehill Dancer (Danehill) mare Purple Pearl and is a half-brother to winners Purple Light (Kendargent) and Native Star (Nathaniel).

“We had had a few others slip through our fingers earlier in the sale, nice horses that went for more than our budget, however we had zeroed in on this horse as he is a lightly raced three-year-old (one start for a strong second at Royal Ascot in a Novice Stakes race on October 1 this year),” Galvin said.

“Clearly a slow maturing type, he is a big strong individual who should be ideally suited for distance racing in New Zealand/Australia. Big thanks to the Fortuna Trainers, Jamie Richards (NZ) and Mark Walker (Singapore) who assisted me in researching suitable lots.

Without Envy will now be sent to New Zealand Champion trainer Jamie Richards at his base in Te Akau.

A two-year-old son of Sea The Stars (Cape Cross), the gelding has been placed twice on both of his outings so far, by a neck at Chelmsford on debut and by two and a quarter lengths on his second start at Bath.

Al Aabir is the second foal out of unraced mare Wo De Xin (Shamardal) and is a half-brother to winner Bulls Aye (Intello).

After purchasing Lot 675, a three-year-old colt by Kingman (Invincible Spirit), for 40,000 guineas (approx. AU$76,773) yesterday, Australian Bloodstock added to their haul of purchases when they acquired Spangler. Catalogued as Lot 954, the three-year-old son of Starspangledbanner (Choisir) won on debut as a two-year-old, and was purchased for 55,000 guineas (approx. AU$105,563).

Another Lot consigned by Hughie Morrison’s Summerdown Stables, Spangler is the third foal out of unraced Dalakhani (Darshaan) mare Sixpenny Sweets, who is a half-sister to Group winners Knight To Behold (Sea The Stars), Beauty O’Gwaun (Rainbow Quest) and Cosmo Meadow (King’s Best).

Towards the end of Tuesday’s session, Ciaron Maher was yet another Australian to rack up a trio of purchases yesterday when he acquired Lot 737. Strawberry Rock, a four-year-old gelding by Rock Of Gibraltar (Danehill), was purchased with Cunningham Thoroughbreds and Lynch Clarke for 185,000 guineas (approx. AU$355,000).

The Victoria-based trainer was adding to earlier buys of Montather (Dubawi) and Camelot Tales (Camelot).

Consigned by Avenue Sales on behalf of Hugo Palmer’s Kremlin Cottage Stables, Strawberry Rock is the first foal out of Azamour (Night Shift) mare Strawberry Vodka, who herself is half-sister to Listed winners Tony Curtis (Rock Of Gibraltar) and Strawberry Martini (Mount Nelson).

The top lot from Tuesday’s session was the dual Group 3 winner and Group 1-placed Grocer Jack (Oasis Dream), who was eventually bought for 700,000 guineas (approx. AU$1.34 million) by Saad bin Mishraf of Najd Stud after a ferocious bidding war with Michael Donohoe of BBA Ireland.

The sale will be brought to a conclusion today with day four beginning at 9:30am.