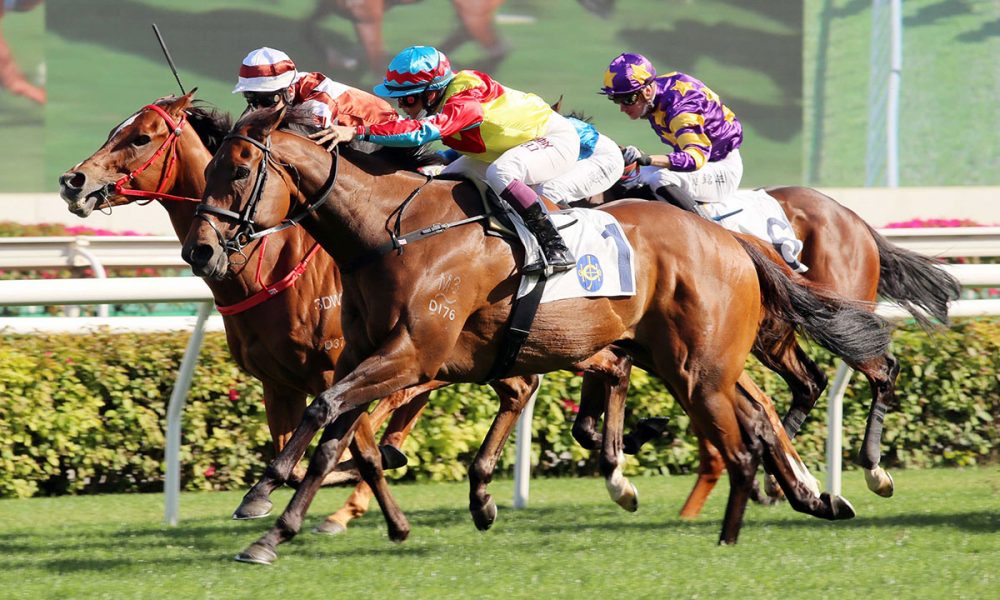 Richard Gibson will attempt to crown Wellington’s (All Too Hard) season in familiar fashion by chasing victory in the Chairman’s Sprint Prize (Gr 1, 1200m) after the speedster snared the Sprint Cup (Gr 2, 1200m) at Sha Tin yesterday with another outstanding display of power.

Conceding weight to seven of nine rivals, Wellington shouldered 128lb under Alexis Badel to deny Sight Success (Magnus) by a neck after surging down the middle of the track, while Master Eight (Oamaru Force) was third, a further three-quarters of a length away.

Bidding to claim a third Group 1 feature at the glittering Champions Day meeting on April 24, Wellington demonstrated his superiority yesterday after outsprinting his opponents with a withering 21.68s burst over the final 400 metres, charging from seventh to triumph in the process.

Gibson quickly confirmed the son of All Too Hard (Casino Prince) would be spelled immediately after his next assignment, just as he had been last season in the aftermath of Group 1 success.

“It’s only a few weeks’ time, these horses are in good shape,” Gibson said. “His last run of the season will be in three weeks’ time. He’s been the best sprinter in Hong Kong for some time. He was carrying quite a big penalty today and I thought he showed some class and style once again.

“The stats were against us in these races, so there was a bit of pre-race nerves but the horse has been training so well and showed a lot of class and ability today.”

Badel patiently balanced the explosive Wellington behind a solid speed set by Kurpany (Mayson) before tracking Hot King Prawn (Denman) into the race and fanning wide into the straight.

“From that draw (7), I was happy to come back a little bit if the pace was good enough. I was happy to follow Hot King Prawn. I knew Sight Success could be a rising star because of the handicap situation, he was carrying a little bit less weight,” Badel said.

“But Wellington is back to his best form and he gave me a fantastic turn of foot and he was also brilliant through the line because he fought back. I’m very happy, very pleased.

“Last time over 1400 metres, he was so relaxed and today we came back to 1200 metres against very fast horses and I was worried that maybe the horse has lost a bit of speed, but he showed that he was again brilliant today and very mature.”

Frankie Lor reclaimed the lead in the trainers’ championship with Sakewin’s (Birgundy) brilliant debut victory in the second section of the Class 4 Peel Handicap (1200m) under Joao Moreira to share training honours for the day with Francis Lui.

Jumping from barrier 14, the New Zealand-bred swiftly found the rail to control the speed before surging away for a comfortable win, providing Lor with a double – and overall leadership in the battle with John Size because of a greater number of minor placings.

Lor, who registered his 300th Hong Kong victory with Sakewin, and Size each have 61 wins.

“Sakewin’s a nice horse, he did a good job today,” Lor said. “The draw as a bit of a worry, but he did a good job. He could go up to Class 3 but he’s still not fully mature, so it might be a bit tough for him at this stage.”

“He still looks like he’s learning, when he goes past the horse he’s still hanging,” Lor said. “Zac told me the horse is still learning.”

Deflecting discussion over his chances of annexing his first trainers’ championships, Lor remains wary of his former mentor Size.

“Still have three months – always try hard. All I think about are the owners who support me, but my former boss will be extremely hard to beat for the championship,” Lor said.

Plagued by leg injuries, Dragon Pride has won four of his past five starts for Yung, who has again enhanced his reputation for rehabilitating injury-prone horses.

“The key thing is the health. The main issue in the past is that we’ve spent some time getting his health back and with the owners’ patience, this year he keeps improving,” Yung said.

Chadwick closed the meeting by sealing a double aboard Rock Ya Heart (I Am Invincible), whose success in the Class 3 Harlech Handicap (1200m) also provided Lui a brace following Golden Sixty’s (Medaglia D’Oro) win in the Chairman’s Trophy (Gr 2, 1600m).

David Hall lauded Luke Ferraris after the South African triumphed on Kung Fu Tea (Shocking) in the Class 5 Severn Handicap (1400m). Jumping from barrier 11, Ferraris quickly found the rail before taking a narrow gap to down Noble Man (Exceed And Excel) by a neck.

“It was a brilliant ride,” Hall said