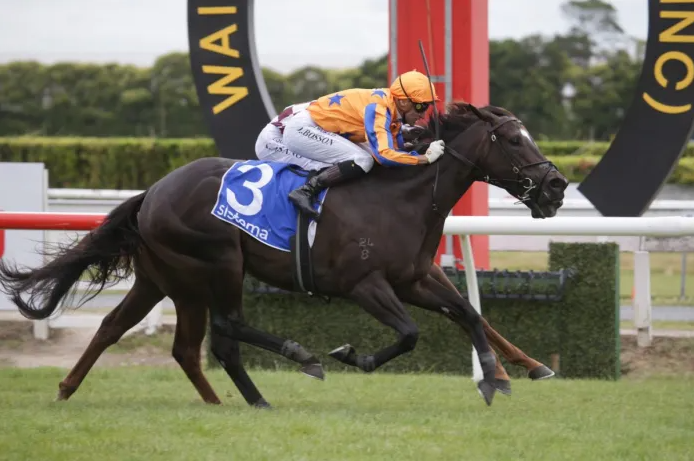 A perfect track, not too hot (peaking at 22C) and good fields were on offer at Te Rapa on Sunday for the meeting that, traditionally, would have been held at Ellerslie.

Auckland Thoroughbred Racing’s first day of their Boxing Day/New Year’s Day festival was held at Pukekohe and gave us two memorable performances from two of the leading three-year-olds in the country, Legarto (Proisir) and Wild Night (Vanbrugh).

New Year’s Day included six stakes, the Railway Stakes (Gr 1, 1200m) – the first Group 1 of the year – plus four Group 2s and a Group 3. By the end of the day, Mark Walker and Te Akau Racing had bagged three of them while Roger James and Robert Wellwood’s Kingsclere Stables landed two.

As Te Akau principal, David Ellis, remarked: “Mark is on fire”, but so is the stable’s chief rider, Opie Bosson, who was atop all three for Te Akau.

Imperatriz (I Am Invincible) may have three Group 1s to her name and two were over 1600 metres, but after Sunday’s fresh up win in the Railway, the brilliant mare may be kept to sprinting from here on out.

Bosson waited rounding into the straight and was presented with a great view, his mount in fifth upon straightening. Given a shake at the 300m she had the speedster Babylon Berlin (All Too Hard) to catch, was still two lengths in arrears at the 200-metres and not significantly closer at the 100-metres, but wore her down over the final 50-metres to win by a head, the win, in a slick 1:08.9, taking her earnings to $787,300 from ten wins, including seven stakes, from 15 starts.

Put aside after an ordinary run in the Arrowfield Stud Plate (Gr 1, 1600m) at Matamata in October, Imperatriz returned to Te Rapa, where she remains unbeaten, collecting two Group 1s, a Group 2 and a Group 3. The let up obviously did her good and we may need to go back to her run on September 10 in the Tarzino Trophy (Gr 1, 1400m) to discover where things appeared to stall.

“I think having her back on top of the ground today was key,” said winning trainer Mark Walker, “I’m very proud to see the mare come back like this. The other big part of it is Opie Bosson. There’s no jockey quite like him in New Zealand when it comes to big races, and he’s done it again today.”

Imperatriz started her four-year-old campaign with an easy win at Ruakaka followed by a walk in the park when slaying a decent field in the Foxbridge Plate (Gr 2, 1200m), which was run on a heavy track, yet loose enough to get through.

However, the track at Hastings for the Tarzino was like glue, affecting the subsequent form of several prominent performers. Although she tried her hardest when running fourth, that track was simply too difficult, too testing, as Bosson explained to stewards after the race.

The Tarzino winner, Dark Destroyer (Proisir), has not been seen since, running out the 1400 metres in 1:32.49, or eight seconds slower than even time.

Imperatriz looks to be close to her best. She had plenty to chase, yet pinned her ears back and got the upper hand over the last 50 metres. Although the margin was just a head, you could sense that if needed, the reserves were there.

Poly is a cracker

Proving that her Eulogy Stakes (Gr 3, 1600m) win on December 10 was no fluke, Polygon (Highly Recommended) stepped up to the Royal Stakes (Gr 2, 2000m) and gave her fellow fillies a galloping lesson.

She sat second-last starting the back straight and remained second-last at the end of the back straight. The field compacted at the 600-metres and Michael McNab elected not to go wide, instead improving between runners, rounding into the straight. She found a big gap four-off-the-fence near the 200-metres, burst through, charged alongside the leader at the 150-metres then strolled clear for an impressive win.

Trainer Lance Noble admitted to being a smidge concerned during the running, but was full of praise for winning rider Michael McNab post–race. “I was a little bit concerned, but I have to give Michael full credit as he didn’t panic. Going out wide would have been the wrong thing to do so he just had to bide his time.”

Noble added: “We haven’t nominated her for the Oaks, but I think we will be putting a late nom in now” – thinking confirmed by McNab. “I would definitely be looking at the Oaks now. I never touched the bridle the whole race and she just switched off. When I asked her, she just felt explosive”.

Her grandam is by Zabeel (Sir Tristram). Her head carriage is that of a stayer and against her own age group and gender, the 2400 metres won’t be a problem.

Prowess (Proisir), decisive winner of the Auckland Guineas (Gr 2, 1600m), will make the upcoming Karaka Million 3YO Classic (RL, 1600m) more interesting, throwing her hand in against Legarto and Wild Night. Judging from Sunday’s rallying win, who is to say she won’t be competitive?

She took up a handy spot early, sat second to the end of the back straight and on to the 600-metres. Rounding into the straight, she levelled up to the leader and took over from the 400-metres. In front, she looked to hold them comfortably, yet a strong challenge from Waitak (Proisir) appeared from the 100-metres, but she rallied and was too good at the line.

Prowess’s $230,000 purchase by her trainers Roger James and Robert Wellwood is the highest price yet paid for a Proisir (Choisir). That record may well be blown out of the water during this sales series as the Rich Hill Stud representative is on a roll this season.

The unbeaten Legarto is his headliner in a banner season which includes Group 1 winner Dark Destroyer, and New Zealand 2,000 Guineas (Gr 1, 1600m) winner Pier. In Australia, Riodini scored the $1 million Gong (1600m). Look out for last season’s champion sprinter Levante. She has more to say this season.

Prowess took her sire’s individual stakes winners’ tally to 11, and his lead over Savabeel (Zabeel) for the 2022-23 NZ Sire Premiership stands at a shade under $700,000.

Walker credits racing manager Reece Trumper for suggesting the bold, fresh up attempt. Campionessa’s last start was a win over 2500 metres on November 5 in the Metropolitan Trophy (Listed, 2500m) on the first day of the New Zealand Cup meeting at Riccarton.

Walker relates his conversation with Trumper: “’What about the Rich Hill Mile?’ and I said it might be a bit rich, do you think? But, he said, ‘let’s have a crack’”.

“She had freshened up nicely after Riccarton, and looked a bit pretty, I thought, in the parade ring. I think we’ll lift our sights a bit higher after today”, concluded Walker.

Opie Bosson got a great split from the 350-metres and drove the mare through. Gaining quickly, she shared third at the 200-metres, stormed alongside the leader at the 100-metres then went clear for an easy win, her seventh in 18 starts.

The Eclipse Stakes (Gr 2, 1200m), won professionally by the unbeaten Trobriand (Kermadec) may have started Opie Bosson’s day on a superb note, yet the win may also provide something of a headache. Having correctly chosen the winning ride in five of Te Akau’s six, to take the Karaka Millions (RL, 1200m), his challenge is now to decide which of Te Akau’s several aspirants to ride in this year’s event.

Bosson may have given up a clue upon dismounting: “He had to work a bit from the gate, but once he got there, he relaxed beautifully and did the job well. I knew he’d have a good kick, and a strong 1200 metres was right up his alley”.

The winning time of 1:11.4 seconds was not spectacular but he did complete the final 600 metres in 34.4 seconds.

Roger James and Robert Wellwood look to have a strong hand in the upcoming Wellington Cup (Gr 3, 3200m), as promising open class stayer Dionysus (Ocean Park) edged in front late to claim the Queen Elizabeth II Cup (Gr 3, 2400m), his maiden stakes success and fifth career win at start 19. From fourth-last rounding into the straight he kept gaining, up to third at the 200-metres, had a good tussle from the 100-metres but found enough near the line to win by a long neck.

The trainers purchased Dionysus out of the Cambridge Stud draft (Book 1) of the 2019 NZB Karaka Yearling Sale for $45,000. The gelding is stakes winner number 19 for Waikato Stud’s Ocean Park (Thorn Park).

He is from an unraced Tavistock (Montjeu) mare whose dam, La Quinta Gold (Encosta De Lago) is a sister to triple stakes winner Besame Mucho.

Legarto (Proisir) and Wild Night (Vanbrugh) are scheduled to clash in three weeks, on January 21, at the same Pukekohe track where, on Boxing Day they cemented their standings as, perhaps, the best three-year-olds of their gender.

Legarto (five wins in five starts) versus Wild Night (winner of his last five starts), is a match worthy of industry hype. If the Karaka Million 3YO Classic was to be staged on the eve of the 2023 NZB Karaka Yearling Sales, the interest might have gained an even wider audience.

Nevertheless, their meeting is highly anticipated, each very impressive after respective wins in the Eight Carat Classic (Gr 2, 1600m) and the Uncle Remus Stakes (Gr 3, 1400m).

Legarto’s unbeaten record was on the line and her chances looked ominous, when Wessex (Turn Me Loose) set up a huge lead rounding into the straight. At that point Legarto was just warming up. Even when the field straightened, Legarto was giving away at least ten lengths.

Wessex began to shorten stride near the 200-metres but still had a healthy lead, while Legarto lengthened her stride, flying the final 50 metres to score by a length and a quarter, recording her last 600 metres in 33.47 seconds and last 200 metres in 11.41 seconds.

That last figure is identical to Wild Night’s last 200 metres of the Uncle Remus Stakes (1400m), but the gelding’s last 600 metres was faster (33.02 seconds) than the filly’s, keeping in mind that his race was 200 metres shorter.

The several big bounds approaching the 200-metres that Wild Night showed, when winning over 1200 metres at Te Rapa on December 10, were evident again at Pukekohe, but saved for the last 200 metres, where he took over somewhat comfortably against a good line up.

Legarto is sure to improve from her run, her first since a scintillating win in the New Zealand 1,000 Guineas. Wild Night will be trying 1600 metres for the first time, but the way he runs out his races, the extra distance looks right up his alley.

For both, the experience of racing clockwise was their first, the long Pukekohe straight allowing ample time for them to balance and run home.

New Zealand racing needs exactly this type of match up, so, set your DVD recorders. This race could be one for the ages.

Sometime this year, Savabeel will assume second place on the New Zealand all-time list, headed by his sire Zabeel (Sir Tristram) whose total of 166 is pretty safe for now.

In a world totally dominated by the Northern Dancer sire-line, it is significant that here in New Zealand we should buck the trend. Nowhere else has the Sir Ivor (Sir Gaylord) lineage been so successful. That the top three are three successive generations of the same line is outstanding.

Synchronize has had her issues, including an enforced break due to bleeding, but her recent win as well as her record of four wins in eight starts, suggests that more can be expected. The field she beat was disappointing in strength, but her fractionals were very good.