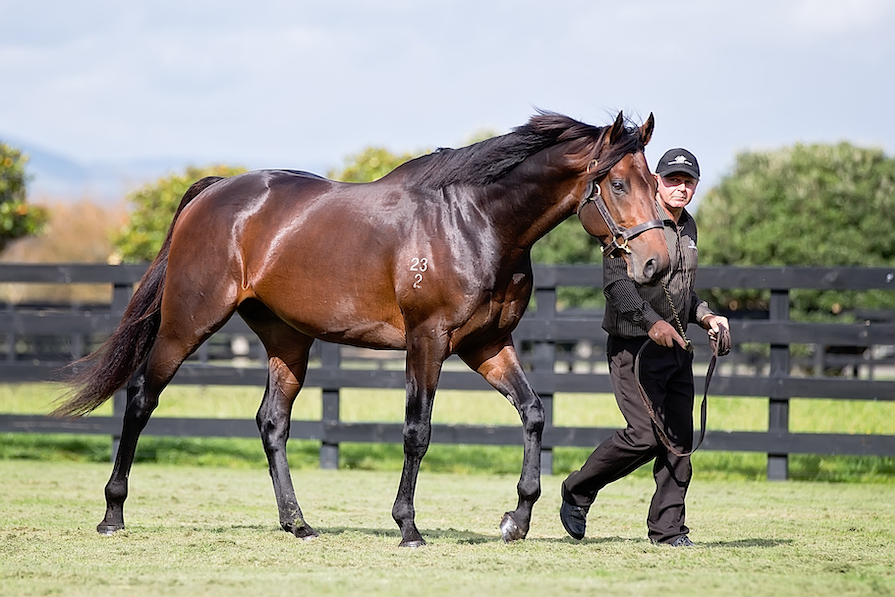 Tarzino (Tavistock) has already made an impressive impact at the highest level and Westbury Stud are confident the best is yet to come for the young stallion.

The son of Tavistock (Montjeu) and the Zabeel (Sir Tristram) mare Zarzino ran up to his own rich pedigree with success in the  VRC Derby (Gr 1, 2500m) and Rosehill Guineas (Gr 1, 2000m) and first-crop representatives have followed suit.

Gypsy Goddess claimed top honours in the Queensland Oaks (Gr 1, 2400m) while Jungle Magnate triumphed in the South Australian Derby (Gr 1, 2500m) before his sale to Hong Kong where he races as Beautyverse.

“As you would expect, his progeny should continue to get better as four and five-year-olds.

“I’ve been very heartened by the feedback I’ve had from Hong Kong on Jungle Magnate and he seems to be the horse they are looking toward to be a leading contender for the Hong Kong Derby.

“If we were lucky enough to pull that off it really cements where Tarzino is heading.”

Tarzino will be represented by 14 youngsters in Westbury’s draft at the upcoming New Zealand Bloodstock Yearling Sale and the farm has been buoyed by the stallion’s popularity at the recent Magic Millions Gold Coast Sale.

“It’s probably not a sale that’s ideally suited to staying types like the Tarzinos, but we went there with three horses and averaged $227,000,” Warwick said.

A favourite among the Karaka-bound consignment is a daughter of Tarzino, Lot 515, who is a half-sister to the Desert Gold Stakes (Gr 3, 1600m) winner Showbeel (Savabeel).

“This filly is out of Showileo and she’s very well-bred with the dam a Galileo mare and you could just imagine her being a lovely Oaks filly down the track and she’s got the presence to go with it,” Warwick said.

“She’s very much a nice staying type of filly and with a pedigree that has been highly successful.”

Among the colts, Tarzino’s son out of the More Than Ready (Southern Halo) mare Willamette is expected to be popular when he goes through the ring as Lot 639.

“His three-quarter made $170,000 last year at the Magic Millions where Mick Price bought him,” Warwick said.

“This one is a nice horse, a first foal who is very athletic and very much in the Jungle Magnate mould and we’re optimistic that buyers will be drawn to him.”

“He served in the mid-180s, which is a significant book and more than we intended,” Warwick said.

“We had set a benchmark of 150 for him, but two deciders that allowed us to cover more with him was the demand with quality mares and the second was his fertility.

“He has something like 165 mares or more in foal so he’s got a very high fertility rate.

“It’s one step at the time, but at the moment we are extremely enthused how he is going and hope he continues to do so in the weeks and months ahead.”

Outside of the Tarzino line-up, Warwick is keen on the prospects of a Proisir (Choisir) colt, Lot 553, and a daughter of Russian Revolution (Snitzel), who will be offered as Lot 322.

“Proisir is obviously the flavour of the moment and he’s grown into a nice horse and the Russian Revolution filly is out of a High Chaparral mare and I’ve been quite taken by her and the way she has come through the preparation,” Warwick said.

Westbury has also enjoyed a good degree of success on the track in the last 12 months.

“We have had a pretty good run with three Group 1 winners, Jungle Magnate, Mascarpone and Sharp ‘N’ Smart, and that’s our job to produce top racehorses,” Warwick said.

“It’s quite rewarding to get three individual Group 1 winners, but you don’t rest on your laurels and it’s about how do we make it three or four in the next year.”