What have you done for me lately? 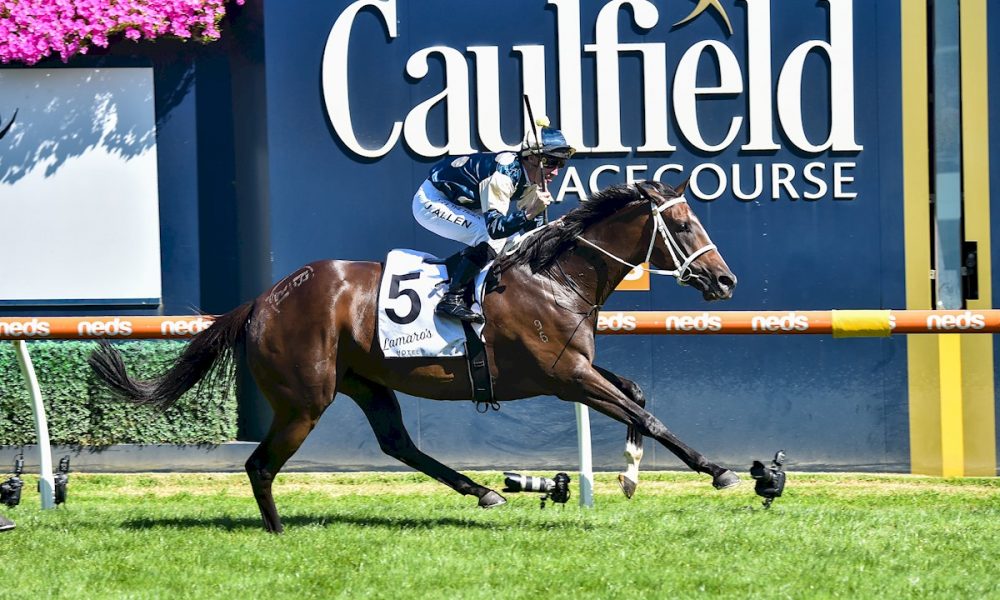 This week’s title is an Americanism the writer discovered while living in the USA: “What have you done for me lately?”

Almost a back-handed compliment, the comment conveys that older favours fade and that only current favours are worthwhile. It might also be interpreted as: “My memory is not so good, so remind me again?”

If buyers want “current”, or a reminder, just take a close look at the New Zealand industry’s super results from Saturday’s racing in Australia, Singapore and here at home.

With less than a week before the delayed New Zealand Bloodstock Karaka Yearling Sales kick into gear, these results could not have been more timely.

Let’s summarise the results from Australia on Saturday:

Verry Elleegant (Zed) showed the heart of a lioness and defiantly held out a strong challenge to land her eleventh Group 1 against a stellar field in the Chipping Norton Stakes (Gr 1, 1600m).

Sierra Sue’s co-trainer, expat Natalie Young, gets it. She knows how important the breeding industry is to New Zealand, as per her comment: “Now she’s a multiple Group 1 winner and she’s a valuable mare. A Darci Brahma from New Zealand, so she’s flying the flag for the Kiwi breeders.”

The late Tavistock (Montjeu) sired Mannerism Stakes (Gr 3, 1400m) winner Flying Mascot, her second Group 3. Tavistock will have his last, and much smaller, crop go through the ring next week. Sticking on well for third was the New Zealand–trained and bred mare Kahma Lass (Darci Brahma).

Defibrillate (Shocking) bagged his second stakes win when taking out the Mornington Cup Prelude (Listed, 2000m) for the second year in a row. His sire, Shocking (Street Cry), is represented by 11 lots at Karaka.

In the Autumn Classic (Gr 2, 1800m), the first and third home are out of New Zealand-bred mares. The winner, Castlereagh Kid (Snitzel), is from a Zabeel (Sir Tristram) mare, while third was El Patroness (Shamus Award) whose dam is by O’Reilly (Last Tycoon). Splitting them was New Zealand-bred Lucky Decision (Zacinto), also out of an O’Reilly mare.

Third to the flying Marabi (I Am Invincible) in the Oakleigh Plate (Gr 1, 1100m) was Oxley Road (Exceed And Excel). His dam is the Thorn Park (Spinning World) Listed winner Bonnie Mac.

Boom filly Espiona (Extreme Choice), a powerful third in the Surround Stakes (Gr 1, 1400m), is yet another from an O’Reilly mare.

Third in the Guy Walter Stakes (Gr 2, 1400m) was Vangelic (Vancouver), whose dam is by Pins (Snippets), and third in the Sweet Embrace Stakes (Gr 2, 1200m) was Lady Laguna (Overshare), who is from the New Zealand–bred Catalina De Lago (Encosta De Lago).

Over in Perth in the Ascot One Thousand Guineas (Listed, 1800m), the Bob Peters-bred filly Fine Romance (So You Think) finished second. She was foaled in New Zealand and third home was Kiwi-bred Kia Ora Jewel (Turn Me Loose).

In Singapore, four of the card’s winners were either bred or sourced in New Zealand. Fireworks (Ekraar) was bred in New Zealand, so was Born To Win (Haradasun), who went through the Karaka sale ring. Kiwi-bred Luck Of Master (Mastercraftsman) and Australian-bred Lim’s Spin (Stratum) are both graduates of the NZB Ready to Run Sale.

Casting an eye over the above summary reveals that, while the Kiwis are renowned for producing stayers, or certainly stock that perform better when tasked with distances beyond 1600 metres, many results are, significantly, at 1400 metres.

Even though Pencarrow Stud does not stand any stallions, its influence in the stallion world stood out on Saturday.

Their homebred Darci Brahma (Danehill), also a Te Akau star, had a day to remember. Not only did he sire Sierra Sue to register her second Group 1 this season, his Classic-winning daughter Kahma Lass continued to be competitive against Melbourne’s better mares with a solid third in the Mannerism Stakes.

Is it too late to hunt down a Darci Brahma mare? His future in that category is more than promising judging from the good win by Finance Tycoon (Written Tycoon) in the Zeditave Stakes. A Group 3 Flemington winner at two, he appears to be going on with it. His dam is by Darci Brahma.

His mares have a further eight Group or Listed placed performers, six of which are three or younger, to keep his name to the fore.

Referencing Darci Brahma’s deeds as a broodmare sire should not be misinterpreted. To the contrary, he remains a force and Sierra Sue is a great example of his continuing prowess. He has eight lots up for grabs at next week’s sale.

After Sierra Sue’s September Group 1, Kiwi Chronicles spoke with The Oaks Stud’s Rick Williams whose first comment was that Darci Brahma’s statistics are “through the roof.” Underrated is an understatement.

He may be 19 but is in great health and is the sire of 99 black type runners, comprising 55 stakes winners of which 12 have succeeded at Group 1 level. An ultra-consistent sire, if not for O’Reilly and Savabeel (Zabeel), he would have four New Zealand sire premierships to his good name.

Good luck getting a Darci Brahma yearling for even fifty times the price that Sierra Sue fetched. It is well documented that Sierra Sue was sold for an astounding $2,000 as a broken-in two-year-old. Full credit to Peter Lock and subsequently agent Phill Cataldo for seeing an incredible opportunity when others weren’t paying attention.

Maven Belle gave her opponents little chance over the last 200 metres of Saturday’s Matamata Breeders’ Stakes (Gr 2, 1200m), racing away to remain unbeaten in three starts. Her dominant effort backed up the filly’s Group 3 victory in the Taranaki 2YO Classic (1200m) two weeks ago at Te Rapa.

Her dam is a half-sister to the country’s top sprinter and back-to-back Group 1 winner Levante (Proisir), who has an appointment in Melbourne next month over the straight six furlongs at Flemington in the Newmarket Handicap (Gr 1, 1200m).

Seven of Burgundy’s eight stakes winners have scored at Group level and include this season’s stakes winners Bellaconte and Mondorani, the latter successful over 3200 metres in the New Zealand Cup (Gr 3).

In five and a half seasons he has sired 89 individual winners and two of his final crop will be offered next week at Karaka. Lot 400, from Prima Park, will no doubt be very popular being the half-sister to top sprinter Entriviere (Tavistock).

Darci Brahma is Grand Echezeaux’s first foal, born in 2002, whereas Burgundy, her fifth foal, came along in 2008. From seven to race, she produced five winners, four of which earned black type. Darci Brahma was the standout.

A Classic winner of the New Zealand Two Thousand Guineas (Gr 1, 1600m), his ten wins included five at Group 1 level and he had the brilliance to capture Trentham’s speed test, the Telegraph Handicap (Gr 1, 1200m).

Burgundy’s premier performance among his seven victories was the Cambridge Breeders’ Stakes (Gr 3, 1200m), adding four Listed wins to the Group 3. He too ventured to Trentham and was third in the Telegraph.

Sir Patrick Hogan was sufficiently impressed with Burgundy’s ability, as well as his superb bloodlines no doubt, to warrant his chance of a stud career. The industry knows all too well that we lost the stallion before he could establish himself. His results so far give more credence to that fact.

Including herself, Richebourg is responsible for 25 stakes horses, which includes 15 stakes winners since being in the Vela brothers’ ownership. In five generations, she is the ancestress of more than 80 individual winners and has created a strong family.

Two fillies from this line will be offered next week. One is Lot 217 from Blandford Lodge’s draft, a Snitzel (Redoute’s Choice) filly from dual Group 3 winner Eleonora (Makfi), a granddaughter of Ethereal. Expect this filly to be very popular as she is highly commercial.

The other filly, along with five colts, is being offered by Pencarrow itself. Lot 596 is similarly highly desirable being an I Am Invincible (Invincible Spirit) half-sister to triple Group winner Supera (Savabeel) and to Eleonora (above). It will be a surprise if this filly isn’t one of the top five lots of Book 1. She has the sire and the pedigree, combined with the fact that buyers will enjoy great future residual value from a rare opportunity to buy into this family.

Of Pencarrow’s five colts, Lot 595 is sure to command lots of attention as he is by The Autumn Sun (Redoute’s Choice), whose stock have sold exceedingly well so far in this selling season. The colt is from a four-race winning High Chaparral (Sadler’s Wells) half-sister to Supera and Eleonora (above).

That is the description of champion trainer Chris Waller after Verry Elleegant defied a quality field over the last 50 metres of Saturday’s Chipping Norton Stakes.

Exhibiting the heart of a tigress, she repelled a very strong late challenge from She’s Ideel (Dundeel), digging deep, as champions do, to add an 11th Group 1 to an already super impressive race career.

“She’s a real piece of work, she fights like a tiger,” said Waller. “There are no other words for it, but she is freakish.”

Waller’s thoughts were echoed by rider James McDonald, who said: “For her to pull out all stops at these kinds of trips is incredible. She’s a star, she’s an absolute star. I’m so lucky to be a part of it.”

Why plus? Verry Elleegant’s sire Zed (Zabeel) is a great grandson of Cotehele House (My Swanee), the first foal of the great Eight Carat (Pieces Of Eight).

Verry Elleegant’s dam Opulence (Danroad) is a great granddaughter of Cotehele House, which means she is bred 3×3 to Cotehele House and 4×4 to Eight Carat.

The yearling is by Zed out of Hermione, a Viking Ruler (Danehill) half-sister to Verry Elleegant’s dam Opulence, so, also bred 3×3 to Cotehele House and 4×4 to Eight Carat.

Here’s the plus: Hermione’s sire, Viking Ruler, is a grandson of Eight Carat’s second foal, Railway Handicap (Gr 1, 1200m) winner Diamond Lover (Sticks And Stones). Opulence and Hermione are both by sons of Danehill (Danzig). The result: Lot 293 is bred 4x4x4 to Eight Carat.

Another Book 1 offering which may benefit from a timely update is Westbury Stud’s Lot 261, the Reliable Man (Dalakhani) half-sister to new Group 1 winner Mascarpone (Shooting To Win).

Twice third in Group 1 sprints in his two starts prior to Saturday’s Otaki WFA Stakes (Gr 1, 1600), the five-year-old broke through for his maiden Group 1 and much deserved victory as he had accumulated four previous elite-level placings.

He led narrowly early but broke away by more than two lengths inside the 1000 metres. The lead shrunk to less than a length rounding into the straight where rider Wiremu Pinn steered him wider to be out in the centre of the track from the 300 metres. Travelling boldly, he remained in front to the 200 metres, was challenged on his inner but was going too well and strode clear again for the two–length win, his career eighth at start 26.

Windsor Park Stud’s Turn Me Loose (Iffraaj) received a timely boost to his sale prospects when his son Alabama Gold bolted away with the Matamata Slipper (Gr 3, 1200m). As mentioned above, Turn Me Loose’s daughter Kia Ora Jewel ran third in the Ascot One Thousand Guineas over in Perth later the same day.

The champion sprinter-miler’s second stakes winner, the first being Turn The Ace, Turn Me Loose’s oldest progeny are three-year-olds, which also include four black type–placed runners. He is strongly represented next week with a total of 28 lots, 11 of which are in Book 1.

Attendance at the Karaka Sale means that Kiwi Chronicles is taking a break next week.