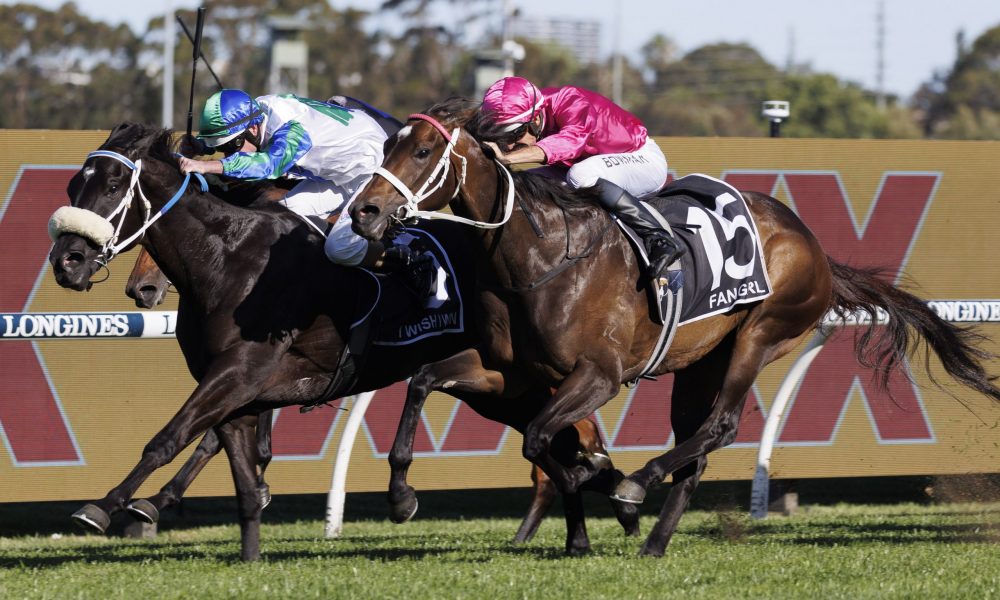 Social media lit up with epic scenes of celebration at Waikato Stud after I Wish I Win (Savabeel) landed the $10 million Golden Eagle at Rosehill on Saturday.

Mark Chittick, the principal of the leading New Zealand thoroughbred nursery was hosting a Derby Day party for friends, family, and staff at the farm, and soon after the horse crossed the line, he excitedly cracked open a bottle of champagne and sprayed the group like an F1 driver would after a Grand Prix win.

He had every reason to be so exuberant, after all, I Wish I Win is a homebred and races in the iconic white, green and blue colours of Waikato Stud.

But the four-year-old is not just any home bred, he’s a young horse who is not only proof that logic can occasionally be totally defied in the thoroughbred racing and breeding business, but that faith, time, patience and a bit of problem-solving can take a horse a long way.

“For the whole team it’s our life, it’s everything every minute every day. With that horse, it’s been well documented his history, so that minute-and-a-half or so of the Golden Eagle was quite incredible. It was one of those once-in-a-lifetime situations,” said Chittick.

I Wish I Win was born a slightly built type of foal with a badly bent near foreleg. Unsaleable; Chittick kept him hidden in a paddock behind some hedges during his early days. And while he grew out nicely on the lush pastures of the Waikato, nothing was ever going to change his wonky leg.

“I didn’t know whether to laugh or cry when he was born. His legs went in all directions. It was extreme.”

For most, the temptation would be to call on veterinary intervention to correct them. But Chittick resisted.

“I’m a believer at the end of the day, when you are breeders you get what you are given. You don’t have a lot of choices and we do like rearing our horses as naturally as possible. There are the likes of peri-strips and screws and it’s not that I’m not a believer, but I think the horse was made that way and that’s how he’s going to make those legs operate. Fortunately, he has a big heart and operates them pretty well.

“We let them grow out as naturally as possible. He’s got an incredible heart and brain.”

The good judgement of Kiwi horse breaker Jamie Beatson has also been crucial in the journey of I Wish I Win to stardom. It was he who inspired Chittick to keep pressing on with the horse despite his major confirmation issues.

“I remember when I first took the horse to Jamie to be broken in that before dropping the truck door, I said you have a special here don’t laugh when I get him off.

“In the end when Jamie got him going, he said he moves alright. He doesn’t know he’s got crooked legs and when you ride him you don’t know.”

The rest, as they say, is history and I Wish I Win now sits in the record books as a winner of Australia’s second-richest race – the Golden Eagle.

“It’s a great story. He doesn’t know the story, but it’s a fairytale and he’s created it. He’s a sound horse even though he has funny legs and there’s a whole lot in front of him.”

Under the guidance of champion trainer Peter Moody, I Wish I Win unquestionably has an exciting future ahead. Moody and Chittick are great old mates from way back and that connection has been a big influence in the emergence of this horse.

“Peter spoke to me about the potential to buy the horse to race in Australia. I explained he was unsaleable. We had a yarn about him going over there and came to an arrangement and that’s why his name is in the ownership. There were limited opportunities for him in NZ and I honestly thought we would be sending him over for $150,000 – $200,000 races, not the top-tier stuff. But far out, after Saturday he certainly proved me wrong there which is great.”

Like many, Chittick was rapt to see the old firm, Moody and jockey Luke Nolen, back in force on Saturday.

“Moods and I have been mates and done bits and pieces together for many years. We are of the same era as the likes of John O’Shea and Danny O’Brien. We are all good mates and come through the game and forged our way together in many ways.

“It’s pretty cool and enjoyable to do it with Moods. He has mares here on the farm and we have horses in work with him. As we all know, he’s a hell of a good fella and it was very exciting on Saturday.”

It sure was exciting and we can’t wait to see what the next instalment in the story of I Wish I Win brings. One thing’s for sure if the horse wins again there will be plenty of commotion at Waikato.