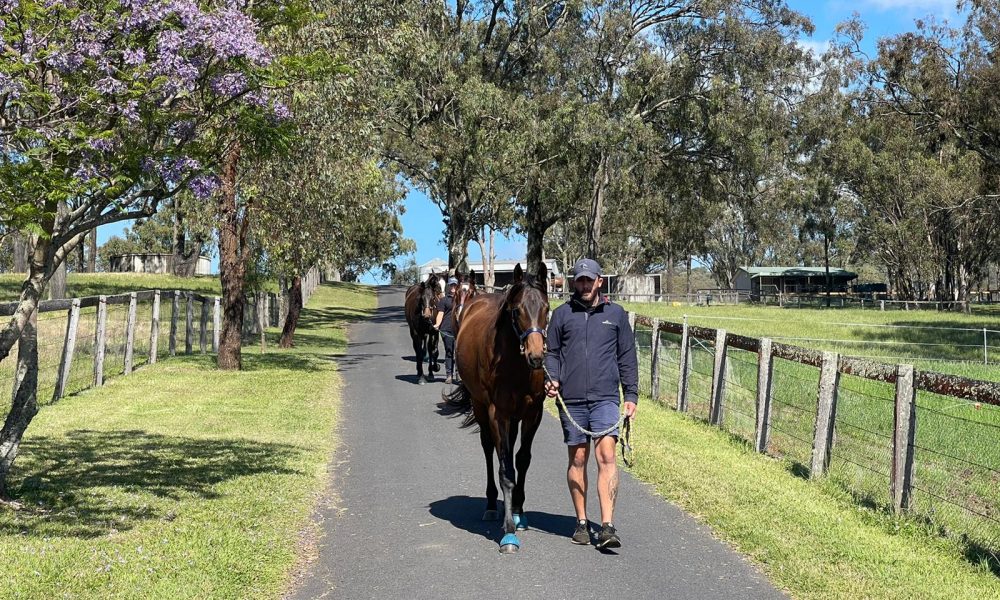 This week, Jo McKinnon paid a visit to Willow Park Stud in the Hunter Valley to take a first-hand look at the progress of their draft of ten yearlings being prepared for the 2022 Magic Millions Gold Coast Yearling Sale.

Jo spoke with stud manager Jade Rossington as the youngsters that have now been in for two weeks went through their daily morning ritual on what was a superb spring day.

Jade, what have the horses been up to since we caught up with you last week?

The horses have had their walker time increased from 20-30 minutes daily. A couple of them have had their feed adjusted and a couple of lighter ones are getting more feed. The heavier ones are getting hay nets introduced instead of ad-lib hay they now get half a biscuit three times a day. That’s what’s changed as far as feed and work go. They also started doing practise parades for inspections and have all been bathed again this week.

We have also been plaiting their manes over onto the offside to train their mane to go on the right side.  They have also had the chiropractor, Brett Myall, visit this week to go over them all and if there’s an issue he will fix them. You often find there are a few issues as they might have played rough in the paddock or they had a little accident as a foal and he puts them into place.

Obviously, some horses are starting to vary in terms of their progress at this stage. Are you starting to see a few differences in conditioning and their coats?

Is there a regimented process when they are caught in their paddocks and brought into the stables for their exercise and handling?

Every moment that we are with them we try to walk them like they are being shown and walk them properly and, even if you are standing up and waiting for one to walk out of a gate, stand them up. The whole time we are concentrating on the horse and they thrive on the routine and we stick to it. The only time it’s disrupted is when they have early parades and they will have to be worked after the parade. Sometimes it reflects on their behaviour out there but generally, they are pretty good.

The hill they have to walk up and down to and from the paddocks seems to be beneficial?

I think it’s very good for them practising walking and their manners as well and for their topline and it’s good for staff fitness as well. It teaches the horses to walk out properly and drop their head and relax and stroll along nicely.

How do you prepare for when trainers and agents come to inspect them?

Obviously, the horses have to be spot on. Most of the staff have been here a little while and shown yearlings before so they don’t need too much fine-tuning but one girl on our team hasn’t done sales or yearling prep before so Brett Wise has shown her what to expect.

What are the main things you try to emphasise as important? People can have different styles of showcasing a yearling but what do you try and instil in the handlers?

You want the horses to walk out well and be relaxed, I think they are the main two things. A nice, fluent walk and also relaxed at the same time. You don’t want your horses going out there and being too naughty because buyers can’t get a good look at them and it’s not a very good look as they might think it’s an indication of temperament. That’s why we practise and if there is one that’s naughty we will take it back out again in the afternoon and get it more used to the surroundings and focused on their leader.

What specifically do you teach the handlers?

We tell them that if they are relaxed, the horse is. We have them on a pretty loose lead and keeping them relaxed is the key to walking out nicely and we want them to stop and come forward when you ask and go back when you ask and stand still for the 30 seconds someone might be looking at them.

How much effort goes into the actual positioning and surface of the parade area?

The gardeners keep on top of the surface, which is fairly new turf that was put in 12 months ago. They take great pride in keeping it well-manicured. If they chop it up they won’t be happy but we make sure it’s in top condition. We keep it quite short so you can see the hooves and whole leg and it’s very flat, too.

How much do you think these early parades influence the decision making of buyers ahead of the sales?

A lot of them make a shortlist off this inspection so it’s very important. Because there are 1,200-1,500 horses on the Gold Coast they don’t have enough time to get around and look at them all up there so they will come to the Hunter and get a lot of the drafts out of the way. Every horse you want to show off to the best of their ability.

It’s beautiful weather here this morning and it’s been a lovely season with plenty of feed around. Are you seeing that reflected in their progress at all?

They came in looking really well in condition and in their coats, which is a reflection of the feed that’s around, but you have got to make sure they do not peak too early before the sales.