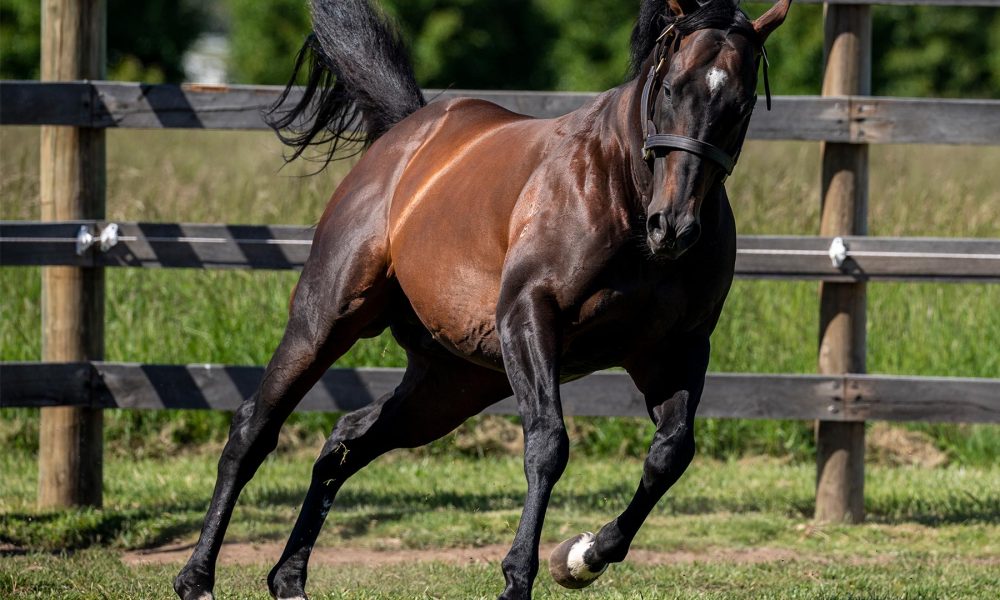 Adelaide’s 2500-metre Classic would prove a milestone victory for stallion, who is represented by Harleymoven and Sebastian The Fox

The odds boards for this historic Classic, a year older than the Melbourne Cup (Gr 1, 3200m), have been dominated by Godolphin’s Alegron (Teofilo), as well as Detonator Jack (Jakkalberry). The latter unbeaten gelding is seeking to repeat the success in the race last year achieved by Jakkalberry-sired Explosive Jack, the Ciaron Maher and David Eustace stable and jockey John Allen.

But Foxwedge, whose furthest success on the track came over the 1200 metres of his sole elite-level win in the 2012 William Reid Stakes (Gr 1, 1200m), and who has only one of his sired 24 stakes-winners succeed at further than 2000 metres, has a surprising two chances in the race.

Trained by Dan Clarken and Oopy MacGillivray, Harleymoven posted his staying credentials with his second straight win two starts back, in the Port Adelaide Guineas (Listed, 1800m), before a fast-closing second in the Chairman’s Stakes (Gr 3, 2000m), behind a Derby rival in Jungle Magnate (Tarzino).

The gelding, who fell $5,000 short of a $50,000 reserve at the Adelaide Yearling Sale in 2020, was bred by South Australia’s Mill Park Stud out of Inishmore – an unraced daughter of a sire known mostly for speed, More Than Ready (Southern Halo).

Sebastian The Fox, owned by a diverse syndicate including auction house byword Arthur Inglis, former flamboyant AFL star Peter “Crackers” Keenan and triple Macau champion jockey John Didham, is an outsider not just by starting gate – having drawn the widest of the 20 including emergencies – but by his quote of $101.

Prepared at the small 30-horse Ballarat stable of Shay Keating, and to be ridden for the third time today by Jake Noonan, the gelding is from a Hawkesbury-winning mare High Above (High Chaparral), who scored at up to 1600 metres.

Sebastian The Fox (named after an old Australian children’s TV show from Dodemaide’s youth) comes in off a fourth of five in a 2255-metre Geelong Benchmark 64. However, he finished only half a length behind another of today’s rivals in Water Into Wine (Sir Prancealot) that day, having won over 2000 metres before in a Kilmore Benchmark 58.

That’s a formline well short of the likes of Alegron, who was second in the Victoria Derby (Gr 1, 2500m) and third in Randwick’s version (Gr 1, 2400m) before a last-start stroll to victory in the VRC St Leger (Listed, 2800m) when odds-on.

But Dodemaide remains quietly confident both Sebastian The Fox and Harleymoven can provide a worthy representation of their sire’s staying credentials today.

“As a general rule, you’d probably think Foxwedge’s offspring are best up to a mile,” Dodemaide told ANZ Bloodstock News, on his drive from Victoria to Adelaide yesterday. “But he’s one of those stallions who – if you put something with a bit of longer-range ability to him – he can leave something that sticks on a bit.

“Like Sebastian The Fox, who’s out of a High Chaparral mare, who’s out of a Zabeel mare. If you put something with a little bit of stoutness on the dam’s side, you can get them to stretch out a bit. That said, Harleymoven is out of a More Than Ready mare, and he was a speed horse who’s left Golden Slipper winners (Sebring, Phelan Ready). So you wonder how that’s happened, but then Foxwedge is by Fastnet Rock, who could sire anything.”

Foxwedge, about to stand his fourth season at Woodside after his first seven at Newgate Farm, has sired five Group 1 winners. One win came through his three early years shuttling to Europe through the mare Urban Fox in the 2018 Pretty Polly Stakes (Gr 1, 1m 2f) at the Curragh. That remains the sire’s longest stakes winner to date, while two have come in the 1800 to 2000 metres range.

The rising 14-year-old’s other elite-level winners have been Foxplay, in the Queen Of The Turf Stakes (Gr 1, 1600m) at Randwick, Lunar Fox in the Australian Guineas over the same trip, Volpe Veloce in Ellerslie’s Railway Stakes (1200m), and the Mill Park-bred Run Fox Run, who was exported to South Africa and won Kenilworth’s 1000 metres Cape Flying Championship last year.

Foxplay and Volpe Veloce – who also won four stakes races over 1600 metres – descend from Sadler’s Wells (Northern Dancer) damsires, respectively El Prado and Barathea. So does Sebastian The Fox, via High Chaparral, something Dodemaide believes could be a key.

“That Sadler’s Wells’ line looks a bit proven to work well with Foxwedge,” said Dodemaide, convinced his $11,000 stallion – Australia’s champion second-season sire when Foxplay did his bidding in 2016-17 – is underrated.

“He’s a very good-looking horse. He was the third-top priced colt at his Easter yearling sale ($925,000 in 2010), and because of that, when you breed to him you’re pretty sure of getting yourself a nice yearling.

“We got him three years ago when he had 11 stakes winners, and now he’s had 13 more, so he keeps going along nicely.”

Dodemaide, whose stud has added Vancouver (Medaglia D’Oro) and sprinter-miler Delaware (Frankel) this year alongside Rich Enuff (Written Tycoon) and Tosen Stardom (Deep Impact), realises Sebastian The Fox has the odds against him today. But he has various strains of inspiration to look to.

There was last weekend’s sensational 80-1 Kentucky Derby (Gr 1, 10f) winner Rich Strike (Keen Ice). Also in the month of May, in 2016, Leicester City (the Foxes) pulled off one of the biggest shocks in sporting history by winning the English Premier League, having been quoted a 5,000-1 chance at the start of the season. And there was another omen just yesterday.

“We were driving towards Adelaide just near Keith at about 1pm and this fox ran across the road right in front of us,” Dodemaide said with a laugh. “You don’t see that sort of thing in the middle of the day very often!

“But yes, the Kentucky Derby winner last week was outside barrier and 80-1, so anything can happen. But I guess Sebastian’s big chance is, we think he’ll get the distance and we know some of the others won’t.”

In today’s other Group 1 – the Doomben 10,000 at Eagle Farm – Darley’s rising 24-year-old sire Lonhro (Octagonal) has the chance for his first elite-level success in more than three years, in what was once considered the most unlikely of sources: Kementari.

The seven-year-old, who returned to racing as a gelding after being found sub-fertile in a failed stud career, is second-up after a thrilling rails victory in the Hall Mark Stakes (Gr 3, 1200m) at Randwick – his third Group 3 win to go with two Group 2s and his top-tier success, in the 2018 Randwick Guineas (Gr 1, 1600m).

Lonhro, who has sired 94 individual stakes winners worldwide and 12 individual Group 1 winners after 18 seasons at stud, and will stand again this spring for $55,000, reduced from $66,000 (all fees include GST), had his last elite-level victory when Lyre won the 2019 Blue Diamond Stakes (Gr 1, 1200m) at Caulfield.

Kementari was last night a $6.50 second-favourite for the $1 million weight-for-age Doomben 10,000 behind exciting Maurice (Screen Hero) three-year-old gelding Mazu – chasing a sixth-straight win in his first attempt at a Group 1 – at around $3.