Yearlings contend with ‘worst in decades’ flooding in Hunter 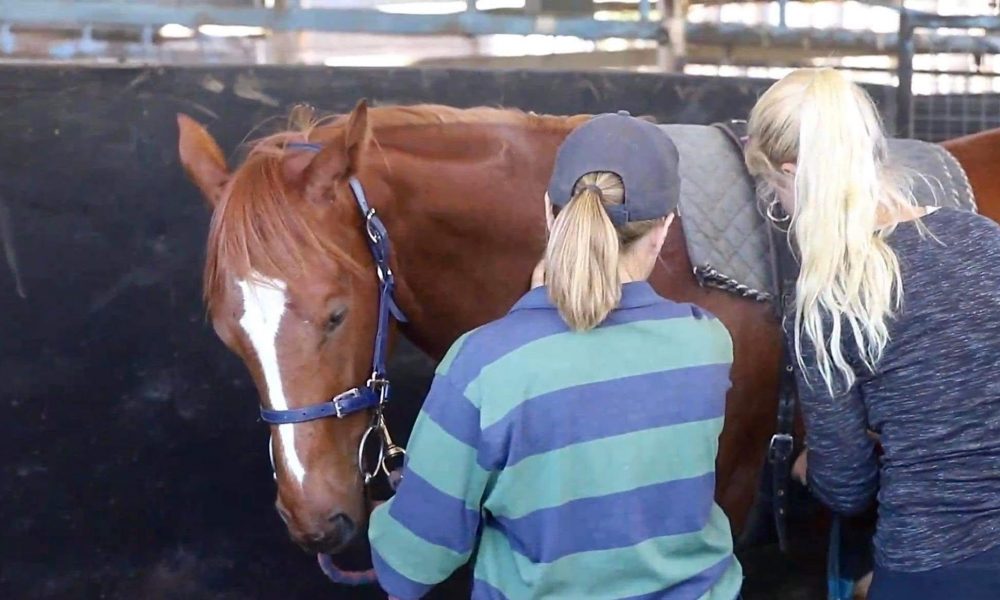 In recent days parts of Australia’s thoroughbred breeding heartland in the Hunter Valley of NSW were hit by the worst rain event experienced in decades.

The deluge caused flash flooding and serious disruption to some of the region’s biggest farms, including Willow Park Stud located just outside of Scone, whose draft of yearlings are the subject of our weekly insights into the preparation of young horses for the 2022 Magic Millions Gold Coast Yearling Sale.

Incredible social media images shared by Willow Park painted a vivid picture of the impact of the 115 millimetres of rainfall that has been recorded at the farm since last Thursday. This came on top of the 70 millimetres they received there last weekend.

The crazy, unseasonably wet weather and its resultant floodwaters have meant that parts of the farm were completely inaccessible to outside staff and Jo McKinnon’s planned visit for ANZ Bloodstock News had to be cancelled.

So instead, she caught up with stud manager Jade Rossington remotely to discuss their yearling draft’s progress during the tumultuous fourth week of their journey to the Gold Coast in January.

Jade, have you ever known a weather event quite like this during Spring at Willow Park?

I don’t know that there has ever been a rain event that bad or certainly not while I have been there anyway. It’s the worst in decades. Scone copped it and it’s definitely the worst since I have been at Willow Park. I live on the other side of the farm and couldn’t get in and nor could the other staff who live outside the confines of the farm so they had to make do with the staff that live in the middle of the farm. It’s amazing how high the creek got. In the end, we only had a couple of fences that have gone, there are plenty who are worse off than us. We moved horses that were on lower ground and in a pool of water up to their fetlocks and got them onto higher ground and touch wood we had no injuries. It was only yesterday afternoon that they were brave enough to take 4WDs and the horse truck back through the farm. So it’s getting better slowly.

How much disruption did it cause to the work with the Magic Millions’ yearlings this week?

For some reason, the power tripped out on the walker so that’s been a bit destructive but they are still going out for their morning run. We like to put them out come rain, hail, or storm so their routine hasn’t changed too much. We are also lucky we have a good cover of grass on the ground so it’s not too bad and as slippery as it could be when it rains during a drier season. The worst thing they can do is pull a shoe off but that usually happens when the ground starts to dry off and becomes gluggy.

With the unseasonal wet weather, how much have things changed as far as rugging and grooming of the horses go?

The weather has been unusually tricky for this time of year! Normally by now, we would have had several 40-plus degree days, but this year it’s humid and rainy. Our horses still go out for their morning runs in yards despite the wet and muddy conditions, but there is a lot more rugging occurring than there usually is. They are still in their hessian rugs at night time. The yearlings have also had several grooms by now, which involves a curry comb (elbow grease is the key), hot towel, dandy brush, mane/tail brush out and their hooves picked.

Now we are at week four, how much of the uniform approach to their preparation has changed or had to be tweaked individually?

Generally speaking, we are happy with how the draft is coming along. It’s time to pick out those that require a little more fine-tuning. I recall years ago a leading trainer describing a certain farm’s draft as looking like a mixed fruit basket, and we don’t want that. We want them all to be similar in condition and every single one to look the very best they possibly can.

We have one colt that doesn’t carry himself particularly well, he has a high head carriage and as a consequence, he is using all the wrong muscles and we aren’t happy with his shape. This week we have placed a roller on him, initially, this is done in the space of a round yard (rather than a walking machine), so if he detests it and has a buck, the handlers can get away safely. He wears protective leg boots and has his shoes taped up to prevent injury and losing his shoes. Once he gets accustomed to it, it will be placed on him in the walker daily, he will have side reins added and they’ll be connected to a mouthing bit. This will encourage him to work in a frame and work the right muscles, to develop a nice, well-balanced appearance.

We have another colt that is in great condition, and well balanced, but just lacks a bit of overall strength. This week we have introduced him to lunging, similar to putting a roller on. We boot them up and put tape on their feet and shoes for the same reasons mentioned. This week has been more about teaching him how to do it, but going forward he will have five minutes each way lungeing (at a trot) a few times a week. We lunge in deep sand, at a working trot which is excellent for their muscles.

Has anything in particular surprised or challenged you with their preparations this week?

Normally we would not be rugging at all because it would be just too hot. That’s the main difference between this and any other prep we have done. So far we have only had a couple of days get into the early 30 degrees and by now we would usually have had a couple in the forties.

I think it will be harder to get their coats right but when they get to the Gold Coast they will lose a lot of hair up there and really finish off. Being colder this year,  it will be tougher.

How many on-farm inspections do you have coming up?

There are none booked this week but over the following two weeks, we will have at least eight groups. Some come as individuals but there are quite a few that will come through as groups.

Does this buy you some more valuable time to get them looking right?

Definitely. I’d much rather they come a bit later, as the later it is the better they look. We are, after all, targeting them for mid-January and there’s a lot of changes still to happen.

Next week, weather permitting, ANZ Bloodstock News will venture to Willow Park Stud for the yearling draft’s second visit from the farrier and we will check in on how the colt is adjusting to his work with the roller.

Plus, we will meet Jade’s righthand man Brett Wise and get to know his background and passion for preparing sales yearlings.