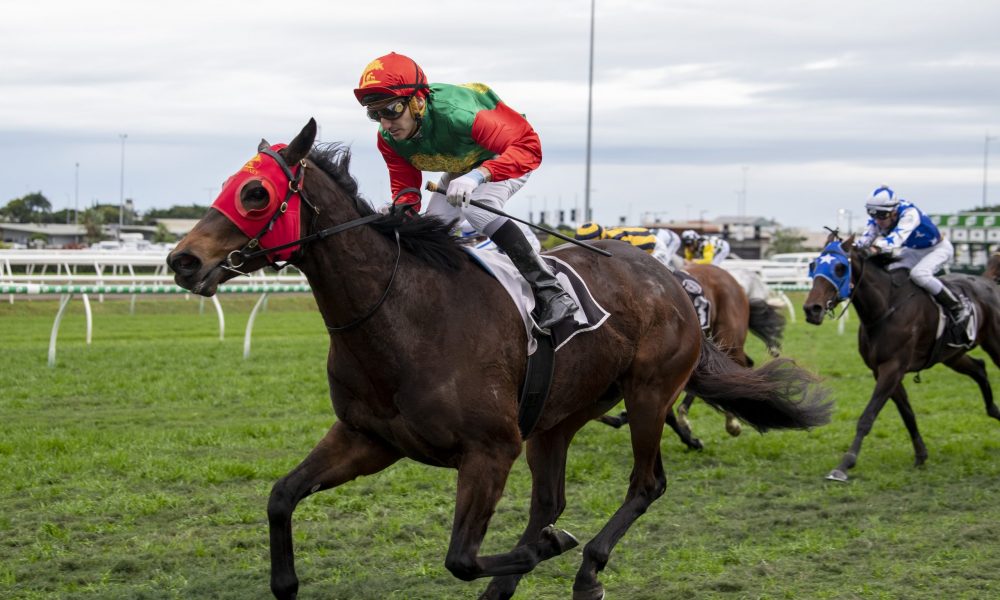 You put the best to the best and then you hope for the best.

It’s probably the oldest adage in breeding. But what if those two words come into it – “in-breeding”?

Zayydani, a half-sister to dual Group 1 winner Grunt, gave plenty of proof of the axiom’s worth in taking Saturday’s Listed Golden Crown at Eagle Farm, storming home at the end of the 2130-metre test to claim still more black type for her family with an imperious two-and-three-quarter-length win.

The four-year-old homebred from Brent and Cherry Taylor’s Trelawney Stud, who was a creditable fourth in Russian Camelot’s memorable South Australian Derby last year, took her record to four wins from 13 starts, gave brothers Ben and JD Hayes their first stakes win of their training partnership, and hinted at big things to come in the spring.

But there was something of a leap of faith in her making, or rather the Taylors’ backing their renowned judgment.

Zayydani is the latest stakes-winner by the mighty Cox Plate hero Savabeel, son of Zabeel, who’s about to win his seventh straight New Zealand general sires premiership just as comfortably as his daughter won on Saturday.

Having the same stallion in a rather close 2×3 cross could scare many a breeder off. But not the Taylors.

Others might go into exhaustive data research to see if the cross might work or be doomed to failure. But not the Taylors.

Brent says when predicting whether such a venture might result in some failed in-breeding, or in a canny piece of its barely distinguishable (apart from the wins) cousin – line-breeding – the eye reveals more than the statistics.

“I think the style and type of the individual is really important when it comes to that pedigree cross and close-up mating,” he tells It’s In The Blood.

“If they were similar in type, it’s something I probably wouldn’t do. But because they’re diverse individuals on style and type physically, the mating was an opportunity worth pursuing.”

Taylor had done plenty of hands-on “research” to tell him the mating was sound. His experience working at Cambridge Stud had given him an intimate knowledge of Zabeel and his offspring. And he knew Ruqqaya better than anyone, having bred her from Sayyida.

“I knew Zabeel particularly well, and I’ve bred a lot to him,” he says. “And I knew the female family very well, and thought the style and type that Ruqqaya was, it wasn’t going to be a disadvantage to go to Savabeel,” says Taylor, who has repeated the dose with a yearling filly who’s about to go to the breaker’s.

Taylor feels, fortunately for Zayydani, that Savabeel is not your usual-looking son of his great sire. Rather, he feels he inherited more genes, and more muscle, from Success Express, who stood two seasons in New Zealand, was the sire of Savabeel’s dual Group 1-winning dam Savannah Success, and was mentioned in these parts last week as the father of Golden Slipper winner Polar Success.

By contrast, Ruqqaya, Taylor says, inherited some fine lines from her dad, the outstanding broodmare sire Van Nistelrooy, another US-bred who shuttled between Kentucky and Trelawney for four seasons up to 2007.

“Savabeel is not your typical Sir Tristram-Zabeel type,” Taylor says. “He’s got a lot of Success Express in him.

“Zabeel was probably more classical in his style, by the length of the barrel; more English. Savabeel’s more muscular, and he’s got better quarters than Zabeel did himself.

“And Ruqqaya is more like an American type of mare,” he says, pointing to Van Nistelrooy’s North American parents Storm Cat and Hallory (Halo).

“She’s quite typical of Van Nistelrooy – not so long in the back, good quarters, a fairly leggy, quality style of mare.

“She was pretty lightly framed, but in the end we bred a filly that I was expecting to see on style and type, a staying type of mare, which was cool. That’s what I was after.”

Zayydani appears well on her way to continuing a rich, if sparsely populated, train of success for the Taylors stemming from the mare who was essentially their own taproot figure, Sayyida.

As they positioned themselves towards their eventual takeover of the century-old Trelawney in 2010, the couple went hard to buy the Cambridge-bred daughter of Eastern Princess (Pompeii Court) as a yearling for NZ$160,000 at Karaka in 2002. Her younger full brother Amen would win five races in Sydney, and Sayyida was more than handy herself.

“It was a lot of money for Cherry and I at that time,” Taylor says. “Sayyida was one of our first mares in our development of Trelawney, as we looked to buy quality fillies at the sales and try to develop them from racing to breeding stock. And it turned out she had enormous ability.”

Sayyida won two of her first five races for trainer Roger James, but then disaster struck. She fractured a cannon bone, and wrecked a fetlock. Her racing days were over and, in the hands of many others, her days themselves would have been numbered. But again, not the Taylors, who once more backed their judgment.

“We decided to save her,” Taylor says. “She needed two operations to be plated and pinned, and it was quite a recovery. But she’d shown such ability that we wanted to make sure we had the opportunity to breed from her. She had a great mix of speed, stamina and determination, and we felt she was a wonderful opportunity to breed some quality horses.”

He didn’t think it would go this well.

First out, from her mating with Van Nistelrooy, was Ruqqaya, who won two of 18 racing for the Taylors. Three years later, after a cover from Thorn Park, Sayyida hit the highs with Ocean Park, who won five Group 1s, four of them in a row, capped off by his 2012 Cox Plate triumph. The now 12-year-old has, of course, gone on to be a most exciting sire himself, with progeny including triple Group 1-winner Kolding, and Tofane, the mare who also won a third Group 1 in the race before Zayydani’s last Saturday, the Tattersall’s Tiara.

Some ill fortune restricted Sayyida to just five named foals. She was retired from breeding in 2014, and the now 20-year-old remains a popular presence at Trelawney.

Meanwhile, Ruqqaya has made a good fist so far of emulating her dam in the breeding barn. Her first foal was King’s Man (Iffraaj), a five-time winner in Hong Kong. Second was Addison (Jimmy Choux), a stakes-placed Caulfield winner. Her third was Grunt, the son of O’Reilly who took a Flemington Group 1 mile double in 2018 in the Australian Guineas and Makybe Diva Stakes. Next came Zayydani.

“Sayyida handed down to her offspring tenacity, speed, and just sheer determination,” Taylor says. “There’s not a lot of foals from her, in fact there’s not a lot of numbers in this family, but generally they’re high quality and high class types.

“To be honest, we didn’t think we’d get to where we are today in breeding some outstanding progeny from Sayyida and her daughters.

“But long may it continue.”