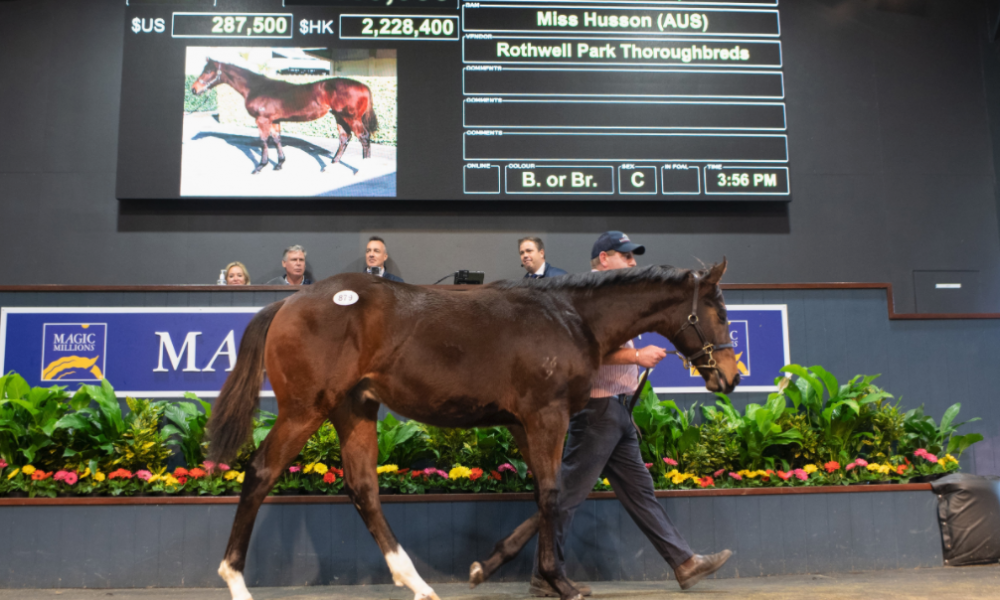 Segenhoe’s O’Brien goes to $410,000 for mature foal on day one of Magic Millions Weanling Sale

Peter O’Brien, with the backing of Segenhoe Stud owner Kevin Maloney, put his stamp on day one of the Magic Millions National Weanling Sale with the purchase of a $410,000 Zoustar (Northern Meteor) colt as buyers zeroed in on foals deemed to be of the highest quality.

The session-topping son of Zoustar was one of 11 weanlings to make $100,000 or more at the Gold Coast yesterday in a shortened session which started in subdued fashion before some banner colts and well-bred fillies took centre stage to help improve the figures and, more importantly, push the clearance rate to an acceptable 71 per cent.

Segenhoe Stud Australia principal Kevin Maloney gave general manager Peter O’Brien the go-ahead to back his conviction that the top-priced colt could develop into a big money spinner early next year.

“I saw him at Rothwell about two months ago and I loved him then and he’s just improved from then on,” O’Brien said from the Gold Coast yesterday.

“We had a meeting about him this morning and, speaking to Kevin Maloney, I said, ‘he’s the one for me at the sale’.

“He obviously cost a little bit more (than I expected) because I thought he’d be $350,000-ish but you’ve got to buy the one you want.

“He’s a beautiful horse by a stallion we love and we’ll bring him back here next year and hopefully double (our money).”

Pinhooking is a speculator’s market at the best of times – let alone during a pandemic that has caused economic chaos around the world – but O’Brien had confidence in the colt and past sale ring glory to justify the optimism.

“We have had a lot of luck buying weanlings and pinhooking them,” he said.

“He comes from a great farm. Scotty (Irwin) does a great job and we’re delighted to get him back to the farm.

“He’s all there now – he’s a very mature horse, very correct and I’ve just got to try and make sure nothing goes wrong.”

One of nine weanlings sold by day one’s leading vendor Rothwell Park, the Lot 879-catalogued Zoustar colt is the second foal out of the stakes-placed Miss Husson (Husson) who was bought by Yulong for $360,000 during the broodmare sale earlier this week.

“He is so fluent with his movement, as was the mare we presented a couple of days before. Those genetics come through. It was a lovely package, with the Zoustar influence in there and it has paid dividends,” Rothwell Park principal Scott Irwin said.

“He was very, very busy and he never put a foot wrong. Considering we got up here on the 10th and he’s been here 19 days and hasn’t had the chance to go out and express himself in the yard, he’s done a great job.

“The whole draft has handled it well and it’s a credit to my staff the way the horses have been educated, it really is.”

Earlier in the session, the familiarity with a family nurtured by Makybe Stud’s Tony Santic for more than a decade convinced Lime Country Thoroughbreds to launch a considered plan to dig deep for a well-credentialled Written Tycoon (Iglesia) filly.

Lime Country’s Greg Griffin, who outlaid $230,000 for the Aquis Farm-consigned Written Tycoon filly on the advice of agent James Bester, hopes to bring the filly who features Starspangledbanner (Choisir) in her pedigree, back to the Magic Millions sale in January.

“We know the filly well through the Makybe guys and selling for them before,” Griffin said.

“We thought we would take a bit of a different tack and in that if we were going to spend some decent money, we would try on a filly as it gives us another option and hopefully we stay away from the big colt wars.”

The filly, who was catalogued as Lot 868, is the first foal out of the three-time winner Matildare (Rothesay), who in turn is a half-sister to the stakes-placed Gold Anthem (Made Of Gold), the dam of the Group 1-winning, Rosemont Stud-based, sire Starspangledbanner.

“She has a pedigree with genuine upside and we’ll look to bring her back, all going well, but if not if there is some hiccup we have a back-up plan,” Griffin said.

“She has a little bit more scope than many of her family that we’ve had. We bid on the mare last year in June and got beaten, so it was nice to get the filly.”

Aquis Farm sold eight weanlings yesterday at an average of $65,250 and chief executive Tony “Tubba” Williams was pleased with the way the draft was received, particularly with the Written Tycoon filly and a Spieth (Thorn Park) colt who was bought for $50,000 by Simple Bloodstock Services’ Merrick Staunton for New Zealand’s Hallmark Stud.

“I don’t mind saying, we were all very pessimistic coming into the sales – none of us were expecting the sales to be as good as they have been,” said Williams, who returned to Australia late last year after a three-year stint running UK auction house Goffs.

“We’re really lucky in Australasia to have a lot of international money in the market, whether that be Coolmore spending $10 million on mares in the past couple of days or Yulong spending a lot of money on mares, those two groups are extremely strong in the market.

“The high-end horses are now seemingly making more money. There’s a lot of people on those high-end horses, but there’s also perfectly nice horses in the middle market that can be overlooked.

“But across the board, for Magic Millions to achieve the results that they have over the past four days, it’s testament to the resilience of the thoroughbred breeding industry. I hope it will hold up going forward in 2021. Time will tell but the reality is I think everyone would be extremely pleased with how the market has been.”

Meanwhile, Victorian agent Suman Hedge was able to land a Lonhro (Octagonal) colt for $150,000 early in the day for the Grant Bloodstock partnership.

Bidding strategically on the phone via Barry Bowditch while watching on from the back parade ring at the sales complex, Hedge and Silverdale Farm general manager Rob Petith landed the Sledmere-consigned colt.

“We try to mix it up a little bit, so it’s not so obvious. Sometimes we do that, but I’m not sure if it makes any difference and it makes us feel better,” Hedge said.

The colt is the fifth foal out of La Parisienne (Commands), a placed half-sister to Rothesay (Fastnet Rock) and fellow stakes winner Sensei (Dream Ahead). He was catalogued as Lot 841.

Hedge will keep an open mind about which sale to place the colt in next year.

“At the end of the day he was just a really high-quality colt and he was a pea-in-a-pod to Lonhro – he was almost his copy,” he said.

“He had a lot of quality and most of them are controlled by Darley, so there’s not that many of them in the market. He’ll be a lovely sales horse as he’s got a masculine head on him with a good skin and he’ll appeal to many people.”

Sledmere also sold a colt by first season Yarraman Park Stud sire Hellbent (I Am Invincible) out of Queen Of Kandy (Magic Albert) for $160,000 to Scott Darby’s D R Pinhook, the prominent syndicator’s new venture which was launched at the recent Inglis Australian Weanling Sale.

Thirst for quality on day one

After a tentative first hour of selling, where buyers and vendors were treading warily given the economic outlook heading into next year’s yearling sales, the market picked up and the clearance rate (71 per cent) continued to improve.

Magic Millions managing director Barry Bowditch reiterated other industry stakeholders who suggested the top-end of the market was vibrant.

“There is plenty of money around and I think looking at the results today there is an insatiable thirst for quality,” Bowditch said.

With that in mind, Bowditch expects a full day’s selling today to be brisk.

He said: “I think vendors will come back (today) with a realistic frame of mind and I think it is a market that there will be plenty of opportunities to be had for the guys that are either here or looking for information on these horses to play, because there are plenty of nice horses.”

Magic Millions’ bloodstock staff managed to get some passed in lots sold after the short selling session and Bowditch predicts the clearance rate to continue to improve over the next 24 hours.

“I think the depth of the sale is really good, the feedback we have had on the catalogue has been really positive,” Bowditch said.

“I am also thrilled that Scott and Rothwell have seen some good results today. They have been a big supporter of this sale for forever and a day.

“They have stuck solid again this year and I was thrilled they got some good results today including the top price.”