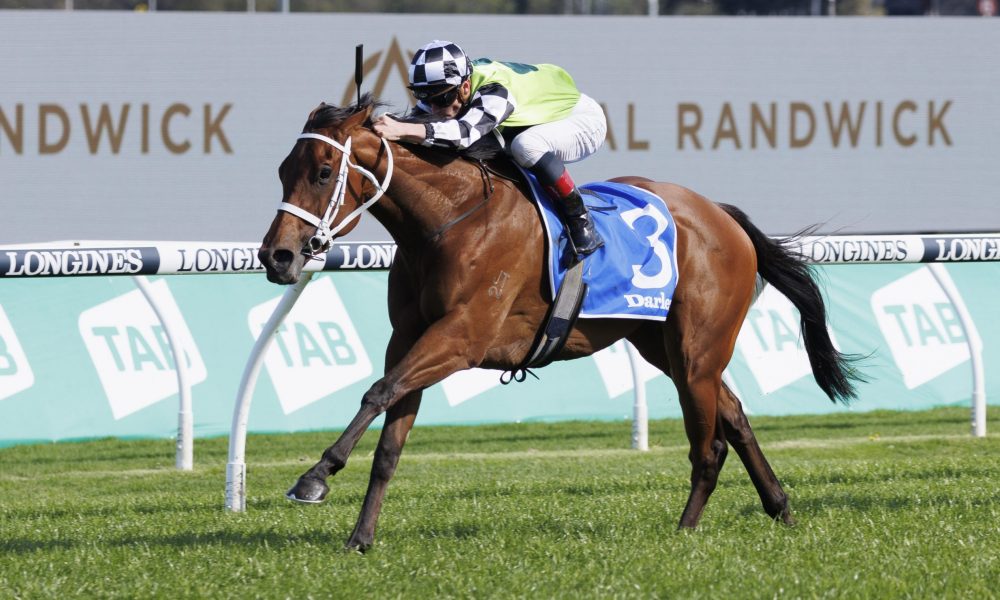 Zoustar (Northern Meteor) yesterday continued the momentum of a remarkable few weeks for the stallion, capping a defining day by securing a clean sweep of the Princess Series and an impressive winner of the Gimcrack Stakes (Gr 3, 1000m), as two-year-old racing this season began in earnest with a pair of emphatic performances at Randwick.

The Group 1 crown, a fifth individual elite-level winner for Zoustar, went to Zougotcha (3 f Zoustar – Fast Talker by Fastnet Rock), who again proved imperious in winning the Flight Stakes (Gr 1, 1600m) at Randwick yesterday, anointing herself as queen of the Darley-sponsored series for three-year-old fillies in winning three of the four races, adding to earlier victories in the Tea Rose Stakes (Gr 2, 1400m) and Silver Shadow Stakes (Gr 2, 1200m).

The second leg, the Furious Stakes (Gr 2, 1200m), went to another daughter of Zoustar in North Star Lass, who finished third in yesterday’s Flight Stakes, as Zoustar became just the third stallion since 1993 to sire the winners of all four feature races.

And then there’s Zoustar’s latest two-year-old crop. The first conceived off a fee of $154,000 (inc GST), a figure raised from $60,500 (inc GST) for his current three-year-olds, it made the most emphatic statement in Randwick’s juvenile curtain raiser courtesy of Platinum Jubilee (2 f Zoustar – Miss Debutante by Fastnet Rock), who announced her credentials as an heir to further elite success with an astonishing come-from-behind victory in the Gimcrack.

This, a week after the stallion secured a first-crop Group 1 winner in the northern hemisphere when Lezoo won the Cheveley Park Stakes (Gr 1, 7f) at Newmarket.

Zoustar finished eighth on the general sires table last campaign, his highest earner claiming a little over $500,000, but Zougotcha has already surpassed that figure within the first two months of the new season, taking her earnings to beyond $700,000 with her three valuable victories since August 1.

Her prize-money haul, aided by that of three other individual stakes winners this season, sees Zoustar take an early lead in the general sires’ championship over previous champions I Am Invincible (Invincible Spirit), Written Tycoon (Iglesia) and Snitzel (Redoute’s Choice).

“It’s his first book of mares off the back of [Group 1 winner] Sunlight and at a slightly higher fee.

“We’re excited by what they’re doing and to see the two-year-old filly do what she did today, it’s exciting for us and the stallion.

“For him to get the Group 1-winning filly up there in the Cheveley Park Stakes, that was a huge result for us down here and one that we’ve dared to dream of.

“But for him to actually achieve it, it’s probably even more mind-boggling than what he’s achieved here today. It’s so hard to do.”

Zougotcha, who was sent off the $4.20 second favourite, made good use of barrier two in settling behind the early pace set by the Gai Waterhouse and Adrian Bott-trained North Star Lass.

With Champagne Stakes (Gr 1, 1600m) winner and last-start Golden Rose (Gr 1, 1400m) sixth She’s Extreme (Extreme Choice) on Zougotcha’s outside, James McDonald took the inside route on the filly in the straight, coming upsides North Star Lass to prove too strong in the closing stages.

Zougotcha was vying for favouritism with Godolphin’s In Secret (I Am Invincible) for the Thousand Guineas (Gr 1, 1600m) on October 12, but Waller said the filly would likely head for a spell, leaving In Secret as the $5 favourite with yesterday’s Edward Manifold Stakes (Gr 2, 1600m) winner She’s Licketysplit (Turn Me Loose) for the Group 1 Classic.

“I would say that will be her last run of the spring,” Waller said. “We had a pretty short run up from the winter in Queensland so we don’t need to find out where the end is. We will give her a bit of a break and look forward to the autumn.”

“I was a bit disappointed,” he said. “Six-hundred metres out I was never really in the race. Never travelled as well as she has in the past. I was out on my feet at the 150-metre mark. Whether it was the seven-day back-up [I don’t know].”

Zougotcha, a $500,000 buy for Waller and agent Guy Mulcaster from the Widden Stud draft at the Inglis Easter sale, is the fifth foal out of Fastnet Rock (Danehill) mare Fast Talker and a sister to Listed winner Persuader and half-sister to the stakes-winning The Actuary (Sebring).

The resumption of two-year-old racing brings with it an air of anticipation and excitement, none more so than for Hall of Fame trainer Gai Waterhouse, but in winning yesterday’s Gimcrack Stakes with Platinum Jubilee she filled a rare vacancy in her trophy cabinet, and did so in style as Waterhouse and her training partner Adrian Bott saddled the quinella in the valuable contest.

Drawn in barrier eight, Platinum Jubilee settled near last under Regan Bayliss in the capacity 14-runner field and spotted the tearaway leaders up to ten lengths away at the top of the straight, but the filly weaved through her seemingly static rivals to burst to the front inside the final 50 metres.

The winning margin was just more than a length at the line, but far superior a few strides after, the filly defeating her Newgate Farm and China Horse Club-owned stablemate Perfect Proposal (Russian Revolution), with a length further back to Divine Glory (Hellbent), the first of a trio of Peter and Paul Snowden-trained runners who finished from third to fifth.

Platinum Jubilee, sent off a $10 chance in yesterday’s race, led from start to finish in winning her heat to post the fastest time at the official two-year-old trials at Randwick on September 19, but showed versatility and an abundance of talent to score on her race debut. However, the winning time of 1:00.22 for the 1000 metres on the Heavy 8 track was the slowest recorded in more than 30 years.

“It’s fantastic to be able to do that with Gai,” said Bott. “We brought a lovely group of fillies here today, we’ve got some fantastic owners behind us and supporters going to the sales.

“We bought some well-bred fillies that we thought would be nice, precocious types and they’ve been able to land it first-up. It’s an exciting time.

“She was coming late and I thought she was going on nicely to fill the placings but she was very strong late.

“They all did very well, I just thought she might have been the one that would have handled the conditions the most, the heavy track with her breeding, so maybe that was the difference.”

Platinum Jubilee became the 33rd individual stakes winner for Zoustar, who this year stands for a career-high fee of $198,000 (inc GST).

Bred by Go Bloodstock, who have remained in the ownership, she is out of the Listed-winning Fastnet Rock (Danehill) mare Miss Debutante, whose first foal is last season’s two-time juvenile Group 3 winner and recent Scarbrough Stakes (Gr 3, 1200m) winner Queen Of The Ball (I Am Invincible).

Miss Debutante has a yearling filly by Written Tycoon (Iglesia) and is due to foal to Flying Artie (Artie Schiller).

Both Platinum Jubilee and Flight Stakes winner Zougotcha are out of Fastnet Rock mares, the cross responsible for three individual stakes winners in total.