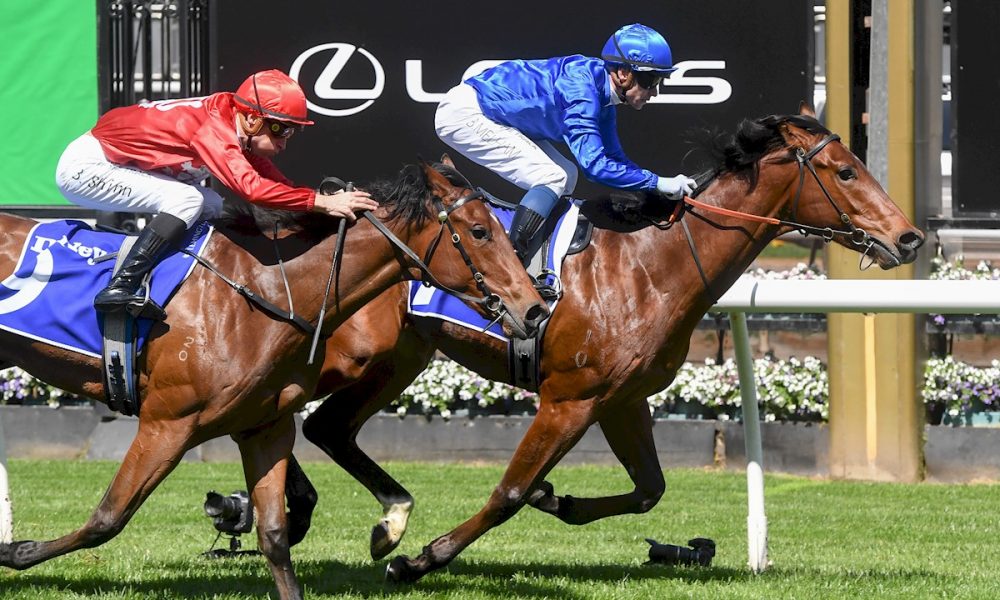 Godolphin got their two-year-old season underway with a win in yesterday’s Maribyrnong Trial Stakes (Listed, 1000m), with the move to place Zulfiqar (Exceed And Excel) at Flemington paying dividends for James Cummings’ team.

The colt was scratched from the Breeders’ Plate (Gr 3, 1000m) in Sydney and redirected to the Good 4 surface in Melbourne, where he found the rail and held his position to the winning post, despite the close attentions of the Rosemont Stud-owned filly Aditi (Exceed And Excel), who missed out by a neck.

Charm Stone (I Am Invincible), the $2.60 favourite, finished a length and a half from the winner in third.

Arriving off the back of a trial at Randwick on September 19, Zulfiqar showed a professionalism under Ben Melham to lay down an early marker in the two-year-old ranks.

“He’s mature and he’s bigger than most of his colleagues back in the barns,” Cummings said.

“But he’s got a bit of speed about him, and Ben Melham was able to use that. He used his pace out of the gates and got him into stride using that inside running rail. That’s so advantageous to a young horse.

“It’s a great credit to all my staff at Crown Lodge who have just nursed this horse along, brought him in prep by prep and had him ready to go even for the Breeders’ Plate.

“But I just did not want to run the horse on a rain-affected track and there was Flemington with Liam O’Keefe having this track perfectly laying in wait for us.”

Zulfiqar derives from one of the most potent families in the Stud Book. His winning dam Sayf Shamal (Elusive Quality) is a half-sister to Essauoira (Exceed And Excel), the dam of Group 1 winners Alizee (Sepoy) and Astern (Medaglia D’Oro) as well as high-class two-year-old-turned-sire Tassort (Brazen Beau).

The race also featured early drama for Godolphin when Pantelone (Street Boss) was withdrawn after he could not be saddled.

“The first needle wasn’t working well, so another needle had to go in on the other side of his neck.

“They’ve got to do what they’ve got to, but if the two-year-olds don’t cop it sweet and they’re not in the right headspace it’s just going to be disappointing and dangerous for everyone, so we pulled him out.

“He’ll go back to the trials and fight another day because he’s not a bad little horse.”