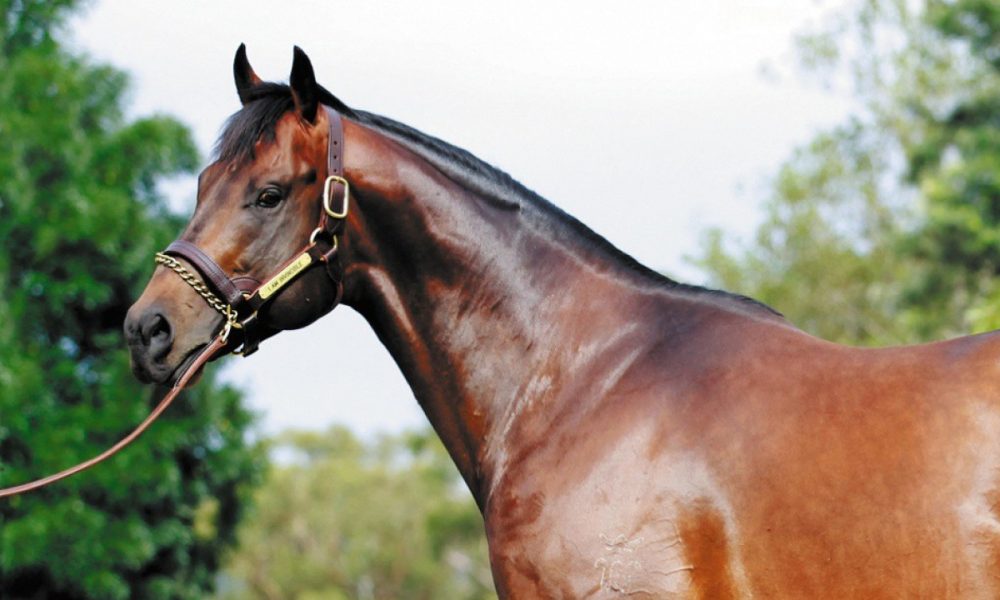 Flying Artie – Rockin’ Artie (2 g ex Rock Beauty by Stratum) won the QTIS 2YO Maiden Plate (1200m) at the Gold Coast on Saturday at his second start to become the third first crop winner for Newgate Farm’s young stallion Flying Artie (Artie Schiller). The Scott Morrisey-trained juvenile won the $21,000 race by two and a quarter lengths over Watachoice (Choisir). Spill The Diamonds (Spill The Beans), a stablemate of the winner, was another length away in third. Bred by Senga Bissett and sold by Ashleigh Thoroughbreds, Rockin’ Artie was a $110,000 purchase by John Morrisey from this year’s Magic Millions Gold Coast Yearling Sale. Flying Artie, who stands for a fee of $16,500 (inc GST) this year, is also the sire of winners Princess Bojack and Harlem Groove, as well as the stakes-placed The Art Of Flying.

Vadamos – Catena Zapata (2 c ex Pretty Priceless by Pearl Of Love) provided Vadamos (Mosun) with his 14th individual winner when landing a conditions contest over one mile on Dundalk’s all-weather track on Wednesday evening. The Henry De Bromhead-trained colt narrowly saw off  Dha Leath (Mehmas) by a neck, with the Joseph O’Brien-trained Irwin (Australia) a further half-length behind in third. Catena Zapata was making his second start after finishing seventh on debut at Dundalk. Vadamos, who stood at Rich Hill Stud for a service fee of NZ$15,000 (plus GST) in 2020, has had 52 runners to date, with the Group 3-placed Spycatcher the pick of his first crop. Vadamos will stand at Tally Ho Stud in Ireland for €5,000 (approx. AUD$8,030) in 2021.

Frankel – Frankel (Galileo) has a new star in Japan – and a 12th top-flight winner of his stallion career – after Grenadier Guards (2 c ex Wavell Avenue by Harlington) landed Sunday’s Asahi Hai Futurity Stakes (Gr 1, 1600m) at Hanshin in a track-record time. Trained by Mitsumasa Nakauchida, the juvenile notched his second win in four starts as he defeated Stella Veloce (Bago) by three-quarters of a length, with favourite Red Belle Aube (Deep Impact) another length and a half behind in third. Although Grenadier Guards is Japanese-bred by Northern Racing, he epitomises the country’s cosmopolitan approach to bloodstock. He is the first foal of Canadian-bred Wavell Avenue, whose sire Harlington (Unbridled) is not a household name but is out of the brilliant Serena’s Song (Rahy). Wavell Avenue won the 2015 Breeders’ Cup Filly & Mare Sprint (Gr 1, 7f) and narrowly failed to retain the title the following year. Exported to Japan, she has subsequently produced a yearling filly by the late Deep Impact (Sunday Silence) and a filly foal by Lord Kanaloa (King Kamehameha). Frankel will stand at Juddmonte’s Banstead Manor in Newmarket for a fee of £175,000 (approx. AUD$310,350) in 2021.

Pomodoro –  Despite being sent off a 66-1 shot Russian Rock (3 c ex Elisium by Proclamation) finished fastest of all to run down Linebacker (Captain of All) and provide a huge upset in a thrilling edition of Saturday’s Cape Guineas (Gr 1, 1600m) at Kenilworth, earning Pomodoro (Jet Master) his second elite-level success. The Dean Kannemeyer-trained Russian Rock’s only win in his previous four starts came on debut at Durbanville, but he looked every bit a top-class colt when powering home under Grant Behr to defeat Linebacker by a neck, with Rascallion (Vercingetorix) a further one and a quarter lengths back in third. Favourite Malmoos (Captain Al) could only finish ninth. Pomodoro only has six stakes winners to his name and two of them have won at the top-level, with Pomodoro also the sire of dual Grade 1-winner Return Flight. Pomodoro stood for R10,000 (approx. AUD$900) at Klawervlei Stud in 2020.

Dynasty –  Nexus (5 h ex Mystery Dame by Jet Master) brought up Dynasty’s (Fort Wood) 74th individual stakes winner with victory in the Peninsula Handicap (Gr 2, 1800m) at Kenilworth on Saturday. Trained by Justin Snaith and ridden by Piere Strydom, Nexus defeated Super Silvano (Bold Silvano) by half a length, with Love Happens (Silvano) a further neck behind in third. Nexus is the third foal out of Mystery Dame (Jet Master) and is a brother to Group 1 winner Lady In Black. Dynasty died last year aged 19 after illness following an operation for colic. He stood at Ridgemont Highlands in South Africa.

I Am Invincible (pictured above) – I Am Invincible (Invincible Spirit) brought up his 60th individual stakes winner on Wednesday when She’s All Class (2 f ex Shirra Nui by Viscount) took out the Magic Millions Wyong 2YO Classic (RL, 1100m) yesterday. Yarraman Park’s I Am Invincible stood for $209,000 (inc GST) in 2020.

Rocker – Soxagon (5 g ex Strike On Goal by Van Nistelrooy) swept round the outside to land the Lough Neagh Stakes (Listed, 1350m) at Doomben on Saturday, earning Rocker (Fastnet Rock) his first stakes winner. The Mark Currie-trained five-year-old powered home strongly under a perfectly-timed Glen Boss ride to defeat Emerald Kingdom (Bryannbo’s Gift) by a head. The Tony Gollan-trained $4 favourite Outback Barbie (Spirit Of Boom) finished one and a half lengths off the winner in third. Soxagon is the final foal out of Strike On Goal (Van Nistelrooy), who has produced winners from all three of her foals to race. Rocker, a five-time winner during his race career, has produced seven winners from 14 foals to grace the racetrack. Rocker stood his last season in 2015.

Sea The Stars – Alpen Rose (3 f ex Valais Girl by Holy Roman Emperor) maintained her unbeaten start to life in France with a narrow victory over Quiet Times (Reliable Man) in the Prix Miss Satamixa (Listed, 1500m) on Deauville’s all-weather circuit on Saturday, earning Sea The Stars (Cape Cross) his 73rd individual stakes winner. Godolphin’s Alpen Rose was trained in Britain by Charlie Appleby before moving to Henri-Alex Pantall’s yard, where he won on debut at Pau last month. Ridden by Mickael Barzalona, the three-year-old filly made it two-from-two since switching stables when seeing off Quiet Times by a nose, with Animal Fever (Animal Kingdom) a short-head behind in third. Sea The Stars will stand at Gilltown Stud for a fee of €150,000 (approx. AUD$241,100) in 2021.

Union Rags – Bob Baffert continued his domination of Los Alamitos Futurity Stakes (Gr 2, 9f) when Spielberg (2 c ex Miss Squeal by Smart Strike) provided the Hall Of Fame trainer with his seventh successive victory in the race and in the process became the 16th individual stakes winner for his sire Union Rags (Dixie Union). In an epic battle befitting of his name, Spielberg needed every yard of Saturday’s race to defeat The Great One (Nyquist) by a nose and post his second win in six starts. Petruchio (Into Mischief) was three and a half lengths behind the US$1 million purchase in third. Spielberg is the first stakes winner of the winning mare Miss Squeal (Smart Strike) whose other foal to race is three-time winner Higher Road (Quality Road ). The dam also has a yearling filly by Honor Code (A. P. Indy) and a Bernardini (A. P. Indy) weanling filly. Belmont Stakes (Gr 1, 12f) winner Union Rags will stand at Lane’s End Farm in Kentucky for a fee of US$30,000 (approx. AUD$39,345) in 2021.