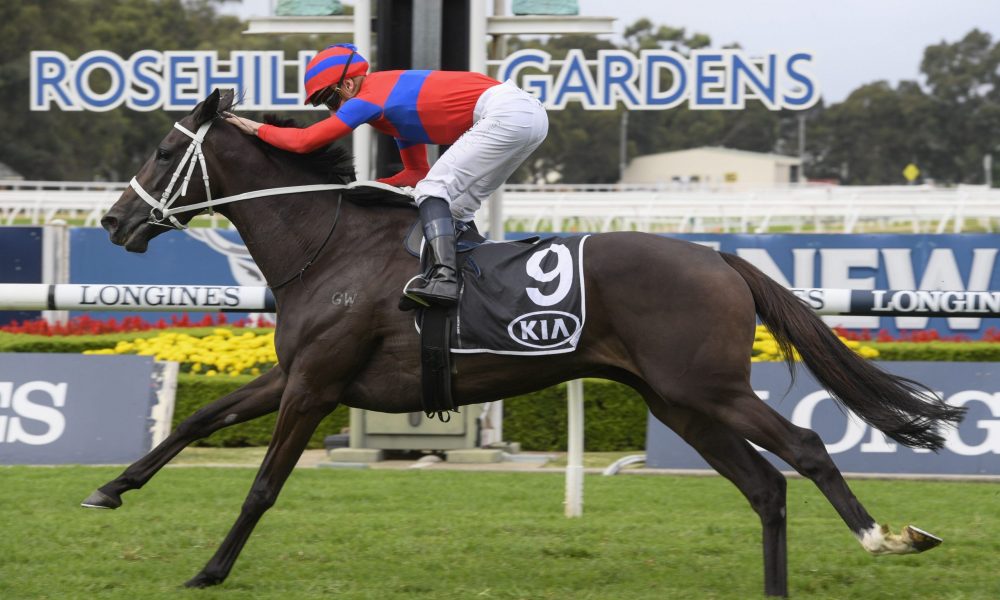 Ridden patiently by James McDonald, the 2019 ATC Australian Oaks (Gr 1, 2400m) winner settled well back in seventh place and was looking to be facing a difficult task after the leaders covered the first 1200 metres in a pedestrian 1:18.59 (13.09 200m rate), even allowing for the Soft 7 track.

But that situation changed suddenly shortly afterwards, when Brenton Avdulla aboard the Kris Lees-trained import Danceteria (Redoute’s Choice), could not tolerate the tempo any longer and took his mount from last in the nine-runner field to be in front approaching the 1000 metres.

It turned the race into a true test and Verry Elleegant relished the task.

McDonald asked her to improve upon reaching the 600 metres, the mare then easily taking the lead at the 200 metres before racing away to score effortlessly by four and a quarter lengths, her third and most impressive Group 1 victory to date.

With her stamina and racing manners coming to the fore as a four-year-old, Verry Elleegant now looms as a strong Caulfield Cup (Gr 1, 2400m) and Melbourne Cup (Gr 1, 3200m) contender in the spring.

Especially significant is Verry Elleegant’s vastly improved racing manners that have seen her transformed from being sometimes wayward and ungainly to just being downright hard to manage in a field; she now appears to travel comfortably and quite relaxed, so it seems.

James McDonald’s riding is clearly a factor while leading trainer Chris Waller has excelled after he has persevered with a number of gear changes, mainly focusing on the use of ear muffs and a nose roll over a long period before dispensing with them recently.

But while the tactics in the race, or lack thereof, favoured front-runners, the progressive Shout The Bar was quite impressive, nevertheless.

The lightly-raced Gai Waterhouse and Adrian Bott-trained filly, who was having only her fourth race start, was challenged on a number of occasions from the home bend but continued to fight gamely before holding out Probabeel (Savabeel) with the other star filly Funstar (Adelaide) fourth.

The runner-up Probabeel was certainly not disgraced under the circumstances where she clocked 34.28 (last 600m) and 22.49 (last 400m) in the sprint home.

However, there could be no complaints about the pace set in the Star Kingdom Stakes (Gr 3, 1200m) which saw the Anthony Cummings-trained sprinter Vegadaze (Lope de Vega) lead and lift gamely after some quick mid-race sections.

After going well at stakes grade on a number of occasions previously, it was Vegadaze’s first win at stakes level and it was a performance full of merit.

The four-year-old showed his customary pace and soon went to the front but he was then pressured by the favourite Villami (Foxwedge) before he dug deep under Tom Marquard’s riding to defeat Manicure (Exceed And Excel) by a short neck with Kementari (Lonhro) a close-up third.

Another Rosehill winner to go well on the watch was the Ciaron Maher and David Eustace-trained colt Holyfield (I Am Invincible), who stamped his potential with a strong effort in winning the Schweppervensence (registered as T L Bailleu Handicap) (Gr 3, 1400m).

After a smart beginning, Holyfield went to the front but was hotly challenged on a number of occasions. However, he still retained his rails position before driving through to take a clear break rounding the home turn.

Holyfield then lifted gamely under a typically persuasive Tom Marquard ride before safely holding out the Peter and Paul Snowden-trained colt Untamed (Pierro) by three-quarters of a length, scoring in a time of 1:26.68.

It was Holyfield’s third win in four starts and the colt’s first at stakes level but judging by Saturday’s effort it will be far from his last.