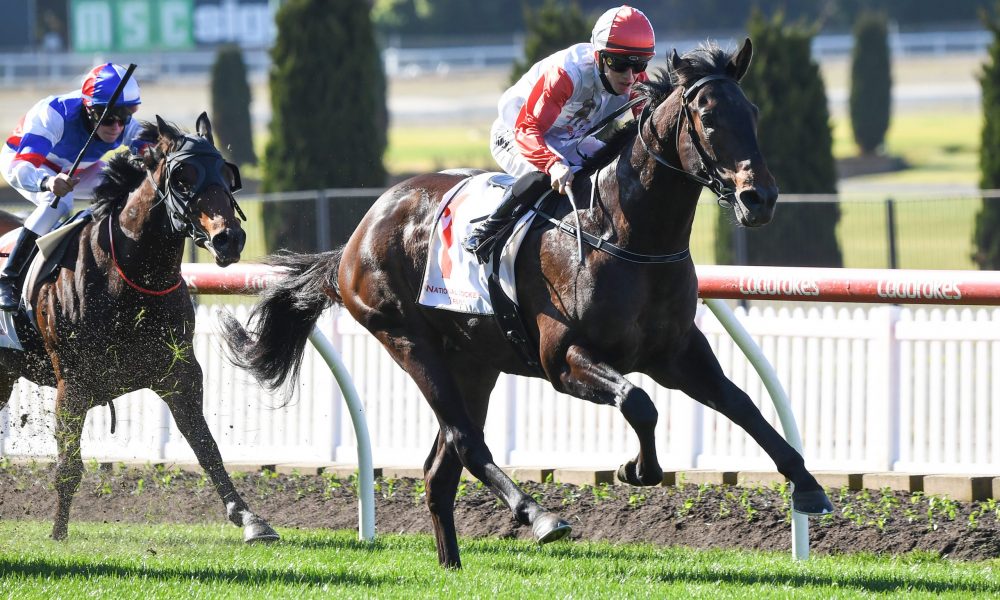 In the depths of winter at a nondescript meeting at The Valley two lightly raced horses made a big impression at the start of the new season, prompting connections to signal their intent on bigger races during the spring carnival.

Hard Landing (All Too Hard), the Maribyrnong Plate (Gr 3, 1000m) winner last November, was expected to be a major player in the big two-year-old races but the well-bred colt’s campaign was derailed after contracting an illness.

He returned from a long spell with a victory in the Jockey Celebration Day Handicap (1000m) and, two races later, the Jason Warren-trained Brooklyn Hustle (Starspangledbanner) caught the eye with a fast-finishing win in the Remembering Mark Goring and Adrian Ledger Handicap (1000m).

Brooklyn Hustle had not raced since last year’s Coolmore Stud Stakes (Gr 1, 1200m) at Flemington where she finished fifth, four and a quarter lengths behind Exceedance (Exceed And Excel).

Yesterday’s successful comeback of Hard Landing, who was bred by Neil Werrett and was sold for $280,000 at the 2019 Magic Millions Gold Coast Yearling Sale, gave co-trainer Ben Hayes the confidence to put the Mitchell McKenzie Stakes (Listed, 1200m) at Moonee Valley on August 22 on the colt’s agenda.

“He’s a lightly raced two-year-old because he got really sick after his last run,” Hayes said.

“He had to have a big dose of antibiotics and we really looked after him. But he’s come back fantastic, he’s matured into himself, grown up over the hind. It’s fantastic to see him win like that.

He looked like he handled The Valley pretty well today so (the McKenzie Stakes) will be his next progression.”

Hard Landing defeated Diesel ‘N’ Dust (Pride Of Dubai) ($4.80) by half a length with The Cruiser (Charge Forward) ($21) running on late to finish another half a length away in third.

“The horse relaxed really well and gave me a good kick on the turn,” Stockdale told Racing.com.

“He still has a little bit to learn, he’s still got improvement to come, and he was having a bit of a look going towards the post but he gave me the feel of a nice horse, that’s for sure.”

Jason Warren, the trainer of the Rosemont Stud-bred and owned Brooklyn Hustle, did not want to put the “cart before the horse” after yesterday’s victory and he was clearly relieved the four-year-old was able to justify his long-held high opinion of her.

“It’s just good to have to have that monkey off our back, really. She’s been carrying a few knockers, the filly, but she did such a tremendous job last prep,” Warren told Racing.com.

“She was hampered by issues even before she’d even had her first start, so to get her back here today in such good order, it’s a tribute to Rosemont Stud, Mark Young and my team back at home.

“We came here today off one soft jump out and we came here looking to use this run as a second trial going into better races. I’m pleased to see her resume like we knew she was capable of.”

Warren said Brooklyn Hustle, who had not won in five starts after her debut performance at Moonee Valley when beating Yes Yes Yes (Rubick), would have her next start in the next three or four weeks.

“We just wanted to get today out of the way and see how she pulls up. It’s just so pleasing for everyone involved,” he said.

“We’ve really had to be patient with her. For me, I took a bit of a bold step coming here off one soft jump out but I believe in the horse so much and she’s on her way up.

“We’ve got a couple of programmes mapped out for her but we’ll just let the dust settle and then lock in a race for her.”

Brooklyn Hustle, who was ridden by Dwayne Dunn, unleashed an eye-catching turn of foot to score by three and a half lengths over Propelle (Smart Missile). A Good Yarn (O’Lonhro) was a neck away back in third.

“It wasn’t working out that well for me in the early to mid-race stages but you can see the acceleration, that turn of foot, and that’s a great asset,” Dunn said.

“I think today’s event was more about getting her confidence back and getting her back as good as what she was.

“Hopefully she can go on to bigger and better things.”

There will be 13 lots by Hard Landing’s Vinery Stud-based sire All Too Hard (Casino Prince) and one lot by Rosemont Stud’s reverse shuttler Starspangledbanner (Choisir), the sire of Brooklyn Hustle, offered at the Magic Millions National Yearling Sale which starts tomorrow.