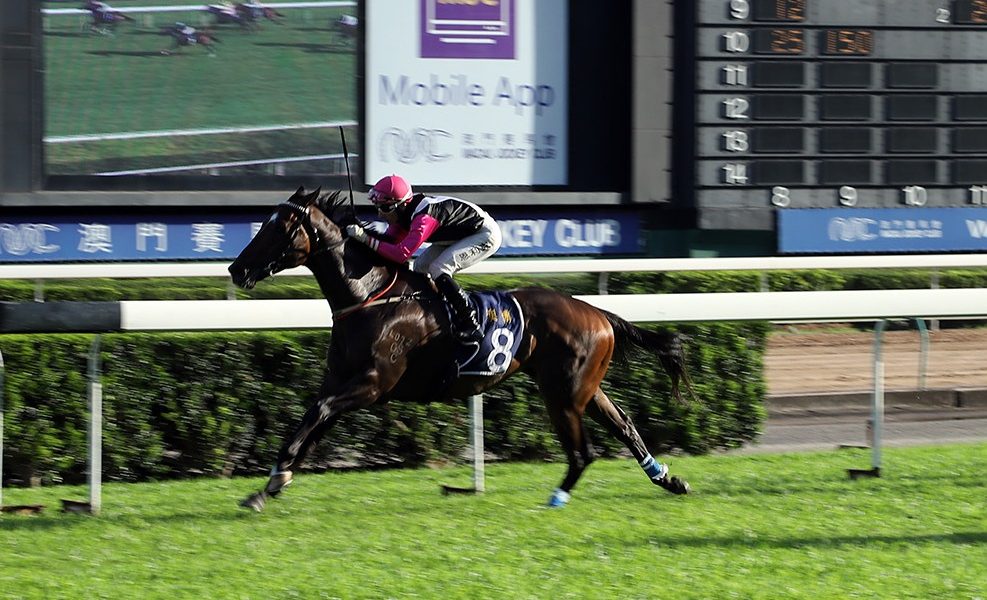 Geoff Allendorf has an anxious wait to see if his talented galloper Beauty Wink (Medaglia d’Oro) gains a berth in next month’s Macau Derby (Listed, 1800m) to be run on July 19, following his impressive win in Sunday’s Class 3 (1500m).

Fired out of the gates by Brazilian Fausto Henrique, Beauty Wink took command of the race from the outset and ran out an easy one and three quarter length winner over Fortune Generation (Pour Moi), with Autumn Cloud (New Approach) in third.

The win gave the good looking son of Medaglia d’Oro (El Prado) his third win from only six starts with one second placing and two luckless unplaced efforts.

Prior to the race, Allendorf was adamant that Beauty Wink was not fully wound up having only one run since January, but added that he thought he had done enough to take out Sunday’s race.

“It’s been a difficult time for him as he has had hoof issues and had to miss the Derby Trial and the Guineas but for the moment things are good with him.” Allendorf said.

“I’d be expecting a penalty of eight points and upwards for this win so that will bring him up on the borderline for a Derby run. I don’t really want to run him again before the Derby but I’ll just wait and see.”

Allendorf already has the ultra consistent Oneofthegreats in the Derby field following his game third in the Macau Guineas (Listed, 1500m), and with Beauty Wink he has a horse whose potential is still untapped.

Beauty Wink was originally earmarked for Hong Kong following two impressive barrier trial wins at Cranbourne but was found to be blind in the offside eye. Macau being one of the few jurisdictions in the world that allows one eyed horses to compete was then the logical choice for owners Kwok Siu Ming and David Price.

Allendorf knows what it takes to win a Derby having won the blue riband event with Lucky And Wealthy (Strada) under German rider Andy Helfenbein in 2013, and again with Turquoise Power (More Than Ready) with Joao Moreira in the saddle in 2016.

The win by Beauty Wink gave Allendorf a double for the afternoon having won the first of the day, the Class 5 & 6 (1500m) with bolter Luen On Prodigy (Husson) ridden by Stephane Ladjadj.

The most impressive winner on Sunday was no doubt the Patrick Lee-trained Crispy Biscuit (Written Tycoon) who overcame huge difficulties to win the Class 2 (1200m).

Ridden by Peter Ho, Crispy Biscuit was badly checked out of the gates and was a clear last on settling. In a typical Peter Ho ride, the talented hoop let the horse balance up and then began to work his way up to the tail of the field.

The gelding struck more trouble when he began to overace and got on the heels of a few stragglers at the eight hundred corner, before threading a path through the field. Once in the straight, the son of Written Tycoon (Iglesia) powered home over the top of his rivals to win by two lengths from the bolter Royal Good Friend (Golden Archer), with Destiny’s Choice (Sepoy) in third.

Crispy Biscuit has now won three races from only five starts in Macau and is no doubt destined for Class 1 given his brilliant display on Sunday.  Prior to being imported to Macau, the gelding raced in Queensland as Shaken Not Stirred and won two races at Ipswich over 1100 and 1200 metres when prepared by Matthew Park.

Lee later made it a double when his old timer Mission Gdragon (Jet Spur) took out the Class 3 & 4 (1200m) to also give Henrique a double for the afternoon.

Mission Gdragon, a rising eight-year-old has been a great money-spinner for owners Mr. and Mrs. Cheng Win Bor, having won nine races in the enclave and placed a further 21 times from his 75 starts, earning close to HK$3.2 million prize-money.

The son of Jet Spur (Flying Spur) was the very first winner from the original Online Magic Millions 2YO’s in Training Sales from 2014. The sale for the very first time was streamed live to the MJC Members Lounge and was the forerunner to the successful concept that can continues to produce a steady stream of winners in the enclave. Mission Gdragon has proved a real steal for his owners being only a AU$32,000 purchase, and judging by Sunday’s victory the old boy is not done with yet.

Golden Conqueror (Rothesay) made it seven wins from only eight runs when he again gave a dazzling display of speed to win Class 1 & 2 (1050m) on Friday night.

Ridden by regular jockey Roger Yu, Golden Conqueror flew the gates to cross from barrier 12 to lead easily and stretched his lead to a four lengths margin on straightening. Second place getter Loxwood (Pierro) momentarily looked as though he was going to make a race of it when he went out after the three year old son of Rothesay (Fastnet Rock), but like a good horse Golden Conqueror pulled out plenty to score untroubled. Oriental Profit (Mastercraftsman) ran on well from the back from third.

Golden Conqueror has proved a great buy for his connections the Golden Pistols Racing Syndicate having been purchased for only AU$55,000 at the 2018 Inglis Ready 2 Race Sale,  that was conducted at the Inglis Riverside Stables Complex at Warwick Farm.

As well as Golden Conqueror, Yu was successful on the very promising Akeli Sword (Dissident) for trainer Alan Tam in the Class 4 over (1050m).

Akeli Swords made it three wins from five starts all on the sand with an easy victory over Star Of Yiu Sun (Swiss Ace), with race favorite Diamond Moonlight (The Wow Signal) back in third.

Still So Cute (Thewayyouare) also from the Alan Tam yard gave Yu a treble on Friday night with an all the way win in the Class 3 (1510m), then the duo backed up again on Sunday with Die Casting Alloy (Dream Ahead) winning the Class 5 & 6 (1500m) to make it three for the weekend for Tam.