Almanzor on the board in style in Karaka Million 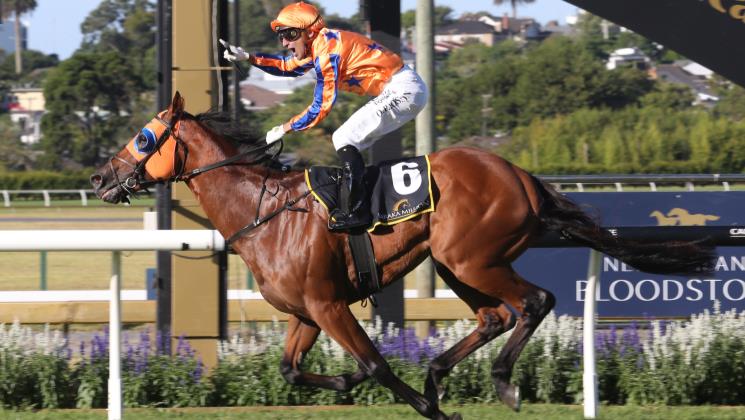 From the day it was first announced in 2018 that three-time Group 1 winner Almanzor (Wootton Bassett) would shuttle to Cambridge Stud the expectations have been high that he could prove a gamechanger for the New Zealand industry and could also be the stallion to usher in a new era of the historic farm after its sale from Sir Patrick Hogan to Brendan and Jo Lindsay.

The son of Wootton Bassett (Iffraaj) yesterday took an almighty leap towards cementing his place among the most sought after stallions in the region after Dynastic (2 c ex Meir by Volksraad) landed the Karaka Million 2YO (RL, 1200m) at Ellerslie and in doing so became not only Almanzor’s first southern hemisphere winner, but also his first global stakes winner.

It was also a day of history at Ellerslie as Dynastic became the sixth straight winner purchased by Te Akau’s David Ellis and trained by Jamie Richards, following up the victories of Melody Belle (Commands), Avantage (Fastnet Rock), Probabeel (Savabeel), Cool Aza Beel (Savabeel) and On The Bubbles (Brazen Beau).

While Ellis will be hoping to find their seventh winner at the delayed New Zealand Bloodstock Karaka Yearling Sale in March, it won’t be prepared by Richards, whose imminent departure for Hong Kong ensures that his streak will end at six. Still, with the unusual circumstance of no sale following the Karaka Million raceday this year, the Te Akau celebrations are sure to have continued well into the night.

Partnered deftly by Opie Bosson, Dynastic broke his maiden in the $1 million feature, having finished second to stablemate Grace ‘n’ Grey (Spirit Of Boom) on debut on Boxing Day when he raced wide, was green and erratic at times and then was not knocked about in the final stages.

Yesterday, from gate four with blinkers applied for the first time, he raced midfield on the rail with Bosson stealing ground wherever he could. Popping off the fence at the 500 metres, Dynastic still showed a tendency to lug out around the corner, as he did on debut, but this time he quickly ranged up to the leaders and raced on by.

Previously unbeaten filly Wolverine (Tivaci) tried to match strides but eventually faded, finishing two and a quarter lengths from Dynastic in second, with the winner’s stablemate Fellini (Belardo) a further length and a quarter away in third.

Richards also had fourth-placed Time Flies (Time Test) to complete a 1-3-4 for the trainer and the 32-year-old was full of emotion after once again dominating New Zealand’s premier two-year-old contest.

“What an amazing thrill to get six in a row and to have Almanzor get his first New Zealand winner in a $1 million race,” he said. “I’m delighted for Brendan and Jo and everybody at Cambridge Stud, also all of our staff at home. Dave (Ellis) has done it again and that man on top, what a champion.

“As everyone knows, things are going to change for me in the near future and hopefully we are not finished yet. There are plenty of options for a colt like him as what he is doing at the moment is really a bonus for what he will do next year.”

Bred by Windsor Park Stud in partnership with long-time client John Thompson and his wife Margaret, Dynastic was purchased by Ellis for $360,000 from Windsor Park at last year’s Karaka Premier Yearling Sale and Ellis admitted to being overwhelmed at Te Akau’s dominance.

“It was just amazing and I was so emotional when Karyn (Fenton-Ellis) said go and lead the horse back in, I nearly had tears streaming down my cheeks,” he said. “This is such a fun night and an amazing effort from our whole staff who prepare these horses.

“Jamie has done a great job as has Opie and I’m thrilled to have Cambridge Stud, Waikato Stud and Windsor Park supporting us in a horse like this.”

Dynastic is the third foal to race out of Avondale winner Meir (Volksraad), herself a half-sister to Listed winner Lady Le Fay (Thorn Park).

A half-brother to Dynastic, by Windsor Park Stud’s Mongolian Khan (Holy Roman Emperor), will be sold as Lot 929 during the Book 2 sale at Karaka, which gets underway on March 10.

The Karaka Million 2YO was the second of three winners for Richards on the six-race Ellerslie card, after Sword Of State (3 c Snitzel – In The Vanguard by Encosta De Lago) – sporting the black and yellow checks of the Lindsays – returned for a fitting victory in the Cambridge Stud Almanzor Trophy (Gr 3, 1200m).