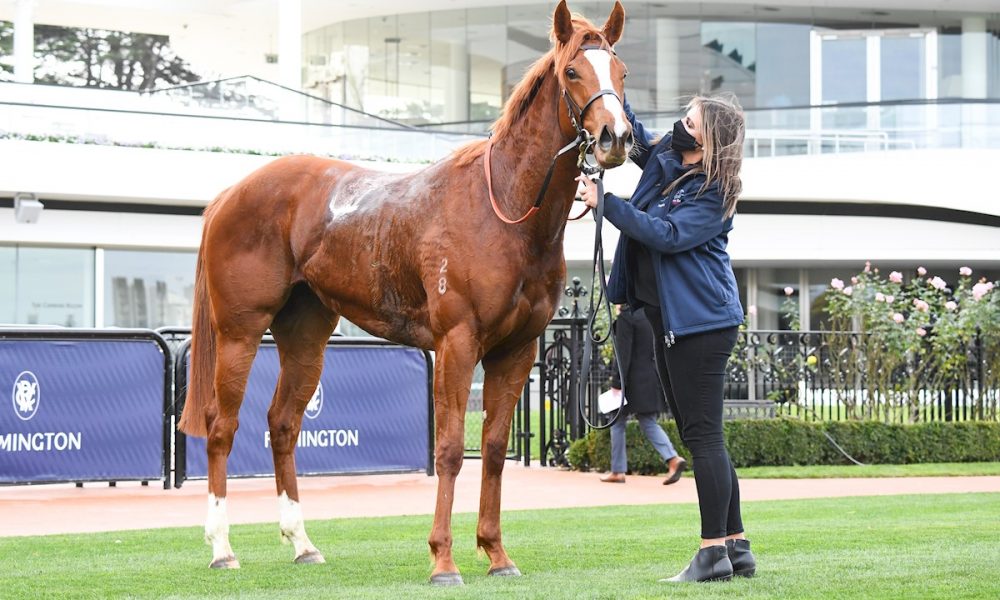 Rarely would you see the progeny of three such illustrious racemares complete a trifecta as they did in the 1100-metre two-year-old fillies’ handicap at Flemington on Saturday.

Argentia powered home first on debut, one and three-quarter lengths ahead of Viviane, with Invincible Caviar a further half-length back in third.

And how’s this for a trio of worthies as their dams? Princess Coup, Curtana, and one of the three great mares of the century, Black Caviar.

Curtana, by Exceed And Excel, was a dual Listed-winning speedster, second in Star Witness’ Coolmore Stud Stakes (Gr 1, 1200m) of 2010, and was fourth in the Patinack Classic (Gr 1, 1200m) a year later – behind that aforementioned stablemate, Black Caviar, whose deeds you probably already know about.

The sires from that trifecta weren’t that shabby either.

Argentia’s win kicked off a massive day for Frankel, in which his son Adayar won the Epsom Derby (Gr 1, 1m 4f) to shoot his father above his own great sire Galileo at the top of this year’s Britain and Ireland stallions’ standings.

It seems Frankel can provide you winners even when, in a way, you don’t necessarily want them. As documented in this column previously, Evergreen Stud’s Tony Bott sent Princess Coup to England for a southern hemisphere cover from Frankel, hoping for a colt. He flew her home once she was confirmed as in-foal, only to regret that when she was found to be carrying a filly.

Bott nimbly changed course and bought the Shamardal mare Conversely in foal, with a colt, to Frankel, and opted to sell the filly.

The colt, raced by Bott and trained by son Adrian with Gai Waterhouse, has turned out to be Converge, who’s won twice and been Group 1-placed from five starts, and will attempt to break through at the top level in Saturday’s JJ Atkins Plate (Gr 1, 1600m) at Eagle Farm.

The filly realised $670,000 at last year’s Inglis Easter Yearling Sale, and is of course Argentia, who’s promising major things for her owner John Camilleri, breeder of one of the other ‘big three’ mares in Winx. Tony Bott doesn’t regret selling the filly – he’s eyeing ample compensation through Converge – but feels he might have played things differently if given the chance again at a mating that came about through a little dose of happenstance.

“It really was the old adage – put the best to the best and hope for the best. We loved Frankel as a racehorse, and it turned out Princess Coup was empty that year – we’d given her a year off – so we sent her over there, hoping for a colt. But I think I made a slight mistake in bringing her back home straight away,” says Bott, who could have left Princess Coup in England and tried again if she had a filly. (Most likely, Argentia would have come to Australia to race in any case, since Bott knows there’d be little sale value in a southern hemisphere–timed yearling offered in England).

“If I did it again, because of the distance and everything else, I’d probably leave Princess Coup there. But when she’s the major broodmare in your band you don’t want them away from home for too long. You worry about things. Still, if she’d had a colt it might not have been as good as this filly.”

It often doesn’t work, of course, when the best racemares go to stud. Of these three, Curtana – she with the third-best race record – has had the most success. Her five named foals are headed by Viviane’s Ellerton-Zahra stablemate Sword Of Mercy, a multiple Melbourne winner who’s been twice stakes-placed. Her first one, Dame Eleanor, won three from nine in South Africa.

Black Caviar’s six named foals have performed moderately, with Oscietra and Prince Of Caviar recording provincial wins before being retired after a handful of starts each, though there’s more hope in the great mare’s physical likeness, Invincible Caviar.

But what we may be seeing in Argentia, with help from Frankel, is the crowning glory of Princess Coup’s stud career.

Bott struck hard in buying the mare at the 2009 Magic Millions Broodmare sale. In fact, the $3 million he paid was the most expensive price for any horse sold through a Magic Millions ring, a record that stood until Listen Here went as a broodmare for $3.4 million in 2016, topped by Sunlight’s $4.2 million last year.

“Her pedigree and race performance attracted us first,” Bott says, “and then seeing her in the flesh for the first time at the sale, she was one of the best moving sort of animals I’d seen.

“She ticked all the boxes. Still, we weren’t planning on going that high for her, but call it the heat of the battle or whatever, we kept sticking our hand up.”

Princess Coup’s direct results have been solid, if short of spectacular.

Her first named foal Vanilla Princess (Lonhro) was a Randwick winner, but her second was far better. Thewizardofoz (Redoute’s Choice) raced in Hong Kong and won four of his first six starts to be named Griffin (new import) of the Year for 2015. He won only two more races – though one of those was the Premier Cup (Gr 3, 1400m) in 2017.

His sister Abatha was unplaced. Legendofoz (Fastnet Rock) has won a Goulburn maiden, while his little sister Princess Mia won at Gosford and Hawkesbury. Mistress Oz (Snitzel) was unraced, while a third Redoute’s Choice, Dorothy Of Oz, won at Hawkesbury and Warwick Farm.

Next up came Argentia – perhaps the proof that, despite now rising 18, Princess Coup has ascended to a new level as a broodmare.

This provides hope for her latest stock. She has a Sebring yearling colt Bott has retained and an I Am Invincible weanling filly, and is in foal to Dundeel. Yet Bott eyes his prized broodmare for more than just her offspring. For example, he still owns Vanilla Princess, whose second named foal Key, a filly by Exceed And Excel, fetched $550,000 as a yearling on the Gold Coast in 2019, had a Group 3 second in New Zealand, and has now transferred to Matthew Dale in NSW.

“Princess Coup hasn’t quite been a golden goose but she’s done a more than decent job for us,” Bott says.

“I might have had a bit of a rush of blood in paying what I did for her, but she’s been a good breeder, thrown a couple of handy types and we’ve got a number of her daughters to continue the line.

“Whether we’d be totally in the black now, I’m not sure. But it depends how you value the residuals. Her weanling is going to be a very valuable commodity, being by I Am Invincible and a half-sister to Argentia. We’ve already had a couple of enquiries about the weanling since Saturday.

“Princess Coup doesn’t look her age and is in very good condition and everything looks rosy. She was a bit independent when she first came here, to be honest, but she seems to have settled over the past few years to be more matronly.

“We’re happy to have her and she seems to enjoy life here as well.”