Aussie presence in Newmarket as international travel continues to opens up 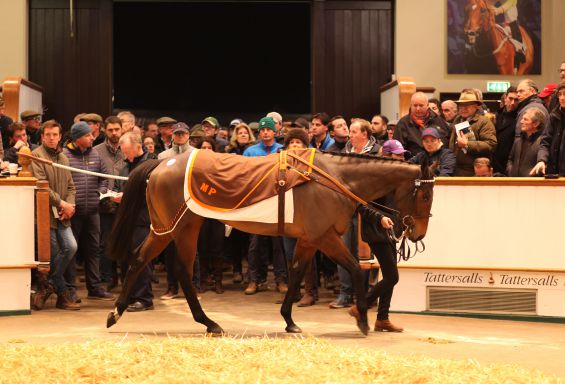 Restrictions imposed by Covid-19 have not presented a prohibitive barrier for Australian buyers in their quest for sourcing high quality mares and race fillies to bolster their broodmare ranks.

And, after significant Australian expenditure in the US, the show rolls on to Europe and the Tattersalls December Mare Sale which, touted by Tattersalls as ‘the world’s most international bloodstock sale’, begins today.

The incremental reopening of global borders has presented the opportunity for a select group of Australian buyers to be present at the flagship auction, although uncertainty surrounding recent outbreaks of new variants of the disease and the risk of the sale’s proximity to next year’s domestic yearling sales will see the majority of players working the sale from Australia and New Zealand, or via a European agent on the ground at Tattersalls.

“I am in contact with a vast number of Aussies, rounding them up for the December Mares sale,” said Tattersalls’ Australia and New Zealand representative Jenny McAlpine, who has remained in Australia herself for this year’s sale.

“Usually, I would have about 20-plus Australians on the ground with me at the December Mares Sale, but with our continued state border restrictions and changing government quarantine rules, most decided it was too risky to travel.

“If something went wrong and one was not permitted to board the homebound flight, with full flights, the likelihood of getting another seat before Christmas could be dubious. Very importantly, they would all need to get to the Magic Millions Gold Coast Yearling Sale in January. So the timing looked too tight to most in the case of a hiccup in getting back to Australia.

“In saying that, we are very accustomed to online buying in Australia so the importance of vendors posting photos and videos cannot be stressed enough.”

However, what the last 18 months of Covid-enduced restrictions has seen the Australian racing public borne witness to is the success of pre-pandemic purchases from the Tattersalls sale.

In 2016, Yulong came away with Pivotal (Polar Falcon) mare Harlech for 60,000gns, who would then be covered by Frankel (Galileo) to produce Australian dual Group 1 winner Hungry Heart. Moreover, the Darby Racing-owned Group 2-winning and Group 1-placed mare Greysful Glamour (Stratum) is out of Ripplied (Dalakhani), a 15,000gns buy for John Foote from the 2012 December Mares Sale.

Rosemont, too, has had recent on track success with a mare sourced from this sale, going back to 2007 when Joint Aspiration (Pivotal) sold for 320,000gns to French Bloodstock Agency. Subsequently acquired by Rosemont, the mare produced this year’s Dane Ripper Stakes (Gr 2, 1400m) winner Brooklyn Hustle (Starspangledbanner).

Ryan McEvoy, Rosemont’s general manager of bloodstock, has made the trip to the UK to continue the Victorian Stud’s search for quality broodmares, having already shelled out in excess of US$2 million at Fasig-Tipton’s November Sale earlier this month. He is joined by Catheryne Bruggeman, partner of Paul Moroney, who sourced three mares in the US prior to her arrival in the UK, while Coolmore’s Tom Magnier is also on the ground in Newmarket.

“We’ll keep an open mind. We’ve been actively looking to increase the quality of our broodmare band so this fits in with the masterplan,” McEvoy said from Tattersalls yesterday.

“We’ve got a tremendous respect for the European thoroughbred and certainly the depth of quality on offer in the catalogue is appealing. Ultimately, you’ve got to look globally for quality, and we’ll be looking at mares here particularly on days one and day two.”

The growth in participation at overseas breeding stock sales has, primarily, been spurred by a desire for new bloodlines to dilute the Danehill- (Danzig) heavy presence in Australia. And with Rosemont, that has not been limited to the mares they are sourcing, with the stud utilising overseas coverings to stallions such as Juddmonte’s Frankel, before bringing the mares back to Australia.

“That’s the appeal, is to add a bit more diversity into our broodmare band and acquire some mares that aren’t as problematic to mate,” McEvoy added.

“We’ve got a couple of mares over here at the moment that are on the path to (have an overseas cover). But, absolutely, that would be one part of our mission to find a mare for that this year, too.”

This year’s catalogue sees 1,170 lots listed across the four-day sale, with consignments dominated by entries from breeding powerhouses Godolphin, Juddmonte and Shadwell, who continue their scaling back of the late Sheikh Hamdan bin Rashid-founded operation with 78 race fillies and mares set to go under the hammer.

Opportunities include mares in foal to Juddmonte’s Frankel and Kingman (Invincible Spirit), while eight mares are offered in foal to Night Of Thunder (Dubawi).

The catalogue includes two mares in foal to southern hemisphere time, namely the stakes-performed Sadler’s Wells (Northern Dancer) mare Indiana Wells, who is catalogued as Lot 1736 and is in foal to Siyouni (Pivotal), and Lot 1808, the US stakes-placed mare Salsa Bella (Siyouni) who is foal to Frankel (Galileo).

Five mares by Redoute’s Choice (Danehill) are offered over the coming four days, including Wynola, a daughter of the aforementioned Indiana Wells, who is in foal to Haunui Farm shuttler Ribchester (Iffraaj), and the stakes-placed Astronomy’s Choice, who is foal to Darley shuttler Blue Point (Shamardal).