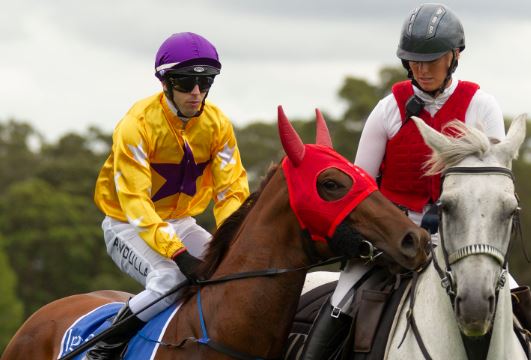 Victory was a long time coming for Bella Nipotina (Pride Of Dubai) and it seemed certain to arrive at any moment.

When it did happen, though, it seems that it came as a shock to most people.

Sent off as 20-1 chance in what looked a strong running of the Quezette Stakes (Group 3, 1100m) – featuring past ANZ Bloodstock News Maidens of the Week like Parlophone (I Am Invincible) and Aryaaf (Epaulette) as well as stakes winners River Night (Night Of Thunder) and Supreme Idea (I Am Invincible) – Bella Nipotina was one of a trio of leaders in the early stages.

Travelling strongly throughout, she never really looked in doubt once rider Michael Rodd switched on the afterburners, putting a margin on her rivals before holding them at bay to score by two lengths.

River Night was the closest of the pursuers, closing off steadily to grab second, while Aquagirl (Headwater) outran her 50-1 quote in finishing third, two and three-quarter lengths behind the winner. Notably, first, second and third were all by new second season sires.

While it may have been a shock to the market, Bella Nipotina managed to justify the faith of her co-trainers Tom Dabernig and Ben Hayes with her dominant effort.

“She has been a very unlucky horse in her races to date, she has been knocked off by some really nice horses,” Hayes said. “Off her trials it looked like she had really improved but we weren’t sure.

“We were going to go to a maiden but she trialled so well so we changed plans and we went here to go to a stakes race so it was a very good decision. It was a huge result.”

A veteran of rich races, predominantly stakes events, as a two-year-old, the Lindsay Park filly had not performed poorly by any stretch of the imagination as a juvenile.

(Notably, Sweet Embrace runner-up Stellar Pauline (Not A Single Doubt), who was also competitive without winning at two, broke her maiden yesterday at Hawkesbury.)

Bred by Michael Christian’s Saconi Thoroughbreds, Bella Nipotina is the first foal out of Bella Orfana (Star Witness), a Geelong placegetter in her short racing career.

The filly now named Bella Nipotina fetched $80,000 at Book 1 of the 2019 Inglis Melbourne Premier Yearling Sale from the draft of Rosemont Stud. Acquiring her was a joint bid from Lindsay Park, Mt Hallowell Stud – in whose colours she races – and Andrew Williams Bloodstock.

Bella Orfana’s second foal, a filly by Capitalist (Written Tycoon), was passed in for $100,000 at Melbourne Premier this year; the mare is due to foal down to Trapeze Artist (Snitzel) later this year.

Bella Nipotina boasts an all-Australian pedigree, stretching back eight generations on her dam’s side.

Her second dam Bella Inez (Beautiful Crown) was a sister to Caulfield Guineas (Gr 1, 1600m) and Golden Rose (1400m) hero In Top Swing, while in the breeding barn, she has been a prolific producer.