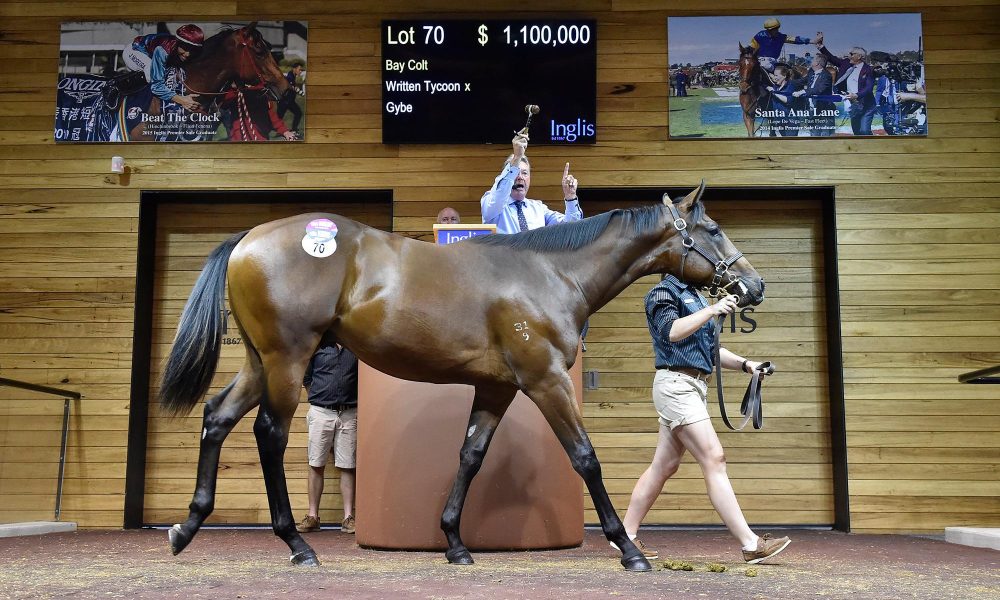 Blue Gum Farm principal Philip Campbell concedes he’s unsure whether the pressure is on or off ahead of the 2022 Inglis Melbourne Premier Yearling Sale after his operation has topped the auction’s aggregate for the past three years and produced the top–priced lot at each of the past two sales.

“Put it this way, we’re not sitting here thinking that will necessarily happen again but you’re always hopeful. If you’d asked me six weeks out from last year’s sale, I’d have said ‘we have a really nice group of horses but probably no sales toppers’, so there you go. A lot can happen, and does in the five or six weeks leading into any sale,” Campbell said.

“Those consistent gains have largely been across the board as Inglis have done a fantastic job with this sale and to average just over $200,000 last year was as pleasing as any other result and hopefully it can continue.

“There doesn’t appear to be any sign of it letting up. The appetite is there for horses against the backdrop of great prize–money levels and the various incentive schemes. The clearance rate at Magic Millions was amazing and if there’s been any positive from this dreadful pandemic then it’s that a lot of people have engaged with racing.

“Racing has been able to maintain its flow while there’s been limited other forms of entertainment and people have been drawn, I think, to become more directly involved,” he said.

Campbell said the yearling preparation for this year has gone as smoothly as he could have hoped, despite the constant threat posed by Covid-19.

“We’ve been very fortunate with our staff having managed to avoid Covid and they’ve done their usual fantastic job. Supply has been some issue but more with things like machinery parts rather than anything we need directly for the horses.

“Again, I would say this year we have another very good draft of horses but you’d have to be Nostradamus to predict what they’ll sell for. Selling each horse to the top end of his or her scale is the goal. If we do that then I’m happy. Often it’s as satisfying when someone says ‘how the hell did you get that price for that horse with that pedigree’ and you say it was a great type presented to its best.

“Topping the sale is nice but we’re not hung up on that. There’s so many good farms represented and the reality is that the more nice horses there are on the sales ground, wherever they come from, then that strengthens the buying bench,” he said.

Last year’s top lot was the Written Tycoon out of Gybe colt, bred by Rob and Sylvie Crabtree’s Dorrington Park, and bought by James Harron at $1.1 million. It was just the second seven–figure lot sold in Melbourne.

The horse is named Crosswinds and is in work with Anthony and Sam Freedman.

“It was emotional. I can be a bit like that,” Campbell concedes. “It’s about what goes into it behind the scenes. The blood, sweat and tears and knowing that so many things can go wrong. We knew he was potentially a big ticket item but you never know how big, so it’s a huge relief. Rob and Sylvie (Crabtree) had entrusted us with the horse.

“The whole process is not a cheap exercise and with good people, like them, you want to look after them as best as you can. They’ve supported us again this year with eight lots from a good selection of stallions and I’m sure they’ll be met with great acceptance,” he said.

The 2020 top lot, at $725,000, was Bruckner who completed his spring campaign with a second in the Group 1 Coolmore Stud Stakes. He was bred by long term clients Neville and Susan Duncan’s Oakland Park.

“It’s OK to sell well but, at some point, you’ve got to see them run well and Bruckner has done that. Bruckner, I’m told, has thickened up and really spelled well with the hope there’s more to come from him. The Duncans are great breeders who produce horses who can run and they meet the market,” he said. Oakland Park has four yearlings under the Blue Gum banner in 2022.

“There’s a story, a reason behind every yearling as to why you’d hope they would sell well but I would like to see this filly do well as Brianna and Damien are friends. We send our mares and our client’s mares to their farm when heading to the Hunter Valley. I think Extreme Choice has done a great job from his numbers and any of his stock will attract interest,” Campbell said.

Blue Gum’s proud sales history began in 1981 when it became the first to sell a yearling for over $100,000 in Victoria.